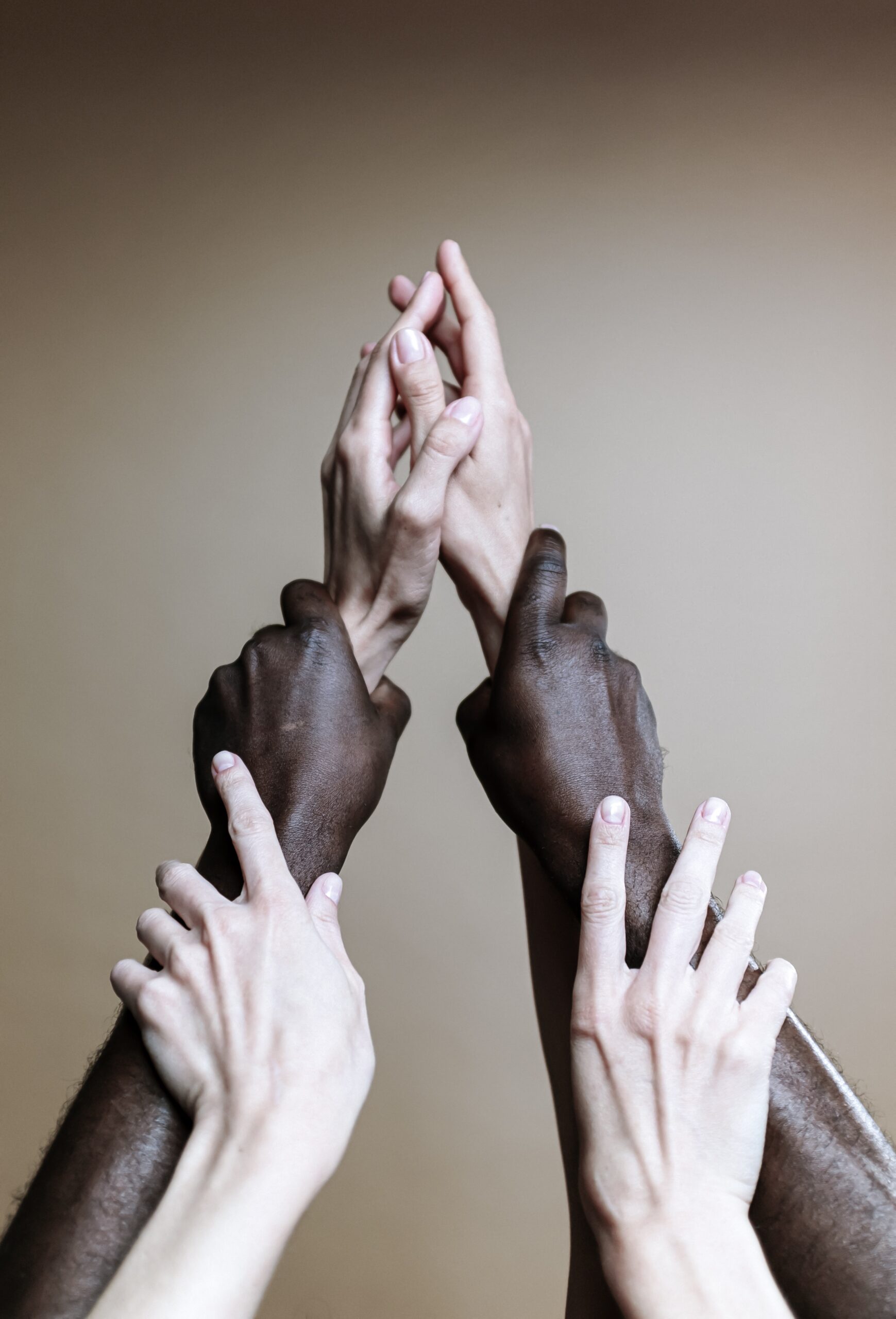 Before going into the meat of this section, let’s talk about triads and dyads a little bit, and the representation of patterns on them, so people know what they are looking at. A warning that this post is a bit longer than I intend to make them, partially because of this additional section in the beginning. Those of you familiar with SenseMaker are welcome to skip this paragraph and the next one, but I hope it will make this series more accessible to everyone who is not.

As covered in the previous post, we asked people to share an action they have seen taken that will have an impact on climate change, large or small, positive or negative, or anything in between. A series of triads and dyads followed to use in reflecting on and interpreting their stories. We call these “signifiers”. A triad, which is the type of signifier that might be most unfamiliar to people, asks the participant to situate their response in relation to three concepts simultaneously. The stronger the pull, or influence of each corner, the closer to that corner the response is placed. For this to work, the three corners of a triad cannot be mutually exclusive. We are not looking at a list of options here but a balance or tension between three interrelated ones.

On the “results” side, this looks like a triangle covered by dots, where every dot is a story. These stories come together in clusters and form patterns to show which of the concepts exercise a stronger gravitational pull on experiences; they reveal dominant patterns and outliers. By clicking on a dot/story, we can see the context behind it. Many of those contexts put together allow us to get at some of the meaning behind the pattern. On the other hand, dyads ask the participant to situate their response in a spectrum between two concepts. They are often visually represented as a histogram, where a bin is taller the more stories fall within it. Now armed with this introductory information, let’s move on to a critical question behind this study: the impact of small actions, implicit in the prompt people were given. So let’s take a look at three dyads that are related to that question:

The first one looks at the size of the contribution shared and shows a major skew towards the left-hand side: people tended to share contributions they considered significant. The second dyad looks at the scalability of the action people have shared; in other words, if it has broader applicability, if it can be repeated. This shows an even stronger tendency towards the right-hand side, suggesting that participants considered most of the contributions scalable, as well as significant. One question that emerges is, do these two things go together? Are people, in general, talking about actions that are both significant and scalable?

A filter can help us answer that question with an (absolutely expected, since the emphasis on scalable is so great) confirmation: when we filter for stories skewed towards significant, the same stories are also heavily skewed towards scalable. In people’s minds, the two could be associated in the stories that were significant enough to them to share.

(In case you are wondering, those two graphs look different because they come from a different tool looking at the same dataset). 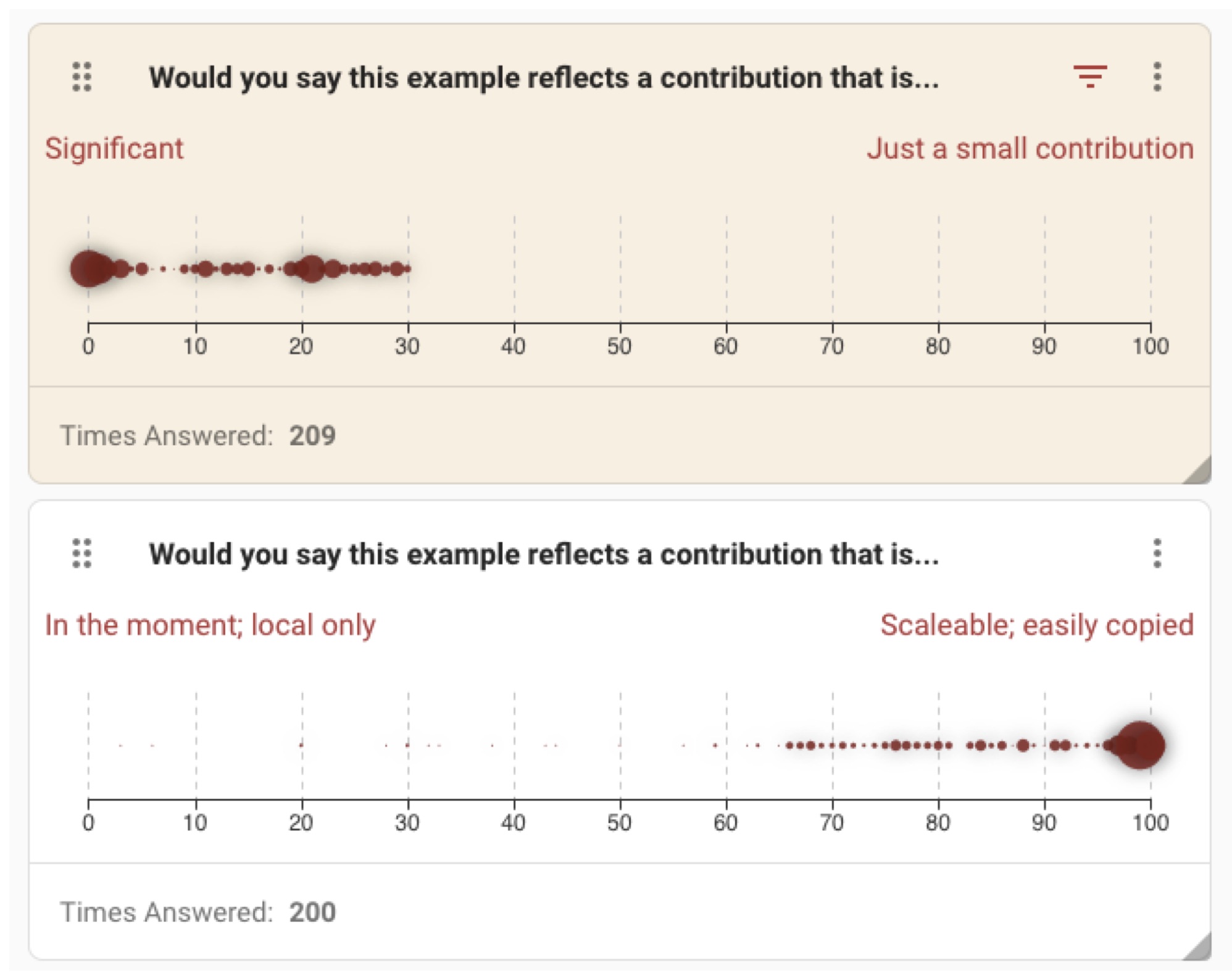 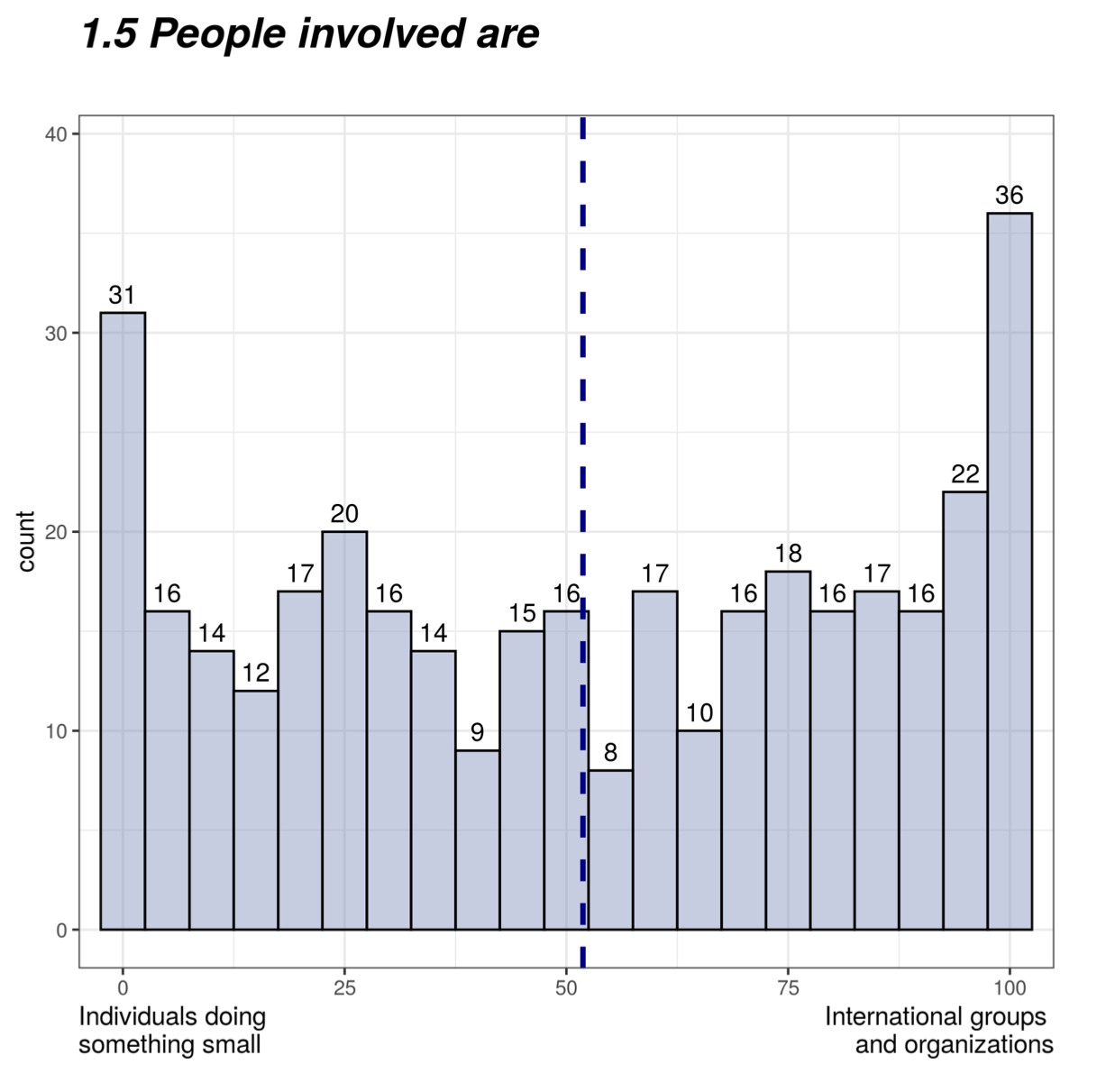 Finally, a third dyad gives us another way to think about scale; the scale of the agent undertaking the action, and here we see an altogether different pattern: there are stories scattered all along the scale, with an emphasis on the extreme ends. This means that the mean (shown here by the dotted line) falls almost dead in the middle, a position that is definitely not the whole story, given the very broad spread of micro-narratives here. While we are at it, the discussion of the nature of SenseMaker data and which central tendency measures (things like averages, or medians) are meaningful for it is a separate but very interesting conversation. For now, let’s just keep in mind that a mean or median is a useful tool that we also need to look beyond.

A broad spread is often a good opportunity to apply filters, and see how that modifies a seemingly balanced landscape. So keeping that in mind, let’s take a look at a couple of emotional associations in people’s stories that seem to change the balance: I find the second one particularly interesting; the greater involvement of large structure beyond our control (and perhaps understanding), is associated with a greater sense of paralysis.

Finally, let’s take a look at a couple of the actions contributed by participants that were interpreted as both significant and scalable :

Greta Thunberg has been inspiring millions of people around the world mobilizing and asking to the governement real actions to deal with climate change and the consequences accordinlly the UN forecast. As a youth girl, shows some awareness level from the next generation regarding the Earth health and life conditons.

Our municipal government supports through policy and action the following activities: – low impact lighting in some neighbourhoods, – residential housing developments that include prairie grass landscaping. Once developed, the municipality maintains the grasses – citizen identified desire for more and safer walking and biking pathways. -further development of our municipality’s portion of the Canada Trail system

Next Series: Part 4.1: Individual, collective, other

Previous Series: Part 2: A background to the patterns

In the next post we will be relying a bit more heavily on triads to look at different actors and scales of action, expectations, and responsibility. Stay tuned!

Hands image by cottonbro from Pexels

Looking back at the Acorn Study; Part 2: A background to the patterns

Almost every SenseMaker collection, no matter what it is, contains some garden-variety multiple-choice questions. These ...

I’ve given a fair number of talks over the last year around the general theme ...