This week we are looking at the dimension of time. Time is a central concept in all kinds of contexts, and it is an anchor that is often used when people interpret their stories. The core ideas of past, present, and future can take on different labels and nuances depending on the specific nature and context of a collection, and they do just that here as well. Moreover, by positioning the story in relationship with all three of these we subvert a little bit the linear approach to time, at the same time as using it as a heuristic (a useful tool). 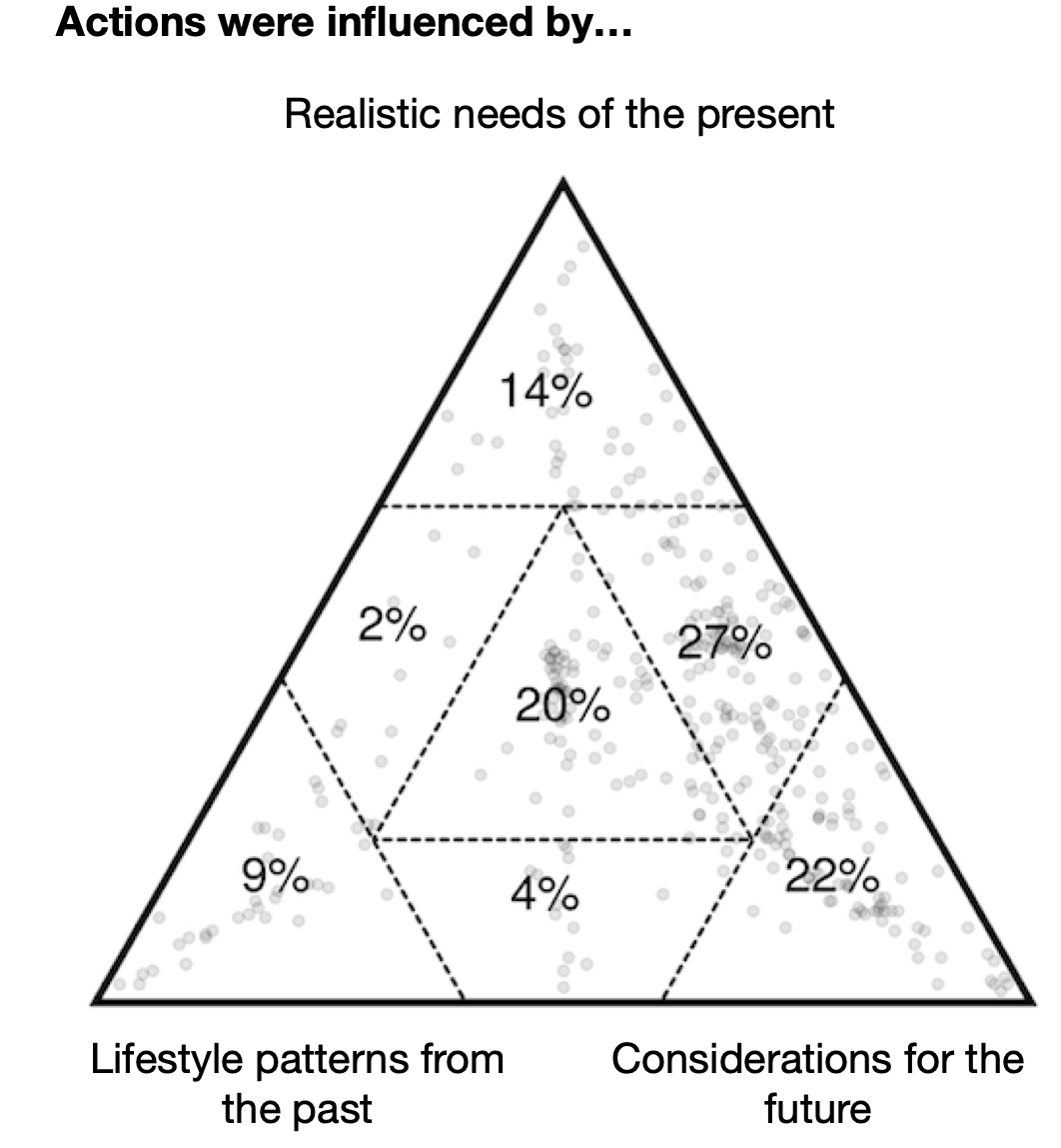 So, starting with the triad that is explicitly positioning the little piece of narrative in relation to past, present and future, we can see the gravitational pull of the future in action, with actions seen as influenced by balancing the present and the future, or by focusing mostly on considerations for the future. A non-negligible cluster of stories is also located at the triad’s centre, combining all dimensions of time (or perhaps seen as more timeless). The past and the present by themselves are seen as outliers more than anything else.

Now let’s apply some filters to that overall picture and look at how these dimensions of time might interact with the emotions that were present in participants’ narratives: 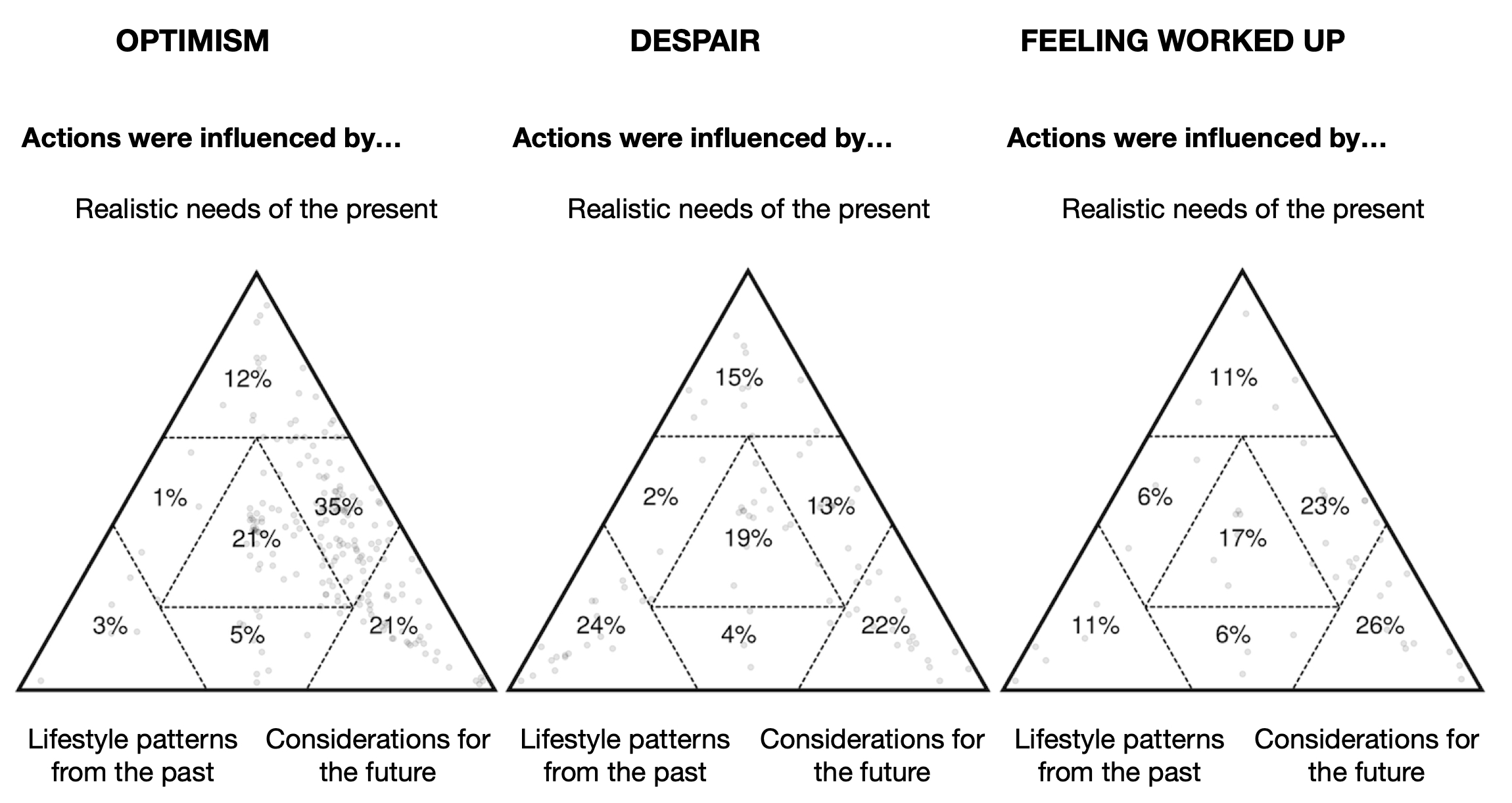 As we can see, the prevailing emotion in the story is associated with different patterns when it comes to how time is understood and experienced. In stories where people feel optimistic, there is an even greater emphasis on balancing the present and future. That can mean that people are sensing the mobilisation of capabilities of the present in those stories and their power to affect change in the future – the two are more closely interconnected here. On the other hand, in micro-narratives of despair, there is a cluster of stories looking towards the past, which is just an outlier in the unfiltered pattern. In this collection, associations with the past appear to be primarily negative; the things we need to leave behind rather than what we might want to return to. And when people feel worked up, when they want to get up and do stuff, they look even more towards the future.

I wonder about this pattern. For many, the past might not be a rich source of strength and knowledge, a grounding influence. Instead, it is something to move away from. I can see why that might be, but I do find it a bit sad. Let’s take a look at a couple of stories associated with the past, to get a feeling for this:

Nairobi was described as the city under the sun. Where back in the 80s and 90s we never missed the patterns of long rain and short rains. Also, the weather was supper. Late Professor Wangari Mathai to her initiative to influenced my school to plant trees. Needless She saved Uhuru Park (carbon sinking) and part of Karura forest and other wetlands. Nairobi in daylight its nightmare of Carbon emissions, wetlands destroyed Nairobi national park human encroachment. Nairobi river its a damping site. Ones did a survey in Nairobi dumping site environ, the experience of respiratory diseases was alarming

I was listening to a presentation by a market researcher last week who shared insights from her work with understanding how to market electric cars. She said that interestingly enough, the e-cars are very suitable in terms of it’s messaging, to the average American. The cost savings and additional benefits appeal to the middle class value structure. However, some unexpected things are what’s getting in the way of broader adoption. She said that people still have a habitual behaviour of going to the gas station, and that they cannot yet understand that with e-cars, you actually start the day with a full tank of gas everyday. 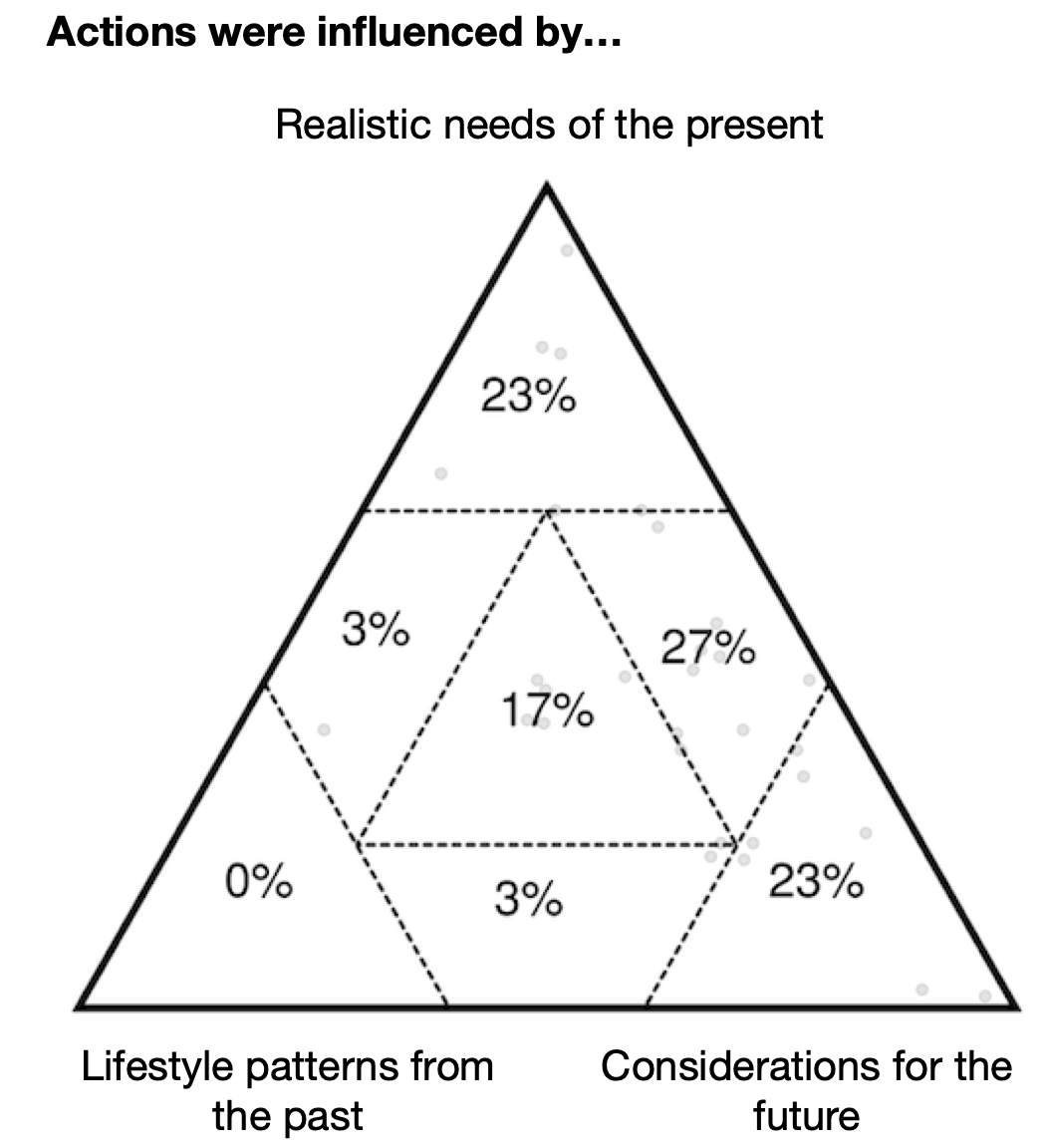 One of the multiple-choice questions offered to the participants (one more way they can add context and dimensions to their story) asked them to choose among four questions that might be relevant to the action they shared. A future instalment of this series will focus specifically on those questions. For now, I want to draw attention to those who selected “What could we bring back that could help us with these difficult times” as relevant to their stories, since it directly has to do with time. You can see the pattern of the stories this was relevant to on the left. Fascinatingly, things that we can “bring back” are not about the past for participants, but about the present and the future.

Without much comment, let’s also take a look at some patterns in the same triad, split according to the age of the participant: 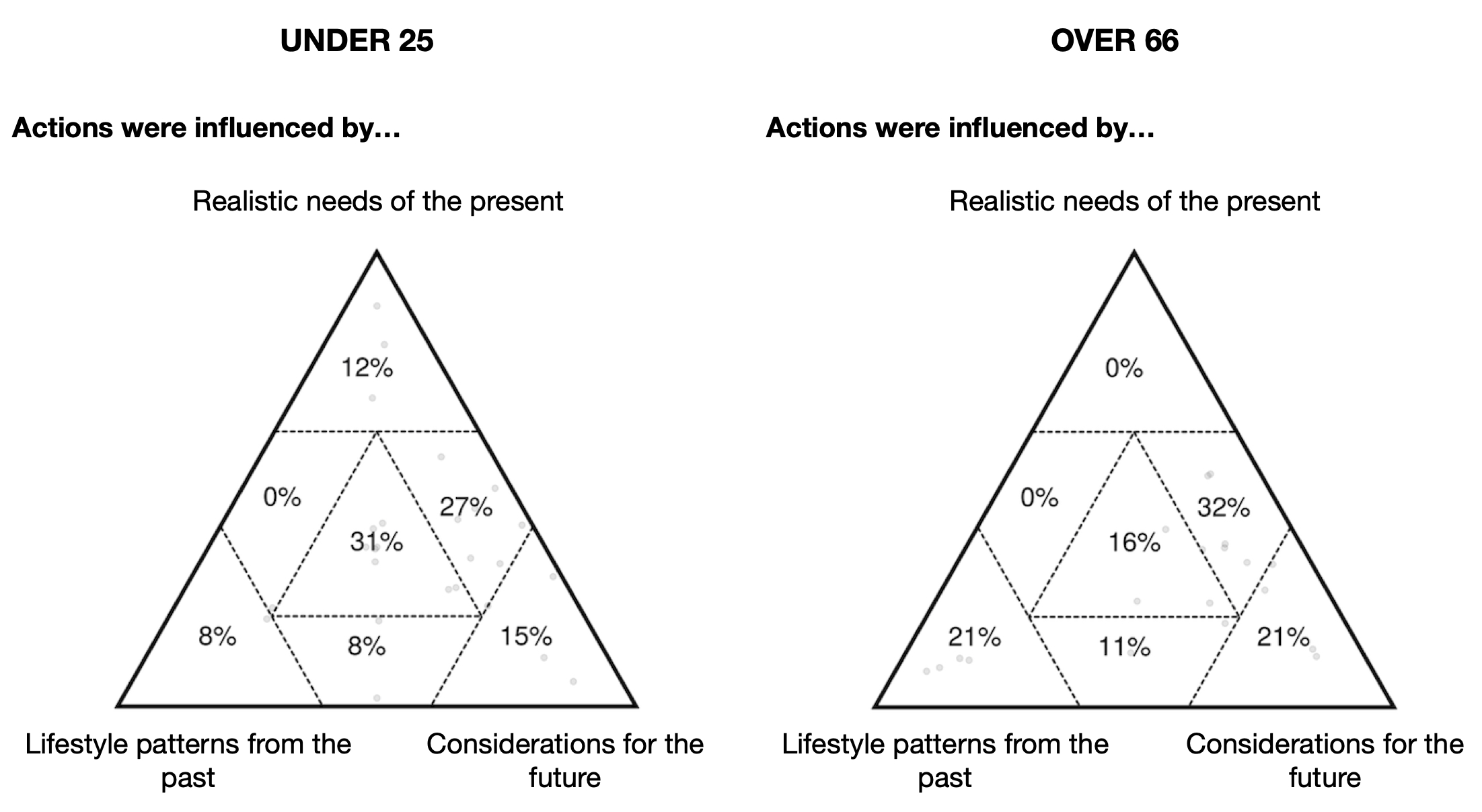 I want to close this (already far too long) post by referring to a different triad, which looks at what influenced or motivated the example or action people shared. One of the corners of the triad (and therefore one of the possible influences people could identify) were the needs of future generations: 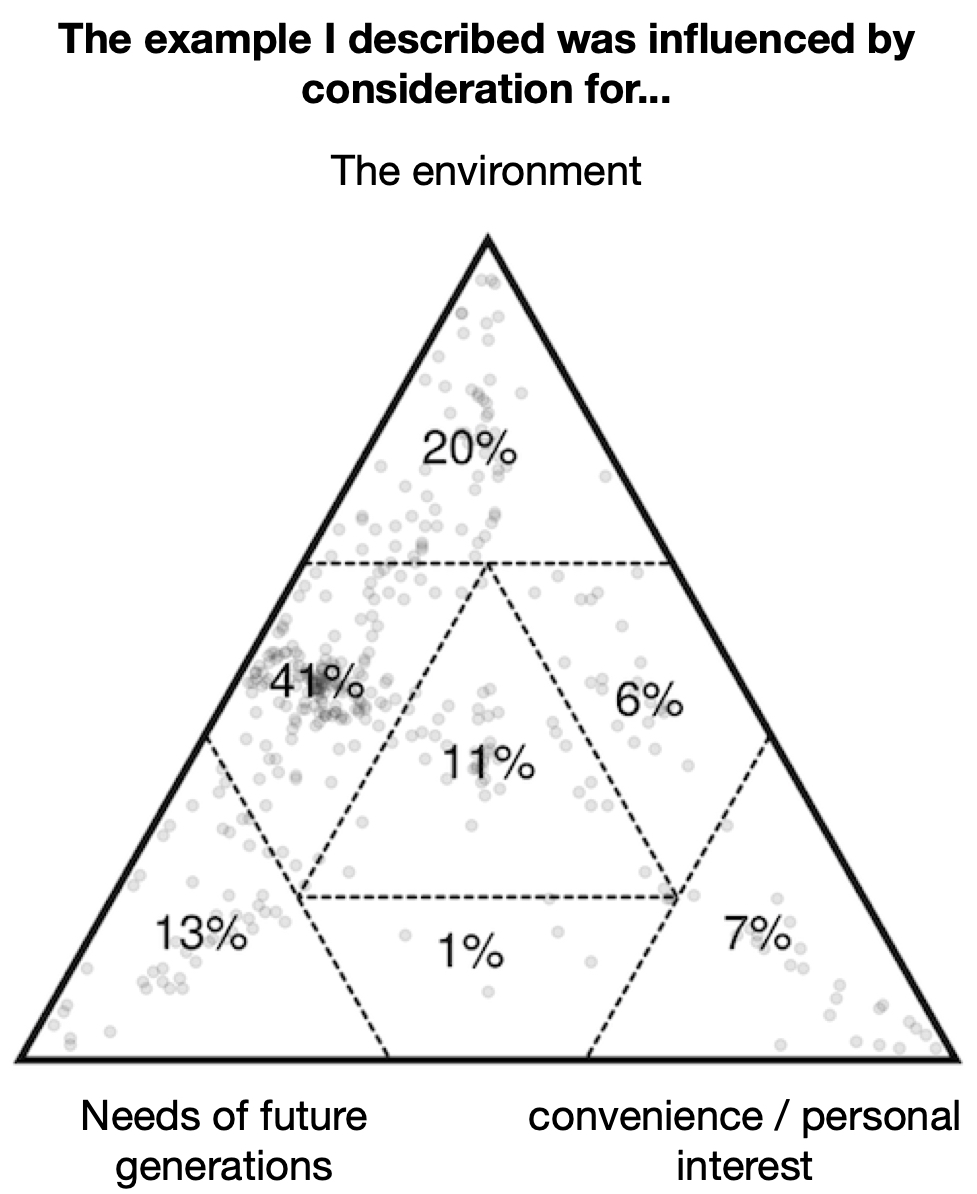 You can see that the interplay between the world we will hand over to future generations (I think by now I am old enough to have crossed over to the side of the bequeathers, rather than the heirs, of the world) is primarily between the environment and meeting their needs. For this final section, I want to look at the outlier stories in this left-hand corner.

There are 50 micro-narratives and examples located in that region. Of those, a third (18) make mention of the Fridays For Future, climate strikes and youth protests in some capacity, some making explicit connections to Greta Thunberg’s activity. Incidentally, the latter features in examples shared overall so often that she could constitute a theme all on her own. However, the web of interactions that she is a part of is more interesting than any individual. This web is a mesh of the most extensive collective actions taken around climate change in a long time, with global resonances (which are confirmed by the fact that those stories come from across languages and countries), and an increasing feeling of urgency mostly felt by (and attributed to) children and teenagers.

In the next installment, we are going to explore information, knowledge, action, and their sources and connections.

In-line image is a detail from Venus, Cupid, Folly and Time by Bronzino, Public domain, via Wikimedia Commons

Without further ado, let’s pick up where we left off last week! We ended the post ...

Looking back at the Acorn Study; Part 6: Knowledge and information – always needing more?

As always, let’s start with one of the high-level patterns in our collection: the sources ...