Tag clouds were a popular web visualization fad about 3 years ago. Wordle.net provides a really easy way for you to make and share your own. But rarely is seeing the most frequently-used words in a piece of text very instructive.

Today I figured out how to compare two wordles using python. The difference between two sets of information is far more useful than the information in either text alone. To illustrate, here is an analysis of two rape prevention programs in Nairobi, Kenya.

The Mrembo Program teaches pre-teen girls about boys, sex, and staying healthy in the poor Nairobi neighborhood of Kamukunji. Sita Kimya!, which means “I will not be quiet!” is a USAID-funded program to encourage “young men in Kibera to challenge each other to reject violent behaviors towards women.” — according to USAID. But according to another blog, “Sita Kimya! refers to the vow one should give to not stop yelling if they know sexual abuse is occurring around them.” Which version is right? Maybe these 258 stories collected through the GlobalGiving Storytelling Project will provide a truer view.

Words from the set of 87 Mrembo stories, with the Sita Kimya story words subtracted out:

Words from the 258 Sita Kimya stories, with all Mrembo words subtracted out: 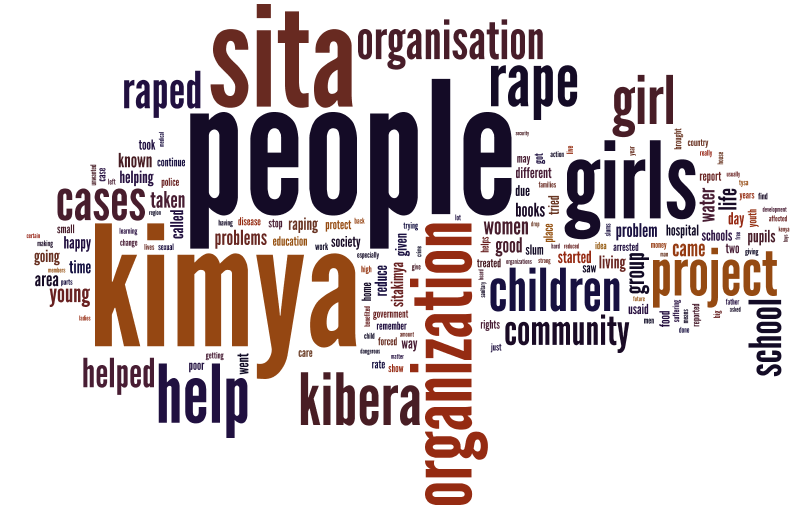 Who offers the broader perspective?

Both groups share stories that reflect success and failure, but Mrembo girls are a bit more likely to think of their story as somewhere in between:

[This image was made using SenseMaker(R).]

Here are several more detailed analyses of these programs, and rape in East Africa:

Italian Lakes: 3 to Iseo or to Idro?

Well there was a plan, and it involved Lake Iseo and the rock paintings of ...

Italian Lakes: 5 The heuristics of finding a place to eat

After the emotion of the previous night and the the early morning return today ...