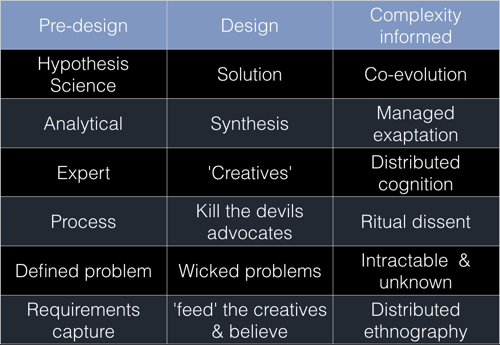 I promised yesterday to republish this table which I created some time ago after I had read Martin’s book on Design Thinking and had a meeting with IDEO over on the West Coast. It was put together quickly and it will be modified before Mary and I complete the draft article so questions and comments are welcome.

The form of this table is one I have used a lot when people contrast their idea with that which went before us. I previously used this approach when I created side casting to contrast with forecasting and backcasting. I extracted the first two columns from Martin’s writing and adding a third to cover a complexity approach. The intent her is part mischievous and therefore serious. I played Anthony at school and always loved his line Now let it work. Mischief, thou art afoot. / Take thou what course thou wilt. It is from the Brutus as “an honourable man” speech in Caesar for those who don’t recognise it; one of the masterpieces of oratory. Mischief is the essence of the trickster in stories and the role of the trickster is to move things to a new place, so I offer it in that spirit.

So if we take each line of the table:

The final one is the most serious so I will return to that tomorrow.

Mary Boone and I spent all day working on our article on Complexity Theory and ...

In Act I of A Midsummer Nights Dream Bottom is asked to play Pyramus, “a ...