The opening line to the chorus to the Hippopotamus song from Flanders and Swann came to mind at several points today.  I'm working on completing the South Downs Way this month and that requires careful attention to the medium term weather forecast and winter timetables for public transport.  So with rain forecast for the weekend and sunny intervals for today I decided to work at the weekend and use today for the Amberley to Cocking section I had originally planned for New Years Day.  That had the advantage of more frequent public transport and the availability of one of my neighbours and friends Bob Gorzynski.  Readers may remember that I wrote the forward to his book The Strategic Mind back in 2009.  The next section from Cocking to Petersfield is with Euan and friend on the 11th which that leaves me two 12 mile sections to complete the walk in Winchester. Saxon capital of England.  Given public transport issues that will need an overnight B&B to complete the walk and fortunately there looks to be a rather good pub in just the right place with rooms.

But back to the mud.  There is a cloying, sticky quality to chalk mud that makes it unique among the various sludges, oozes, clarts and slobs that conspire to exhaust the winter walker.  Its a quality that is augmented by the churning agitation that modern agricultural machinery imposes on otherwise charming tracks.  The picture which heads this post barely does it justice but in the more cloying parts I has concentrating on not slipping, with camera, into the maelstrom. 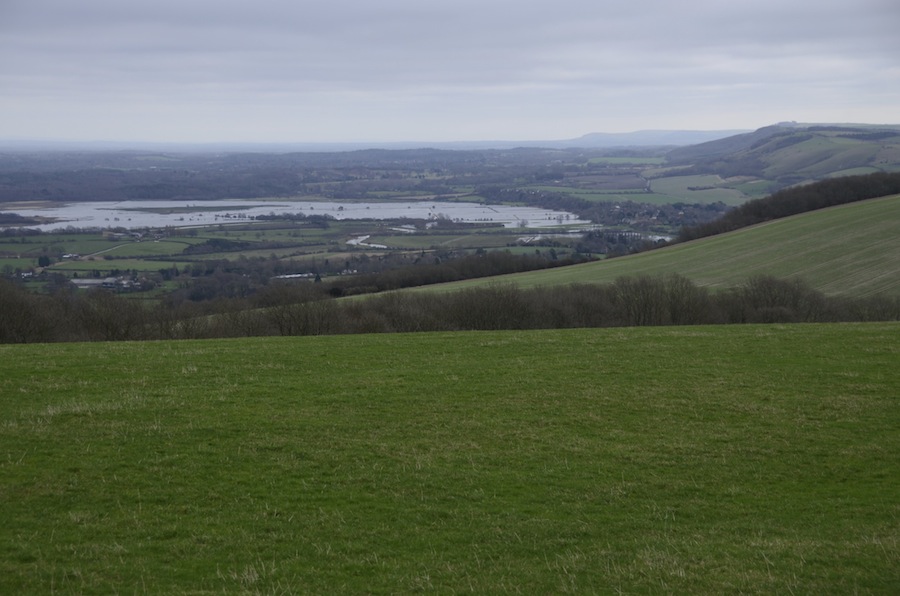 The opening part of the walk was improved over New Years Day as the flood waters had receded from the path if not the valley.  Their extend can be seen in this picture which looks Eastwards along the way.  From there the patter of the walk was a climb up a mud enhanced track, followed by airy downland walking, then a slippery descent down a track the whole process repeated three times.

Between the periods conversation continued, and I had forgotten that Bob's origins are in Poland; obvious when you look at the name but we always miss the familiar.  My recent visit, reported yesterday along with discussions on things like Theory-U (on which I will post next week), books, speaking engagements and family together with university teaching and funding (we both teach and both have to fund children) occupied not only the walk but the somewhat tedious public transport route back to the car.   The wait in Cocking was 20 minutes so not enough for the pub.  Then we had almost an hour between buses in Midhurst, which was fine as there was an excellent coffee shop that thankfully made no mention of the state of our boots and lower limbs.  The hour in Pulborough was the worst.  This was once a major Roman industrial and agricultural centre on Staine Street.  It was a munitions factory in the early part of the last century but now it is just another poorly serviced commuter town with little to keep a weary traveller occupied.  We did find a cafe, one minute after it closed and otherwise there was just a stack of dreary take aways clustered around the station car park.

It didn't rain but there was a lack of sun and the light was poor, so under 50 photographs record the journey.   Tomorrow and Sunday I have to complete an entry on organisational story telling for a forthcoming encyclopaedia, compete a draft article on foresight using distributed cognition and break the back on 599 unanswered emails.  So expect weekend blogs on those two subjects, and on the former subject just a little polemic.

Aspects of narrative work: I

As I indicated yesterday I have to write one, possibly two entries for Sage's forthcoming Encyclopedia ...