In 2002 I published Complex Acts of Knowing, the first major article to include Cynefin in its near current form; if we ignore the words the only difference with the current version is the lack of liminality.  it is an important article as between Figure Two and Three I move to link my original knowledge management work with complexity and in Figure Three I bring into play dynamics for the first time.  The Figure Two domain names were Known, Knowable, Complex and  Chaotic and in respect of Disorder all I said what “The fifth central space has significance, but is beyond the scope of this paper”.   Disorder has always been key to Cynefin, the fifth domain, but it wasn’t until I created the liminal version that I finally resolved f the issues with its positioning and use.  In this post I am dealing with Figure Two, the next post will be Figure Three and Four.

There has been a lot of water under the bridge since this early publication; its not the first version by the way that comes several years before but it is the first, bar a few academic conference papers. to explicitly bring complexity theory into play.  Reading it again after 17 years I’m pleased how well it stands up to the test of time and it is in the top ten cited papers in its field, so it has sustained utility in knowledge management.  I suspect the reason is the link to complexity which makes it a key transitionary article in that field.  Put more prosaically I got there first.  That article plus two re-published in the 1999-2000 Knowledge Management yearbook resulted in the IBM systems journal commissioning me to write an article on the application of Cynefin to strategy.   I pulled Cynthia Kurtz in to co-author that and the result was New Dynamics of Strategy which I think is the third most cited Cynefin article – the HBR one with Mary Boone is the most popular.  I also wrote Multi-ontology sense-making in 2005 for the Management Today Year Book which starts to distinguish different approaches to complexity in organisations.    Of late I have been going back to those articles to review their content as much of it is still relevant with a little updating.   This blog post is the first one, and focuses on the key distinction between formal and informal communities.

The basis from which I started was derived from Boisot’s I-Space which triggered me into developing Cynefin.   Boisot contrasts abstraction, codification and diffusion in a social learning cycle.   Basically as abstraction and codification increases greater diffusion is possible. I’ve contrasted taxi drivers with map users to explain this in several posts including this one.  The Knowledge Management agenda back at the tail end of the last century (it took off with the 1995 Nonaka book) was on codification.   Famously executives argued that 80% of their knowledge walked out of the office every night and they wanted it all codified on databases.  Nonaka’s notorious SECI model encouraged the idea that tacit knowledge could and should be made explicit.    A few of us said that it “aint necessarily so” but the industry driver was to codification.  The same few also pointed out that encouraging them to walk back into the building the next day might be a better strategy and a lot cheaper.  However, it is worth remembering that at this stage Knowledge Management was following Business Process Reengineering with its focus on downsizing. 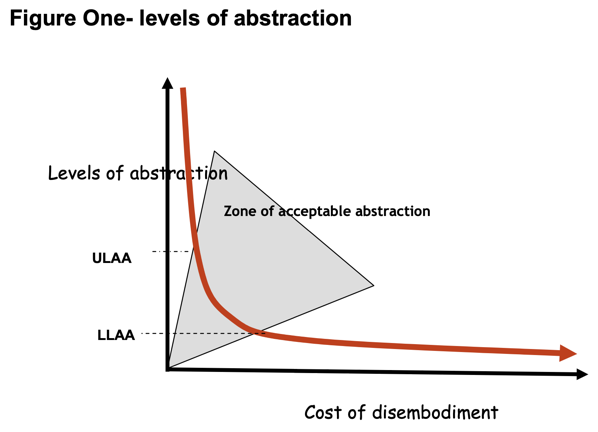 So, being pragmatic, I decided an approach to the problem was to restrict the population for whom codification was necessary.  That resulted in Figure One which also appeared in Liberating Knowledge (a basic handbook) and other publications. I took two dimensions of the I Space namely abstraction and what I called the cost of ‘disembodiment’ rather than codification; I was making a point!  So at high levels of abstraction I have a conversation with myself and as I share all the same experiences and training there is little or no cost – a few words or a diagram are enough to remind me of something I know.  At the other extreme the cost of codification becomes infinite as everyone would have to live identical lives.   Codification requires a common understanding, technical language, conventions etc.   From this I got to the idea of there being a zone of acceptable abstraction with upper and lower levels. Smaller groups with common experiences could share at a lower cost than larger groups with less in common.

So in this early version of Cynefin Abstraction became the vertical dimension.  The horizontal dimension had various labels – tacit-explicit was one, ideation v explicit cultures another and the rather odd (well that is how it seems now) use in Figure one above.  Best for the moment is to see Tacit knowledge on the left, Explicit Knowledge on the right.  So we end up with four categories:

So we can now map team size over the domains: <5, <15, <150, >150 and that helps with organisational design.  The key finding of all this work was that the informal is far more dense and prolific than the formal and its use and usefulness can not be assumed if its creation is all ad hoc.

So how do we create it, or at least stimulate it and how do we measure its presence?   That will be the subject of future posts.

The picture of lichen which forms the banner to this post is by Will Langenberg on Unsplash, it continues the theme of symbiosis

A mycorrhiza is a symbiosis between a fungus and a green plant. The plant captures ...