Narrative as abductive acts of knowing 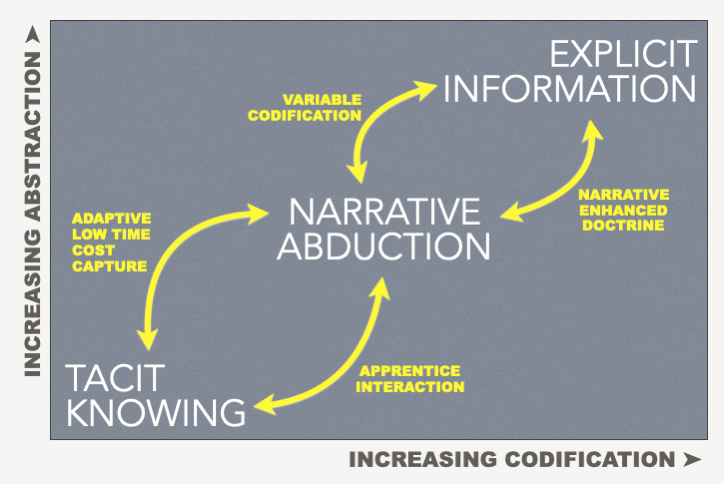 This is the second post of several that I am publishing this month to update some of my original work in knowledge management and in particular the role of narrative in as a scaffold of meaning between and within individuals, community and society.  I’ve been checking back on previous articles as I am working with Patrick Lambe to create an edited collection of my writing (articles and blogs)on knowledge management for publication.  I’ve also been finding material for the forthcoming handbook on managing in complexity and chaos which I hope will be available online next week.  It has been an interesting process and I’m pleased to say that I see no reason to decry that earlier work, but it does need updating.

An earlier version of the diagram on the left first emerged over a couple of days with ad hoc drawing on a paper table cloth in a cafe in Sitges on the coast of Catalonia south-east of Barcelona.  I was staying with Max and we were working on a paper that linked his I-Space with my Cynefin.  Given the latter was inspired by the former it remains an important paper but was turned down by the reviewers in Organisational Science as too abstract and lacking cases; a little ironic as a large part of the argument was that cases don’t serve you well under conditions of uncertainty!   I will be working on it later this month as there are a lot of unpublished joint papers between Max and others and Yasmin and I are thinking of getting them together in a book and possibly a seminar or series of events as we come up to the tenth anniversary of his death.  You will find his version of it in various papers and in particular in his book Explorations in Information Space: Knowledge, Agents and Organization, co-authored with Ian C. MacMillan and Kyeong Seok Han ( Oxford University Press 2007).  This is the first time out for the above version and some of the new wording is key and will be picked up on in future posts.

The diagram uses two dimensions of the i-Space namely abstraction and codification.  The other dimension is diffusion and the basic idea of the i-Space is that highly abstract, highly codified material diffuses to broader populations but may lose value, meaning and the capacity for innovation.  This is easier to explain by two examples at the extremes.  Top right we can use a map as an illustration. 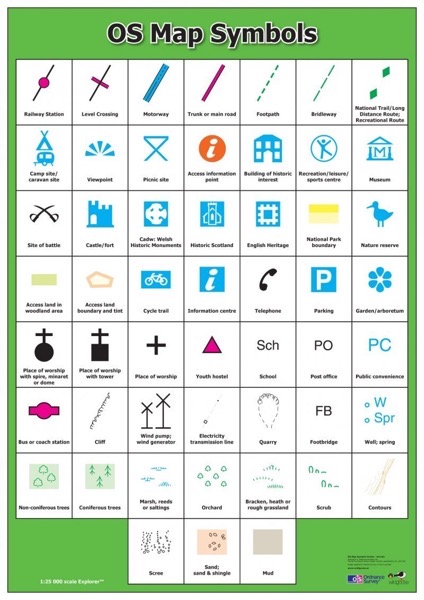 A map is highly abstract using various symbols and conventions to convey essential information about the ground you are navigating. 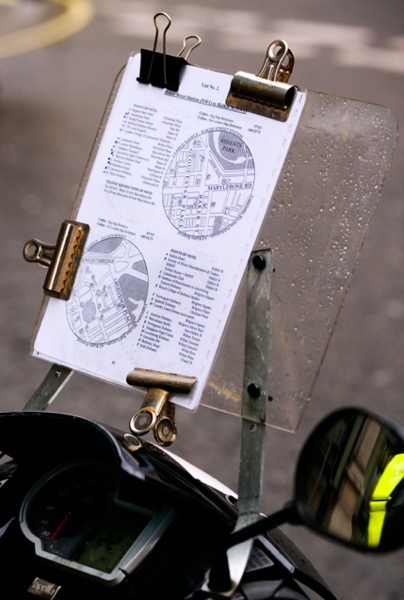 In the UK, probably the most mapped country in the world the symbols are highly developed.  As you can see from the illustration to the left there are conventions that get down to the level of if a place of worship has a tower or a spire.  As long as I understand those symbols I can find my way around more or less any territory with the aid of a compass and (if overextended) a head torch.  In contrast with that, we have the London Black Cap driver who has gained The Knowledge by driving around the streets of London with a chart strapped to the handlebars until they can describe multiple routes through London’s 25,000 plus streets from memory.  It takes years to acquire and has a low pass rate.  It was introduced as a requirement in 1865 and has stood the test of time.

The advantage of the taxi driver is that the observe-orientate-decide-act cycle of the OODA loop is intuitive and immediate and able to rapidly adapt in changed circumstances.  In contrast, the map user takes longer and is bound by the information as presented.  But the costs of using maps is significantly less that training taxi drivers.  That was a large part of the motivation behind the drive to render tacit knowledge in an explicit form which drove most of the work in knowledge management practice.  But abstraction involves a loss of context and content that can lead to errors.  A few decades ago I made the mistake of assuming that I could get back to my hotel in Tarrytown from a production at the Met faster by walking between Red Line subway the Hudson Valley line stations at 125th street in New York, late at night wearing a dinner jacket with an expensive iPad slung over my shoulder.  Thanks to a random NYPD patrol I lived to tell the story but as I pointed out to an incredulous audience in IBM’s Somers office later that week the map didn’t say Here be muggers and other strange beasts.  Interestingly their response was But everyone knows …   Building highly codified information means you have to make a lot of assumptions about third party use.  So it’s not a matter of one being better than the other, but of their both having disadvantages and advantages.

By the time I sat down with Max at the cafe table I had been using narrative in many forms for some years.  My team had identified that stories were the single best way to map decisions made in organisations and further that decisions revealed knowledge in a way that direct questions did not.  Max was intrigued and we ended up seeing narrative as a transitionary device between the two extremes.   Narrative can be understood at many levels in part because it carries ambiguity and adaptability.  If you think about the parables in the Bible or Fairy Stories (speaking from my own cultural tradition) then they are timeless in their ability to gain attention, but critically to teach.  In effect trying to make tacit knowledge explicit without going through the narrative stage is to impoverish the result and there is no co-creation between originator and subject.   So the holder of tacit knowledge finds it easiest to explain what they do by telling stories about their practice, its origins, and their understanding.  Many of those stories are anecdotal in nature, some have been told many times and have refined into a full teaching story.  As those stories are heard, retold and trigger reflection it becomes possible to identify what can and should be codified.  Experimenting in narrative is a low-cost option before you commit to the full costs of codification.  Linking explicit information to explanatory stories (easier with HTML) is what I have termed over the years narrative enhanced doctrine and taking that approach provides richer context and also reduces the time to codify.  Searching by story or by document and discovering those links provides a richer working environment than the traditional knowledge management approach of text with search engines and taxonomies.   Narrative is also a key aspect in the acquisition of tacit knowledge.  Stories inspire learning, but they also provide a form of cognitive activation and preparation for the more complex acquisition of skills, theoretical knowledge and the ability to use tools.  In the medieval apprentice system the masters were observed, the journeymen taught and the apprentices chattered and swopped experiences and ideas.  In that way the field advanced, it was not ossified through codifcation.   As shown in the opening illustration, narrative is the most effective form of transition between the two and is completely missed in the Nonaka SECI (or BA) model.

Critically narrative allows us to explore new ideas, to explore plausibilities.   Science fiction and fantasy have in various ways become a new form of prophecy.  By exploring the apparently implausible they make us aware of possible future events, or aspects of the present which may otherwise have escaped us.  Stories allow us to explore novels unencumbered by day to day reality.  Like art in general abstraction allows novel connections to be made.  We can hold narratives in common and as tropes they can pattern our responses and beliefs. They can enable action or confine us to tight patterns of intolerance.  I have called them Abductive because narrative explores plausibilities, happenchance, and serendipity and therein lies their value and their power.

A long time ago I augmented a saying from Polanyi which is key: We always know more than we can say and we will always say more than we can write down.  Managing all three types of knowledge and critically the flow and interaction between them is key to organisations and society alike.  And a final thought to leave you with: if we had retained the oral tradition in Europe then the traditional stories would not have been written down but would have continued to evolve and adapt through the process of storytelling and story listening.

Banner picture by redcharlie on Unsplash taken in the Livraria lello, Porto, Portugal Knowledge boy picture is Albany Stock – rights to use on this web site purchased

Some time ago while watching one of Iolo Williams reflections on the Welsh Landscape I ...

In praise of Texture

I love this cartoon by Shannon Wheeler, that was posted by the New Yorker. When ...