Narratives of culture: the score 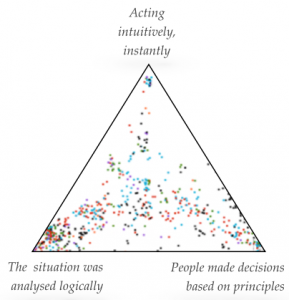 This is going to be a little out of sequence, but I want to come to how we gather narrative for the new culture scans in future posts.   Suffice it to say for the moment that this uses SenseMaker® and a non-hypothesis question that can be asked of the whole workforce or just a sample: What story would you tell your best friend if they were thinking of joining your workgroup?   The employee then interprets that story using a series of signifiers that provide quantitive data, but at any stage we can look at the stories from which the numbers are derived.   I’ll be going through the signifiers and their background in subsequent posts.

So suspend any curiosity about the how for the moment and lets look at some of the ways we can use the data to manage the evolutionary potential of the present rather than trying to engineer to some desired future state.   Now we can do this in several ways, but I want to run through two options today.

Basic, on the iPad in the standard service

The simplest is to look at the pattern revealed by the overall positioning of the narratives on one of the signifiers.   I’ve shown one in the opening picture and it illustrates the basic principle of signification in SenseMaker® namely something that it difficult to game (unlike a conventional linear scale) with three positive qualities; more on that tomorrow.   In this case we can see that the overall orientation of the organisation is towards analytical decision making, there is little in the intuitive space and some orientation towards principled decision making.

That means the organisation may have an issue if the pace of change in their sector does not allow for full analysis, or if ethics compete with numbers then there might be an issue.  These are indications of plausible futures not predictions of probable ones, an important distinction.  The HR department can then use SenseMaker® on an iPad to look at the underlying micro-narratives and ask themselves ​What can we do that would result in more stories like these, fewer like those. 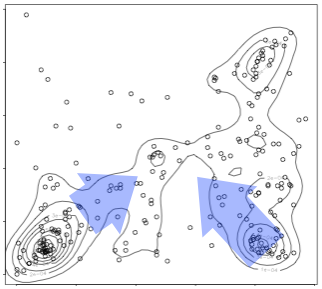 For more sophisticated programmes we start to look at landscapes such as the one shown here.  The dimensions come from the signification, but instead of a dot plot here we have a landscape, capable of handling huge volumes of data with boolean combinations of signifier values.   In this case the vertical dimension is compliance with rules and process, the horizontal getting the job done.

The general goal of the organisation is to have stories in the top right and there are some.  However there are two dominant negative ones: one is the polar opposite, the other getting the job done and ignoring the rules.  A very common position (this plot is from a live project by the way.  The leap to the top right is probably a step too far, but would be the normal focus of change programmes.  But in this case we can see a small cluster in the saddle point to which the arrows point.  If we could shift both the negative clusters in that direction then it would make a significant difference and is an easier shift.  Of course when we get there we might decide to move in a different direction.

So to make the shift we first look at the stories in the bottom right cluster and ask: What is it about our rules that are resulting in this behaviour?  Of course it may be that all of our employees are a bunch of no hopers bit that cluster probably indicates an over focus on rules that prevent customer service (I can give lots of IBM examples) where employees are finding work arounds.  We then click on the saddle point and ask What are we doing (or not doing) that makes stories like these possible?  Those two simple questions radically transform the way we change culture.

Having settled on a series of actions I would then monitor change – the great thing about this approach is that it is a continuous real time feedback, it does not require ​yet another survey.

PS: the title of “the score” is intended to make the point that even with a score there are multiple possible intepretations both for the conductor and the musicians.

One response to “Narratives of culture: the score”

There are some basic truths about culture in organisations that are pretty self-evident to anyone ...

One of the problems with cultural surveys in organiations is that they tend to be ...