Of knowing and the unknown

While yesterday's closing session at IRAHSS13 was creating on the move today's had more preparation.  On day two I have lived through day one and have a sense of the overall structure of what I want to say to bring the whole event to an end.  The overall theme was knowledge, what we know, what we can know and what we may not want to know (Slide 14 in the now combined slide set) with which I opened.  I was also reacting to some of the earlier speakers in particular one opposed to the use of unfamiliar language and the advocacy of the east v western thinking dichotomy.  nbsp;Said dichotomy  was made in a otherwise brilliant (for me the highlight of the whole event) presentation by a young Chinese academic.  It seems to be part of the new Chinese narrative, namely that they represent holistic thinking, the west atomistic.  Now I agree the distinction is key, but it is not an East-West one.  Better to think of it as a WASPs against the rest one although that is a bit extreme.  It is more of a post-Neutonian Northern Europe & Industrial USA v the rest sort of thing.

This was a packed session as I also used the complex domain model to argue for pre-scenario process as I have argued elsewhere for pre-SCRUM and pre-Strategy approach.  That model is proving very resilient.  I also (slide 19) managed the best expression of the differences between Sidecasting, forecasting and backcasting.  A quick search of the blog will get you previous posts on those subjects.

All of that was good stuff but I was really building to a new working of the whole known/unknown thing that I first used back in the 80's and have started to bring back into play of recent years.  If you read the History of Cynefin article you will see it was then two matrices.  One compared known and unknown the other with unknown and unknowable. 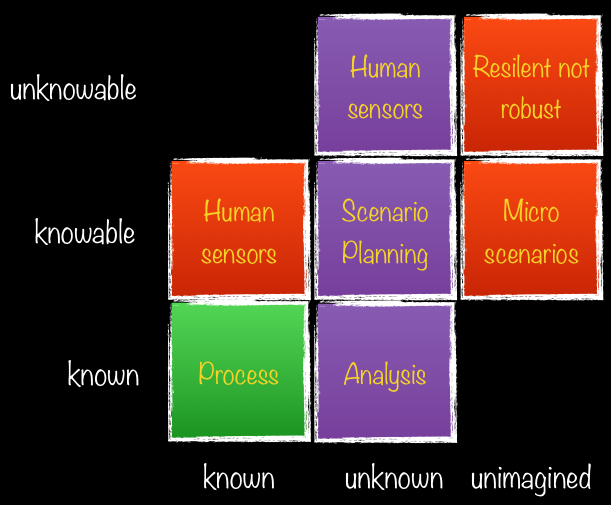 Now I have been working on this for a few months with the intention of combining the two and it came together today in time for a first outing.  Expect more changes over the next few months.

The axes are fairly self-evident but the insight was to use unimagined to make the point about strategic surprise.  There is also a mapping to Cynefin but I will come back to that in a future post.  In the Futures space the domain of the known applies to process and analysis.  The main tool for handling uncertainty is Scenario Planning and as I have previously argued this applies to the knowable unknowns, it is weak at the unknowable (think Pareto not Gaussian).  For unknowable unknowns we need the wisdom, not of the crowds but of a distributed human sensor network.   Now all of that I have talked about before but the three new areas were:

I finished with three quotes.  The first from Darwin on the value of collaboration and improvisation, which someone contradicts crude Darwinianism.  The Aristotle on virtue, something that I regard as a responsibility of education in a society that wants to be resilient.  Then finally on bureaucracy from Chapter House Dune – deal with the realities of the present, stop being idealist.

I'll pick up on more of the content over the next few months as I assimilate by notes.  Were are now three days into the Foresight week here in Singapore, for the next two days I'm in a group looking at the future of society then acting as a panel for both that event and one on complexity.  The next two blogs will pick up on those before I fly back to the UK at the weekend.

The collective noun for magpies is a tittering which is slightly less scary than their close ...

So foresight week continues in Singapore and we move on to parallel events.  One is ...