Of leopards and people

I'd like to be able to explain the lack of posts in August by a story of my taking an extended break in the European manner.   However its more a lack of time.  The month included a full week in Wilton Park looking at foresight issues which will generate a series of posts this month, but mostly it's involved catching up on a backlog of work at home and sections of my Round Wales at 60 where I am way behind on my schedule.

Last week saw travel resume with a vengeance.  I got up at 0300 on Tuesday to make a day trip to Belfast to discuss our forthcoming 360º service then frantically drove from Gatwick to Heathrow to make an evening flight to Johannesburg.  Thanks to Waze I just made it on time, via a rather circuitous route that took me through old work haunts in Sunbury-on-Thames.

The schedule here, working with Sonja, has been frantic but for the weekend we have been in the Krueger National Park.  A mixture of work and pleasure that followed on from a workshop I ran for the park authority when I was over earlier on in the year.  Sonja was one of the first people I worked with in IBM South Africa and she left Big Blue around the same time as I did.  Since she formed her own company last year we've built a good presence in South Africa around SenseMaker® and its scientific approach to the use of micro-narratives.

One of the big differences is our emphasis on empowering people to interpret their own story.   I'm going to post more on this over the next few days as I think there is a growing divide between (i) those of us working in narrative to who want to hear not only the story, but also it's meaning from the teller's perspective and (ii) those who want to interpret those stories or re-author them.  Stories (to rework Bacon) are power, and the main power is in the power of interpretation.

That difference between listening with awareness and facilitating and intervening is an important one and was reflected yesterday in the Park when I saw my first leopard.  We saw four of the big five on day one, but I had seen them before.  Leopard was my main goal, not just for the novelty but for the sheer presence of one of the most beautiful of the big cats.  We were lucky in that we spotted a buck lodged in a tree by the side of the road.   It had been placed there earlier by the Leopard and there were already cars waiting in the hope that it would return.   We hung around for the best part of an hour but had a lunch meeting with Park staff so had to leave.   Later that afternoon we returned and the buck was still there untouched.   We got a position right by the tree and sat down to wait. 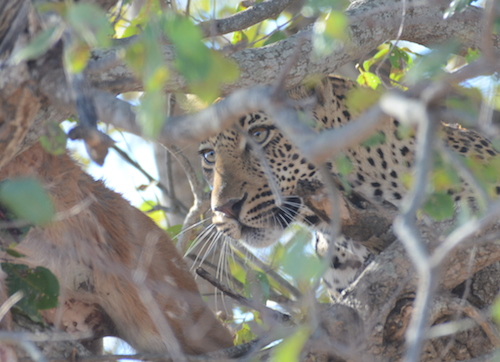 After about an hour the leopard appeared in the undergrowth but the frantic activity and noise of the cars meant it slunk back into the bush.   The human behaviour at this point demonstrated the worst excesses of our monkey ancestry.  Cars got lodged in pot holes and had to be pulled out.  Horns were blown to try and clear a path for those impatient to get past.  Shouts went backwards and forwards between safari trucks and the noise level and impatience were appalling.  By this time those of us waiting in silence were vowed not to tell anyone the next time we saw it but we need not have worried.  The leopard was hungry and impatient so appeared at speed and leapt into the beaches of the tree, secured the buck and took it to the ground and thence into the bush.  We had pole position and got some great shots, my favourite opens this blog.

Aside from the joy of seeing it, thinking and waiting I became more convinced of minimising the interventionist and interpretative aspects of too much narrative consulting (and research for that matter). That fed into work I was doing on how to use narrative in peace and reconciliation work and as I am writing a paper/proposal on that I'll share some of the material in my next post.  For the moment, just look at that leopard!

More pictures in this shared album

PS: I should also pay tribute to Sonja's husband Wessel who did all the driving and put up with two passengers who were both playing with new cameras (Nikon 600s) and a hired telephoto lens.  Photographers with new toys must be problematic!   It's a wonderful camera by the way. full FX frame so its back to my 35mm days.

My last full day in Australia before flying back to the UK tomorrow and it ...

A shared narrative of the past

I've been thinking through narrative approaches to conflict management and peace and reconciliation over the ...