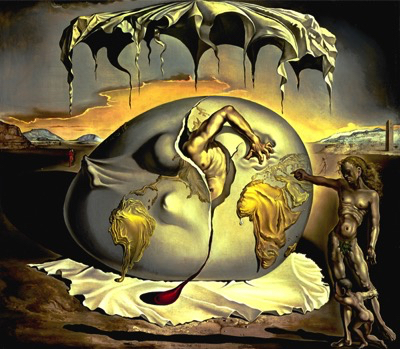 I don’t know how familiar readers are with Dali’s 1943 painting Geopoliticus Child Watching the Birth of the New Man. Dali was living in the US at the time and the symbolism is fairly obvious: the old powers of Europe point their children to the emerging new man emerging from a new world power, Africa and South America growing in importance and the parachute representing a placenta. The hope envisaged in that picture is a far cry from a world where the party of Lincoln can be represented by an obscenity masquerading as the voice of the common man. To loose reason in a time of stability would be bad enough, but in the current times it is potentially catastrophic. We are once again teetering on the brink of nuclear war, tactical in intent, not global’ but the all too imagined threat of the fifties and sixties that we thought we had put behind us is back, and with a vengeance. The project of modernity’s assumption of progress is off the rails and the very concept of rational choice is challenged in favour of validation by shared prejudice.

The use of the painting to illustrate this post came to me when I was thinking about phase shifts in the context of the norms which rule our perception of the world, or a market, or a community or for that matter our perception of our self. The moment when I was told I had type 2 diabetes triggered a phase shift in my own perception of myself and resulting in a radical change with reversal after three months formally confirmed three years later. There is a common argument, and a theme in art, that out of dramatic loss or destruction new ways of working and new hope can emerge. To be clear that is not always positive in nature. If we look at some of the extreme Gaia activists who want the human race wiped out in order to allow Mother Earth to engage in a clean start. With the latest Dan Brown film out that may become more popular as an idea and to be fair the book is his best in that there is ambiguity about who is in the right. Not a very high standard I grant you, but it is his best.

So why I am engaging in doom and dire prognostications? Well after my earlier posts I was taken up on my phrase in my last post “… the lost of a sense of meaning in society as a whole. Characterised by the anyone but the establishment reactions we are seeing world wide.” The comment/question (from my daughter as it happens) was:

… it seems as though you are equating the intent to vote for ‘anyone but the establishment’ with a loss of meaning? how are you defining meaning here? because there is a huge amount of the future/ imagination in meaning-making that builds from the past? I’m not sure i’ve understood what you’re trying to say correctly. Is it more meaning as in cohesiveness?

Now I’ve thought about this for a few days. My first reaction to opening question was to say no, but as I thought about it I came to conclusion that I did intend to match the two, but not to imply those those making the choice were not seeking meaning or purpose. That was when I started to think about phase shifts, nexus point in the fabric of human interactions where the world turns and new possibilities, good and bad open up; some imagined, some unimaginable. Thinking about it some more I realised that what I really was really talking about, but had not fully or completely articulated, was the loss of a base level of common meaning. In parallel with this I was playing around on the flight to Bosnia (itself an apposite place to visit when you are thinking about post and pre-conflict management) with the container and coupling constraint approach I am starting to develop for the Cynefin framework.

I’ll pick up on that tomorrow once I have the visualisation right ….

Today’s offering from Gaping Void is wonderfully enigmatic and could be a source for a ...

I’ve had a frustrating few weeks since my last post. An as yet uncorrected error ...