Of sandbanks and granite cliffs

It was good to see the strategy workshop picked up by Ian Thorpe in his blog and he beat me to publishing the final overview of the process (see below).  Later today I have a keynote to give where I intend to focus on narrative forms of knowing, but more on that tomorrow.   For the moment I need to complete my summary of this bottom up too down emergent approach to creating a knowledge strategy.   Importantly as should be becoming obvious it is also a shift from a linear approach of determine strategy – define needs – execute – measure approach that is far too common.   Instead this is a continuous process of mapping and strategy developed based on feedback loops and dynamic, but managed change processes.  If you want a metaphor for this then think of a map.  The granite cliffs that surround your harbour may only need to be surveyed every decade or so but the sandbanks are constantly shifting and changing.  Knowledge management is more of the latter, less of the former.  Popular approaches to taxonomy and most Communities  tend to assume too much stability; something enforced by excessive use of Sharepoint just as a decade or so ago we had over rigorous use of Lotus Notes.

So to summarise where we are.  We have a decision map which has produced two outputs (i) a series of actions or projects arising from contrasting it with the formal process map and (ii) a set of knowledge objects, things that can be managed, derived from the decision mapping using the ASHEN perspective question (it's not about categories).  That forms one part of our dependency matrix, the other being a prioritised list of things that keep decision makers awake at nights.  The matrix has then been scored by many people and from that we have a list of knowledge projects.

So not the process is fairly simply to complete and is summarised in the diagram below.  The stages are:

As that cycle continues the complicated projects will start to be bigger and take more time, but the key point is they are the result of an emergent process.  We don't make a one time bet.   The process will also encourage us to use multiple tools rather than lock ourselves into a single enterprise system.   OK where that has capability fine but not if it over constrains natural practice.

Of course some knowledge which is highly linked to the latter parts of ASHEN (experience, natural talent) will end up with apprentice and other models of learning rather than being technology or current practive focused.   And if you have used SenseMaker® for the capture you already have your first and evolving narrative database.  So the process of creating a strategy also delivers short term benefit and solves real world problems rather than creating some abstract future capability.   Sound theory is really practical when rubber hits the road, recipe book approach may look attractive but they are managing to the norm and advantage comes from the exceptions.  Clusters in the tails of distributions not the mean,

Oh, and the Go board.  Most people got the image but my point was missed.  Go is complex, chess is complicated, now think on that! 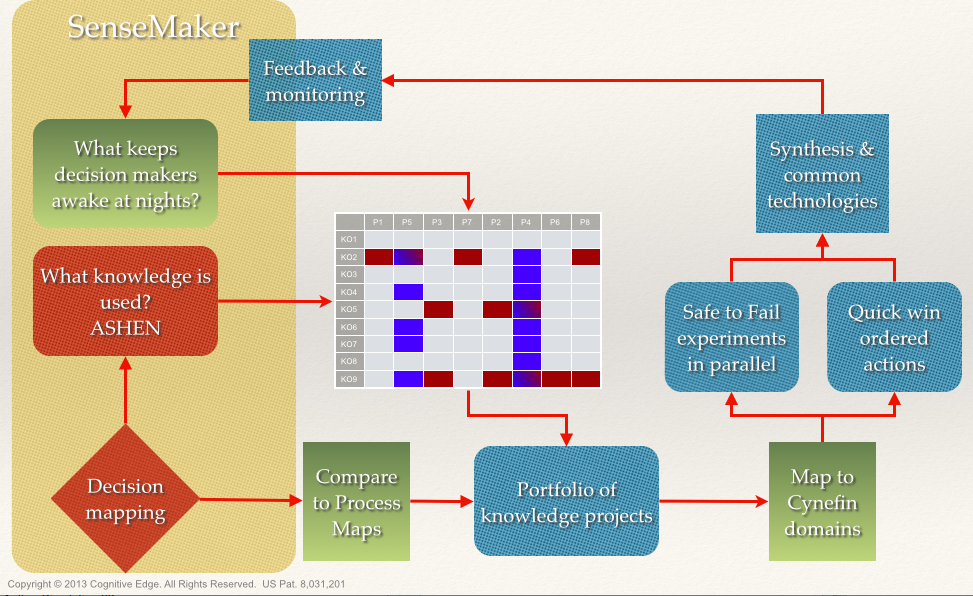 One of the key things in understanding and managing a complex adaptive system is getting the ...

A return to ritual dissent

One of the most popular methods I ever created is ritual dissent.  By happy coincidence ...