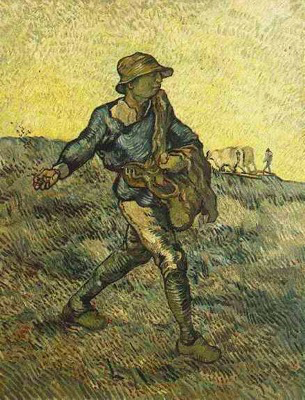 I’ve choose Van Goch’s (after Millet) 1889 painting The Sower to illustrate today’s post as I want to build on the parable of the Sower from Matthew’s Gospel which I reproduce below. I’ve long used it as parable and as metaphor to understand some of the basic principles behind the safe-to-fail approach that was the subject of yesterday’s post. Seed is cheap, soil surveys are expensive and you never know when the unexpected might happen. So cast the seed widely and see what grows, then focus your care and attention where you know it will have effect.

In modern terms that means dynamic reallocation of budgets in the context of evidence based emergent capability, a reversal of the normal approach to government investment which focuses on outcomes and the ability to fill out forms. I’ve never understood that aspect of Government by the way. We want more local entrepreneurs, we know that the nature of such people is that they are not bureaucratic form fillers so what do we ask them to do? Fill out forms …..

… there must as they say be a better way. Small entrepreneurs who stay in rural areas or impoverished areas of cities and help rebuild their local communities are what we need. Not government sponsored programmes to encourage people to leave those areas into tech startups. Creating your own country’s silicon valley just encourages your people to go to the real one not re-energise your own economy. Interestingly from various conversations this is a problem in Sydney Australia as much as in Bogota Colombia.

So to the parable and some examples of what I am talking about.

….Behold, a sower went forth to sow;
And when he sowed, some seeds fell by the way side, and the fowls came and devoured them up:

Some fell upon stony places, where they had not much earth: and forthwith they sprung up, because they had no deepness of earth:
And when the sun was up, they were scorched; and because they had no root, they withered away.
And some fell among thorns; and the thorns sprung up, and choked them:
But other fell into good ground, and brought forth fruit, some an hundredfold, some sixtyfold, some thirtyfold.

The key way in which I am using that is that we can’t know in advance what will or will not work. As a funding agency we don’t have the street smarts to work out the early stage interventions that would make a real difference, and even on the streets they may only have knowledge that is retrospectively coherent.

One of the ways we have been working this is by using SenseMaker® in both environments. With Innpulsa in Colombia we started to look at attitudes to entrepreneurial behaviour by capturing the day to day stories of frustrations in six cities. With out new partner Uniminuto we will now launch more targeted programmes using local people as ethnographers to understand the patterns of potential – in effect spreading the seed. As opportunities present themselves we will be able to rapidly deploy resource to nourish early signs of sprouting (to continue the metaphor) with small interventions. I had several conversations in Bangor last week and we plan similar initiatives in impoverished urban areas in Gwynedd and Môn. For anyone interested that programme can be made available to anyone working on urban renewal.

It is not just the cities, we found valuable material in programmes with CRS among coffee growers in Colombia and with IFAD looking at some of the implications of global warming for farmers in Vietnam. The bottom up ethnographic approach in both cases showed a strong need for more sustainable practice, using local knowledge and capabilities. The peer to peer knowledge flow that is possible with SenseMaker® is something that helps there and I plan some short term developments there to allow fragmented ideas from different continents to blend at a peer to peer level through the day to day stories of peoples concrete experience.

More on all of that in the future, but we are now looking for new partners in this novel approach to urban and rural regeneration using local savvy.

In Alan Gardner’s The Moon of Gomrath, Almanac, the last of the Children of Danu ...

I’ve been too long away from this blog for which apologies. An error of judgement ...