On the dangers of transparency 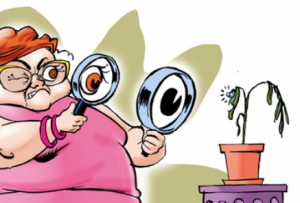 My promise of yesterday to post on the question of transparency was promoted when I came across this image in a set of archetypes I was using as a project example.   I’ve extracted the essence, namely the staring eye looking through two sets of magnifying glasses at a plant that is withering in consequence.   I’ve said for years that too much transparency is the enemy of innovation and to that I now add that it can also act as a destroyer of judgement.   I remember after I left IBM I had lunch with a former senior executive who had been more or less fired for putting a customer’s long term needs before the short term demands on the Centre.   In that case the Centre knew all the results before the General Manager concerned and were happily issuing instructions without context.

Now in earlier days, my own costs were lost in rounding errors which made it easy for me to be protected and licensed in effect to irritate.  Towards the end of my life very very senior managers wanted to keep me within IBM discovered their capacity to hide any cost had been lost.   I remember in my progress from junior to senior positions initially resulted in my having to make decisions within certain limits without secondary checks.  That meant I was happy to take a few risky decisions.   However as the process management movement gained momentum and computer based information processing more pervasive my actually authority and in consequence my freedom to experiment and make mistakes was limited.

We too often laud transparency without thinking about its consequence.  You need to know that you can be audited, you need peer or employee visibility of action but you don’t need full visibility in real time of all that you are doing.  The knowledge that you can be audited, and the proximity of peer to peer visibility should be enough.  The odd exception does not justify draconian rules.   So transparency is desirable, at the right level of granularity, but it is not a universal need.

Day three of the Cynefin and Sense-making course focuses on new forms or organisation and ...

One of the things I am enjoying at the moment is the way a lot ...