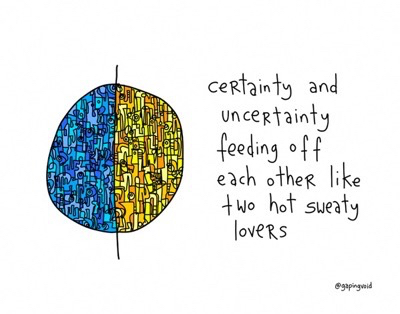 One of my favourite Cynefin related Gaping Void cartoons. A key aspect of Cynefin is that it respects the value of order in human systems, within context. Some others who take up complexity as a concept often argue that everything is complex in human systems. Those arguments range from serious academics to superficial consultants with various gradations of sense and sensibility in between. I am reviewing on of the academic books at the moment and will post on that in a couple of weeks when I get back to the UK.

Now I can understand the argument and its not difficult to find a cases which have complex aspects. As with many things the resolution lies in granularity and context. One of the examples I use of legitimate order is the use of checklists in operating theatres, a highly structured process that means it is a lot rarer for surgical instruments or swabs to be left post suture. Equally we make a decision as a society which side of the road we drive on. Now the fact that every now and then we break the rules, for example to avoid hitting a pedestrian, does not reduce the value of a fixed or governing set of constraints (to use Cynefin language). If we can achieve certainty then it is legitimate to do so.

Some people seem to need to fit whole systems into categories and of course that doesn’t work. Most systems have aspects of two or more domains and aspects are in a state of dynamic movement between domains by design or accident or some combination thereof. The goal of sense-making here is to enable us to act to use my definition. By classifying everything as complex we not only make a series of category errors, but we also miss opportunities to stabilise that which can be stabilised. That takes energy away managing the evolutionary potential of the present where things are truly complex. Boundary conditions in a complex adaptive system can be ordered and maintained as such. We can create order for limited periods of time and so on.

Humans, uniquely in nature, partly due to symbolic language, have found many ways in which we can create stabilities. Those interact with and create new realities, new possibilities. It may not always be sweaty acts of love, but it is a constant interaction between the two.

I was in Cardiff yesterday for one of those meaningless warm up matches that give ...

Respect the past, but …

I gave a longish lecture today as a part of the Public Service Commissioner’s event ...