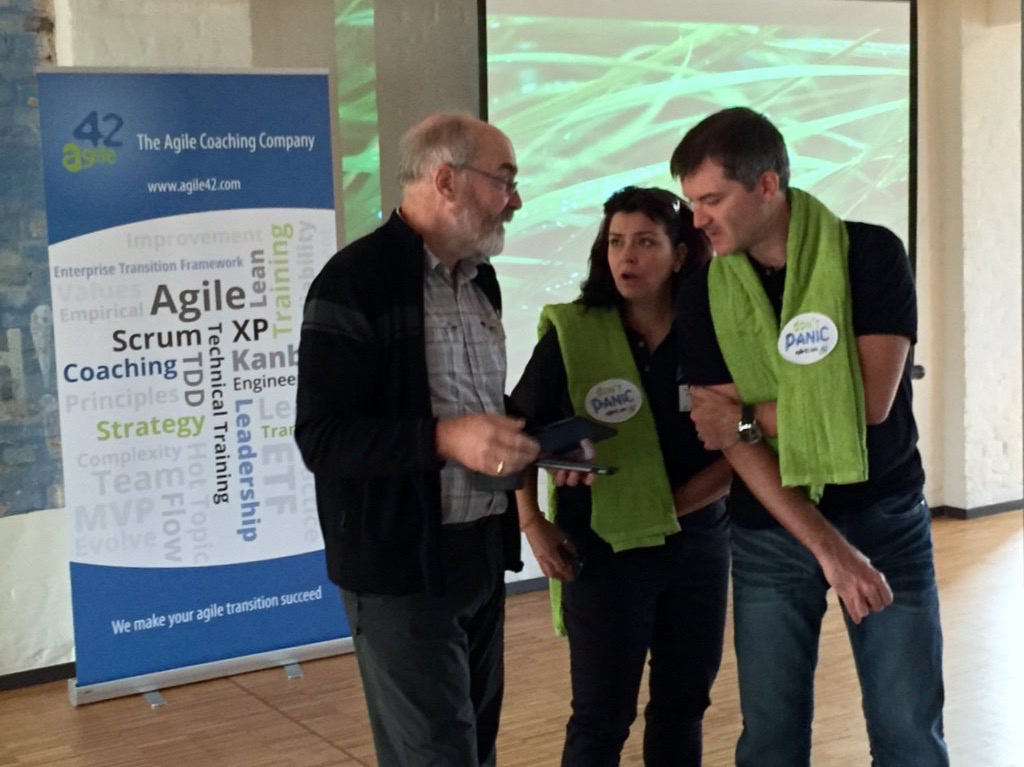 It’s been a long year and probably the sparsest period of writing for me in the last twenty years. It’s been a year of hard decisions, a few mistakes and a chance (as any period of adversity represents) to discover your true friends. It’s also a year in which I’ve understood in a tangible, and often painful, way the importance of culture; more specifically the need for coherence in culture between partners. Yesterday we announced a new investment from two good friends Marion Eickmann and Andrea Tomasini of agile42 (pictured above).

I’ve know them for seven years and in that time we have spent a lot of time talking and working together. Over the last few years that has included software development as well as a growing body of work on strategy. During that whole period the relationship has been based on trust, not legal documents; it’s a cultural thing possible between friends. In contrast, as I have learned in IBM and subsequently, other cultures seek to define, to codify to legislate before they act. I make no particular judgement here, just a recognition of differences but the two approaches lack coherence and cannot really be combined. Critically the latter is not compatible with resilience and dynamic change in an organisation like Cognitive Edge, or sufficient to meet the growing needs of Cynefin Centre members and commercial markets.

Network members have had a mailer describing some of the background to this change and also some indication of the new structure. I reproduce it below for those not on the mailing list. The existing team stays intact and we add in two of the original IBM Cynefin team Mark Anderson and Sonja Blignaut plus Martin, Marion and Andrea from agile42.

This is an important change in terms of the opportunities it provides not only for the new Cognitive Edge but also for our network. To realise that opportunity we needed investment and business focus. It’s something I recognised over a decade ago when we set the company up with myself and Steve as co-majority shareholders. He looked after the business, I looked after the ideas. For too long now I’ve had to do both and it hasn’t helped the business, or my own need to write, to think, to experiment. We’re now back to that structure and it’s also time to stay goodbye to Steve (who has stayed involved but not in a leadership role) and recognise that without his initial drive and focus we wouldn’t even have a company.

So now I can start blogging again, and writing. I’m going to start with a series on culture to link with a series of new offerings we are launching next week (some in collaboration with Gaping Void). These will build on the earlier series on Leadership; adverse context is a wonderful stimulant and I’m pleased with some of the ideas there.

This last year has been full of exciting ups, dramatic downs and frustrating in-betweens where everything seemed to be in limbo. Everyone on this mailing list has been an important part of our journey, and we wanted to give you an update on what has been happening.

The previously planned merger with CodeGenesys has not worked out. We apologise for the relative silence since, but we have to manage communications based on legal advice. We are still unable to divulge details, but to be clear CodeGenesys does not hold any license for Cognitive Edge IP, patents etc., or any rights from us to use our trademarks, brand identity or similar. We are working with them to try and resolve an amicable way forward but if you have any concerns, please get in touch with Dave directly.

While we plan to reflect on and learn from that experience, we don’t want to dwell too much on it because — as the saying goes: “when one door closes, another opens”:

We are very excited to announce that Andrea Tomasini and Marion Eickmann, known to most of you as the founders and CEOs of agile42, have decided to invest in creating a new venture, currently known as “New Cognitive Edge”, which will be an equal partnership between them and Dave Snowden.

Dave has been working with Marion and Andrea for several years now over a range of projects. This includes the shift into strategic approaches to agility in organisations as well as joint software development. A long established relationship with trust won through joint working provides a stable base for the future. With this change, Steve will leave the company.

Marion will take up the role of CEO of New Cognitive Edge, while Dave will head up R&D, and continue building the Cynefin Centre which will form a business unit of the new company. He has also promised to write the book! Zhen Goh and Mark Anderson will join Dave in the Centre. Jules will continue with Centre membership recruitment but will also move to support Marion in business development. Julia will take on Steve’s financial duties. Andrea and Dave, working with Peter, Ken and the Singapore team will be responsible for the software development side of the business. You can expect acceleration in the development of the next evolution of Powered by SenseMaker® applications and offerings. One of the first examples (which originated with work between Dave and Andrea two years ago) is the release of OrgScan which created a lot of excitement when it was demonstrated to the network recently. For those of you who haven’t seen it here is the link. In addition, a new release of SenseMaker® (v2.3) will be announced later this week. It entails the shift to AWS, compliance with recent new European security requirements and significant stability improvements.

In addition to the software and the Cynefin Centre, there will be a continued focus on training, as well as renewed vigour to re-energise our practitioner and partner networks. Here we can draw on the strength of agile42 who have built an extremely successful coaching and training business over the years. We are excited to able to build upon their capability and systems. To head up the training division of New CE, we welcome on board Martin von Weissenberg. Martin used to be a strategic agile coach at agile42 Finland and is now based in Shanghai. He has deep experience in creating and delivering effective training systems and will be working with Michael Cheveldave on refreshing and streamlining our training offerings.

Over the years, we have managed to build a diverse network that we are very proud of, but we also recognise that we have not done our best to realise its full potential. To remedy that we have created a specific unit within New CE that will focus on building and supporting this network. This unit will be headed up by Sonja Blignaut, who has been a part of this network since its inception in IBM. One of our first priorities will be to gain a better understanding of the shape and needs of the network; we plan to practice what we preach and will focus on mapping the current landscape and finding adjacent possibles. The path forward will emerge through co-creation with you. We thank you for your understanding and loyalty so far, and will deeply appreciate your continued participation.

We hope to finalise agreements and structures before the end of 2018, and plan to have our first face-to-face strategic planning meeting early in February 2019. We want to thank you for bearing with us through the ups and downs of the last year. We will try our best to keep you informed as we move forward with the New Cognitive Edge venture, and hope that you share our excitement.

The pictures here are from the first ever Cynefin Retreat in Snowdonia last year; our ...

Back in March 2018, I posted on the differences between models, frameworks, methods, manifestos and ...