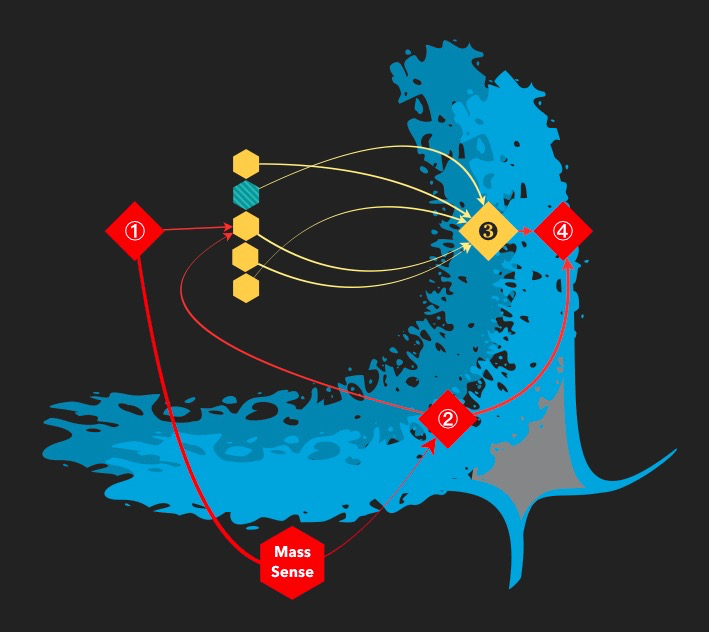 In my last couple of posts I have been talking abound boundary conditions in Cynefin. I now want to extend that a into understanding operations in the complex domain. I’m not sure about this picture and I doubt it will survive a few presentations and discussions but it is a starting point. I’ve taken the complex domain and extended the boundary state, hopefully with a degree of fuzziness or ambiguity. This is the first time I have put together different capabilities within Cognitive Edge so bear with me here.

The long established approach within Cynefin for complex issues has been to seek out all coherent hypotheses and then construct a series of parallel safe-to-fail experiments, one of each hypothesis. Those are managed as a portfolio with some basic rules: contradiction between experiments to ensure scanning, one that uses a naive asset and possibly the odd oblique experiment. In practice those experiments generally merge, mutate or fail and a solution or solutions emerge. Historically we have left it there in terms of teachable method. But I now want to move on, adding some options, including some different decision points and in effect extending the boundary conditions to both the chaotic and complicated domains.

The simplest way to determine that a situation is complex is to ask a simple question: Does the available evidence support competing hypotheses? If so then after testing for coherence safe to fail experiences take place in parallel. These are show as yellow hexagons on the picture below, with one in blue stripes to remind readers of the need for at least one of which should use a naive approach.

Now I want to add a new test here, one were there is concern that there are insufficient coherent hypotheses, or more important insufficient contradiction. If that is the case then we should be concerned that we may have insufficient range of experiments and may be at risk of missing a key weak signal, or signals. If that is the case then we now have an additional option. We create a basic infographic to describe the situation, possibly using alternative timelines, counter factual or pure fiction. The MassSense capability of SenseMaker® can then be used to get a diverse range of human sensors to interpret that infographic and to add their own narratives. From that we can draw a fitness landscape which shows the diversity of views. 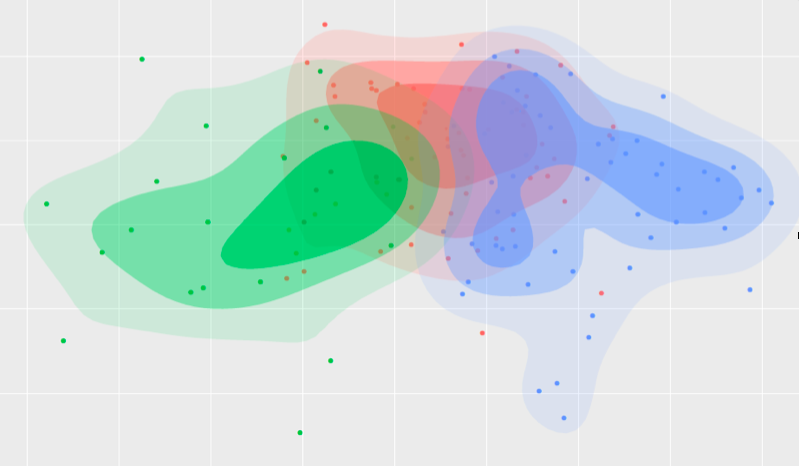 I’ve show one of these to the right and it shows three clusters or perspectives, within which there are some outlier events. If we have set up a sensor network in advance (what I have termed networks for ordinary purpose that can be activated for extraordinary need) then this can be done more or less instantly. These maps lead us into decision point two on the map. If we have lots of outliers or disparate patterns then we move into safe-to-fail, but if we have coherence we can skip that stage and move directly into the complex-complicated boundary zone.

More on this as I develop the idea, and hopefully some better illustrations. The ability to take this route does however require creating the network, ideally in advance. I’m increasingly arguing that effective management of the complex domain requires preparation of decision support capacity with no knowledge of actual use. Probably less effort than a conventional strategy approach, but different in nature.

Anyone interested in experimenting here; let me know. One of the drivers here is a (to use the jargon) a pivot we are working within Cognitive Edge on training programme. The goal is to scale that work and scaling requires codification. More on all of that in future posts.

The opening pictures by the way are from my recent walk on Carmarthen Fan, light on a mountain tarn; ambiguity and uncertainty but a degree of coherence within the text, then broadening out to a wider perspective in the banner

8 responses to “Options in uncertainty”

I’ve done the ascent and descent of the path to Llyn Bochlywd at the base ...

Now bear with me on this as I am thinking aloud ….I woke up this ...