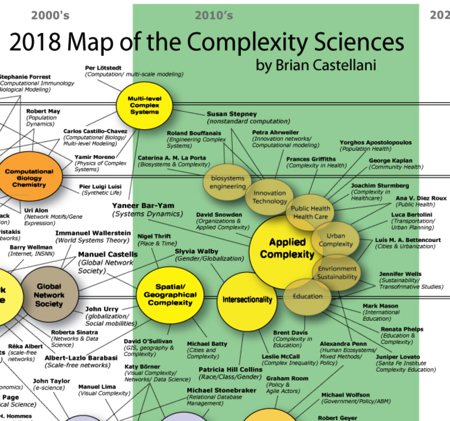 It was satisfying to find my name on Brian Castellani’s updated map of the Complexity Sciences. The map is used a lot, especially in wikipedia and it is an academic acknowledgement of the status of the work overall. I was looking it as one of the resources for the books just before I popped out for an hour’s walk from the Cottage to clear the air and start to sort out what I needed to write as a forward to a book on Cynefin shortly to be pushed in Japanese. Now I’ve already written up the origins of Cynefin, material I need to review and update sometime soon. But for my purposes today I wanted to place the framework in the context of the wider fields of application. There is also an irony here in that Cynefin partly emerged as a consequence of my concerns over one of the major outputs of Japanese management thinking, namely Nonaka’s SECI or BA model that triggered the codification heresy in knowledge management.

Now while Cynefin is known as a complexity framework it didn’t start off that way. Its original use was in knowledge management and sense-making. My Master’s thesis and wider application background was in decision support systems for international companies. In that work both of those fields were relevant. Managing knowledge of course is a lot older than the 1995 take off around SECI and Sense-making has a similar pedigree before the pioneering work of Weick for which he created the neologism sensemaking; I use it with the hyphen however. When pressed I formulated a definition of sense-making which is: How do we make sense of the world so we can act in it? I think that is more purposeful than “the ongoing retrospective development of plausible images that rationalize what people are doing” from Weick & others which is more a research perspective than one based on applied complexity to return to Castellani. For me the key issue was how much do you need to know before you make a decision and from that it was a pretty simple move to understanding that would change based on context. That produced a three by three matrix between our current knowledge state and the theoretically possible knowledge state, using known, knowable and unknowable as the aspects of each dimension. I’ll reproduce that in a future post as my understanding has mutated somewhat from the original version.

One of the formative events in the creation of Cynefin was a seminar organised by Yasmin Merali, then at Warwick University which brought Max Boisot and I together. A relationship which is probably the most important in the development of Cynefin over the years. At that workshop I took an aspect of his I-Space model that was the seed corn that ultimately developed into Cynefin. His death in 2011 was a massive lost to the field and to me personally and I regularly check back on the guest blog he wrote for Cognitive Edge. Max provided a constant set of questions and challenges: have you read this, have your thought about and the like all of which greatly enriched Amazon. Without that input I doubt Cynefin would have any rigour in its underlying theory. That interaction took me into complexity, into coherence, into catastrophe theory, into post-cartesian concepts of consciousness. What I did with that was my own and people used to sell tickets to be around when Max and I discussed things – we both came from a debating tradition and aspects of our education. Although I went to a Welsh Grammar School and Max, as godson to Prince Phillip, went to Gordonstoun.

Yasmin also helped set up a key complexity session at IBM in Bedfont Lakes which included Brian Goodwin, Jack Cohen, Peter Allen and others, along with Mike Lissack who introduced me to the work of Alicia Juarrero. A post IBM workshop brought me together with Brian Arthur, Stu Kauffman and Walter Freeman both in a workshop and one memorable dinner. It has been an interesting path, and one with many turns in which I made some good choices and some bad ones. Mike also introduced me, in Paris to Paul Thagard and Timothy Allen one of whose work I already knew, the second whose work is critical and also linked me back to Rosen. Bill McKelvey (who with myself and J C Spender provided to tributes to Max at the memorial seminar) and Pierpaolo Andriani got me into power laws and through Pierpaolo and John Odling-Smee I realised the importance of exaptation and niche-construction. That was at a memorable event on Lake Guarda with Peter Allen and others. I’m sure I’ve missed some names here, but I am assembly the acknowledgements section for the book so this is a good starting point.

Importantly throughout this process I carrying through projects, I applied the ideas not simply research them. I’ve also resisted attempts to confine me to a metaphorical library shelf. Without the interaction between theory and practice the wider integration ideas would not have been possible. Thought that my concerns over the rigid and doctrinal structures of process based approaches such as Six Sigma started to connect with equal concerns about a similar determinism in those who saw complexity science as all about models and simulation. My opposition to the latter as defining complexity resulted in starting to talk about social complexity, and when that term was taken up elsewhere, anthro-complexity as a new field of study all being it with multiple trans-disciplinary origins and debts. That made, and still makes me a few enemies in some academic circles. I’ve been enormously privileged to spend time with all of those named above and others. I’ve asked naive questions and asserted and sometimes managed to defend controversial ideas. Its been the best part of two decades since I left operational roles to start to develop this material. All of that is why I am concerned about those who simply pick up the language and repackage existing methods and material to use the new language of complexity. True understanding and discovery takes time, conflict, energy, persistence and above all curiosity, ideally ‘satiable curtiosity’with an acceptance of the attendant risks; but also the opportunities to deal with the odd ‘hairy uncle’.

So that is some reflections on the background, tomorrow a summary list of the most critical aspects of understanding Cynefin (well that is the plan anyway).

A sense of direction (4)

Taking the A5 route Anglesea late in the afternoon is normally a delight as the ...

For those not familiar with it, quiddity is not about games played by wizards (although ...