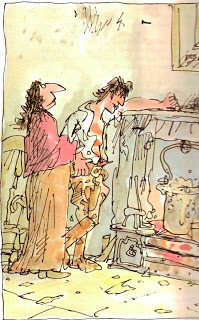 A frustrating day as I didn’t hit my writing target for last night so had to stay in to complete this morning meaning I missed the chance to get onto the hills. I also had to drive to Shipley and give forecasts of snow etc. an early afternoon departure to make it over the Pennines in daylight seemed sensible. The M62 was clear but conditions improved as we cleared the moor and coming into Bradford Radio 4 turned to Open Book hosted by Mariella Frostrup which finished with a close reading of a passage in probably the greatest book of comedy in the English Language Cold Comfort Farm. OK you could make a case for Three Men in a Boat and both satirise cultural norms of their day, but Cold Comfort hits so many targets as well as being funny of itself.

If you haven’t read it, then, do and don’t watch the BBC adaptation or the film until you have read the original, stared passages and all. I won’t ruin the plot, and no I don’t know if the goat died. But it is one of those books I read every few years and the story tape is a regular entertainment on long drives. The passage chosen I reproduce below. I don’t think this is the funniest part of the book, that honour I reserve for Flora’s reading of the responses to her request for accommodation from long lost relatives, or maybe the quivering brethren.

In the large kitchen, which occupied most of the middle of the house, a sullen fire burned, the smoke of which wavered up the blackened walls and over the deal table, darkened by age and dirt, which was roughly set for a meal. A snood full of coarse porridge hung over the fire, and standing with one arm resting upon the high mantel, looking moodily down into the heaving contents of the snood, was a tall young man whose riding-boots were splashed with mud to the thigh, and whose coarse linen shirt was open to his waist. The firelight lit up his diaphragm muscles as they heaved slowly in rough rhythm with the porridge.

He looked up as Judith entered, and gave a short, defiant laugh, but said nothing. Judith crossed slowly over until she stood by his side. She was as tall as he. They stood in silence, she staring at him, and he down into the secret crevasses of the porridge.

̒ Well, mother mine, ̓ he said at last, ̒ here I am, you see. I said I would be in time for breakfast, and I have kept my word. ̓

Judith’s breath came in long shudders. She thrust her arms deeper into her shawl. The porridge gave an ominous leering heave; it might almost have been endowed with life, so uncannily did its movements keep pace with the human passions that throbbed above it.

̒ Cur, ̓ said Judith, levelly, at last. ̒ Coward! Liar! Libertine! Who were you with last night? Moll at the mill or Violet at the vicarage? Or Ivy, perhaps, at the ironmongery? Seth – my son… ̓ Her deep, dry voice quivered, but she whipped it back, and her next words flew out at him like a lash.

̒ Do you want to break my heart? ̓

The porridge boiled over.

Now I learnt something new from the close reading, namely the phrase that titles this blog. I’m literate and well read but I have never studied literary criticism. For those similar ignorant the phrase pathetic fallacy (to quote wikipedia) is “a literary term for the attributing of human emotion and conduct to all aspects within nature.[1] It is a kind of personification that is found in poetic writing when, for example, clouds seem sullen, when leaves dance, or when rocks seem indifferent.” Apparently the meaning of fallacy at the time the term was coined meant falsity rather than a logical error.

It got me thinking about false metaphors between the organisation and the individual or anthropomorphism of objects or ideas in general. I particularly dislike the anthropomorphism of God by both the religious and anti-religious alike but that is for another day. The assumption that an organisation has a brain, body, limbs, stomach etc is very common in management literature, although they generally miss out the rude bits and the digestive system which is a pity. Senge uses it as do others. The problem is that in that sense the body is a closed system with specialised functions. An eco-system (which is closer) is less well differentiated in before maturity lacks specialisation. That gives me an idea for tomorrow. In the mean time it is Sunday, I’ve suggested a book to read; expect no great profundity, but I have got a new phrase to play with.

I’ve had a good week at Bangor University working on the initial programme for CfAC, ...

Once upon a time, a long time ago, I had a general management position and ...