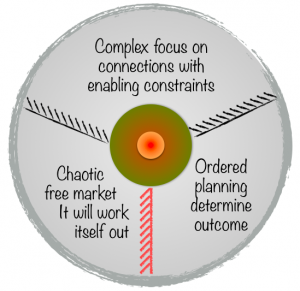 Over the years I have increasingly used a picture of Cynefin which includes three dynamic movements rather than just present the basic framework. I used to leave that for people who wanted to learn more but then found that people started to talk about four quadrants (rather than five domains) and focused on categorisation of anything thing (or anyone) who happened to be lying around into one or other. Generally they cast sinners into order while claiming the privilege of complexity for themselves. In extreme cases of derangement they assert their credentials as the wizard who manages chaos. Given that the whole point of Cynefin is to talk about dynamic changes between states and to argue that all domains have equal value this is frustrating. So putting on the basic dynamics helped to get people to realise its all about FLOW. 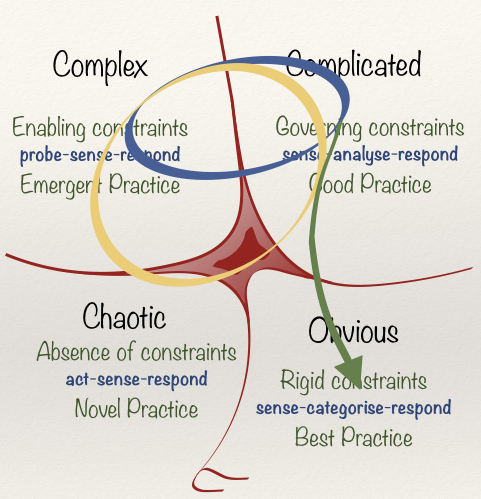 But it is not the only way of looking at the domains. The fundamental underpinning nature of systems represented by Cynefin can be shown more simply, as in the opening picture. That perspective follows on from earlier posts this week on governance. It shows the three main types of system together with some indication of the energy required to move between them. I might then go on to split order if needed, but in this case I am focused on understanding governance within complexity so divisions within order are less important.

All the various representations of Cynefin are coherent at the time of their creation but it doesn’t mean they all have to fit together like a jigsaw. The domain models also illustrate this multi-perspective approach. They stand alone to describe each domain but in a more familiar form of a three by three matrix. Sometimes they are used without reference to Cynefin if that is what is needed for sense-making. I’m going to be updating them over Christmas as they have evolved over the last few months. Yes you can see how they fit into Cynefin but they don’t have to be drawn within the original four domains. When put together disorder is top and bottom (with legitimate disorder at the bottom, inauthentic at the top. Its a different perspective, a different take on the wider issue. I’m working on getting the domain models done up as a stress ball by the way …..

The whole point of sense-making is make sense of the world so we can act in it. It’s not about restricting everything to engineering diagrams. Coherence and consistency are key, but conformity? Consign that to the flames.

Creating an architecture for change

The first work of Philosophy I read was Plato's Symposium at the tender age of ...