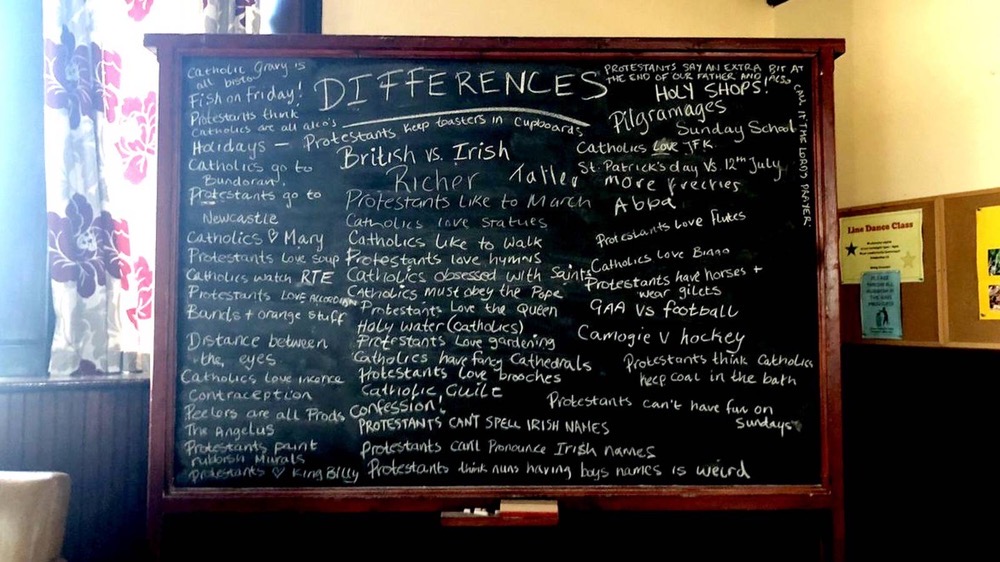 If you haven’t seen the glorious three series of Derry Girls then, if you do nothing else, watch this extract before reading further.  The Catholic girls are being forced into a peace and reconciliation process with the Protestant boys facilitated by a trendy priest and watched over by a cynical Nun (the best character in the series and headmistress of the school) and her opposite number.  Given two boards one for what we have in common, and one for differences the former has left blank, the latter is full including the iconic quote that is the title of the blog – it also has a delightful ending.  Their parents are brought in and a set of rows emerge, but the main protagonist Erin Quinn, played by Saoirse-Monica Jackson chalks “Parents” on the empty board while exchanging a smile with her protestant ‘twin’.

The series is iconic and has its own mural near the Derry City Walls.  Language matters in areas of conflict and I was brought up to talk about the Six Counties but not use Northern Ireland.  Language and which school you went to are markers of difference and still remember, back in the ’70s, being told it wasn’t safe for me to go out as I “looked like a Protestant”.  This was during the peak of The Troubles and I was working in a Catholic area.  In the episode extract above a pitched battle ensues as a result of a simple misunderstanding.  One night during the same period my mother, who was visiting, was asked by one of the Provo leaders in the area which school she went to and when he didn’t recognise the name (it was in Cardiff), directly asked if she was catholic or protestant and when she said “Neither I’m an atheist” was asked in deadly seriousness “Are you a catholic atheist or a protestant atheist?”  She had the presence of mind to reply “You know my son” and as he knew I was a Catholic he assumed she was as well.  But it was a close run thing that night.  It also offers interesting ways to resolve conflict – the great one on Wikipedia is that we use Derry for the city and Londonderry for the county and both sides enforce that from the odd troll with a sense of relief.

Now if you read the board you can sense what Hannah Arendt meant by “the banality of evil”.  All of this is trivial, but it accumulates, it gains mass and it matters.  The problem is complex and like all complex problems can not be resolved by simplistic solutions, or trying to present that underneath it all are some basic cause-and-effect relationships that can be resolved by fast feedback loops (that particular shallow path to folly has really amused me these past couple of weeks by the way but more on that in a future post).  In fact, as the episode shows, attempts to be ‘reasonable’ and’ rational’ may make things worst.  Back in December 2020 I wrote a three-part series inspired by Guattari and Deleuze’s idea of ligne de fuite which is relevant here, so I won’t repeat myself.

Now to be clear, and I know some people won’t like this, you don’t resolve significant conflicts by getting all the protagonists in a room facilitated by someone with a neo-colonial, white liberal ideological stance trying to assimilate people into their idea of what is good.  You will always get a temporary effect and reported outcomes that will secure further funding and your workshop might, on occasion act as a catalyst for some more substantial change – indeed the fact that you are able to hold the workshop may be an indicator that change is now starting to emerge.  But, and this is the main point of my post – and those two smiles at the end of the scene referenced, where you start to realise that you have something in common with your ‘enemy’.

Back in the 70s, I was a very junior member of a different type of peace initiative in which we took mixed groups of three or five (the asymmetry was important) from both sides of the ironically named ‘Peace Walls’ and dumped them into the shanty towns of Latin America to work together.  They pretty soon discovered they had more in common than they realised and, critically, they had a conversation about their differences at a time and place of their own choosing and in their own language without any external facilitation.   Another example of this is the film The Journey which is a largely factual account of how Ian Paisley and Martin McGuinness, leaders of the two communities, found a way to understand each other at a personal level by having to live through adversity together again without facilitation – although the overall theme of the film is that the situation was set up to try and make that happen.  Another example:  I’ve always loved since I was a teenager is Giovanni Guareschi’s stories of Don Camillo and Peppone, the former the Catholic Priest of a sleeping village on the River Po, and the latter the Communist Mayor. A delight, if only for the way the priest is told off by the Crucified Christ in his prayers.  The two are in a constant state of warfare but in their hearts, they both care for their people.  That is powerfully shown in one story where they both end up repainting the crib figures in the build-up to Christmas.

I would summarise all of this as follows:

The heart of any solution to conflict lies in creating the conditions for empathy between the antagonists at a micro level through action, where talking arises from mutual action and respect not mediation.

There are connections to my last post on granularity by the way – small groups working in parallel, not large groups talking about things and critically talking within their own context without a third party with an agenda, however well-meaning, being present.

So a long intro, but we have been working on an approach for this which can scale and works as well for conflict in merger and acquisition at a company level as it does for political conflict.   I’m going to summarise the approach briefly here, but happy to spend more time, and go into more detail, with anyone interested the plan is to build capability here with George Mason University and others (again get in touch if interested).

Critically, here governments and agencies create the conditions by which solutions emerge – we can provide a pack for City Mayors for example – rather than deciding what the solution will be.  This also links to our wider programmes including citizen engagement.

Mural of the Derry Girls from the popular TV comedy of the same name in the city centre shopping district near the Derry City Walls by K. Mitch Hodge on Unsplash

The blackboard picture is from a tweet, tracked down after it was used in an Irish Times article.