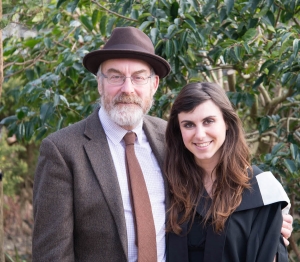 Late this morning I sat in The Dome Brighton to hear the words Anthropology of Development and Social Transformation, degree of Master of Arts and winner of the Bill and Scarlett Epstein Prize for the Best MA Dissertation in Anthropology, Eleanor Mary Snowden. Two years of part time study coupled with working in the call centre of American Express to pay some of the bills and she made it.   There was a total panic moment when she reread her thesis a week before the results.  She knew it had to be good to get her a distinction which would be important for her to go onto a PhD and she had convinced herself it was 2:2 level at best.  It has been a fun two years for me as well, reading essays and starting to be told that there are papers and books I need to read.  Tables turned and all that.  She also did a good job on a SenseMaker® project (although not working for me, so thanks Ana, Meg and Tony) and cast an anthropologists eye over what we are doing.  So that is both children with Master’s complete, one moving on to an Audit qualification with KPMG and the other planning a world tour before starting to sort out her doctorate at the end of the year.  I wore a black fedora for the undergraduate degree, this time (and 35kg less) I went for the brown one.

Ceremonies are always interesting and having a Chancellor like Sanjeev Bhaskar is a bonus.  Originally rejected by Sussex when he applied to them as first choice his position is rather ironic.  He struck the right balance between seriousness and comic relief and he also put heart and sole into each individual who came up to that stage.   He accepted selfies, matched dance with dance, sat one or two in his ornate chair and took pictures; all in all a very human performance.  The Vice Chancellor only got out of his chair to shake the hands of those awarded a PhD which seemed a little elitist.   We also had the benefit of an honorary award to John Simpson who started by asking (to the discomfort of some on the platform) if there was still a revolutionary spirit on campus.  Sussex may not live up to the standards of the 70s in this respect but they have had their share of passion in the last couple of years.

I’m staying down in Brighton until the weekend, a long walk planned tomorrow and then my wife’s birthday meal in the evening and a family gathering on the weekend.  Also the odd meeting or two and lots of skype calls.  So tomorrow if will probably be a walk post, then on to design thinking (as a problem and opportunity) on the weekend.

Some thinking about decisions

I'm still working through possible material for next weeks training programme in Zurich.  One thing I ...

Of a journey or two

Given a weekend in Brighton anything involving mountains is not really possible but the Downs ...