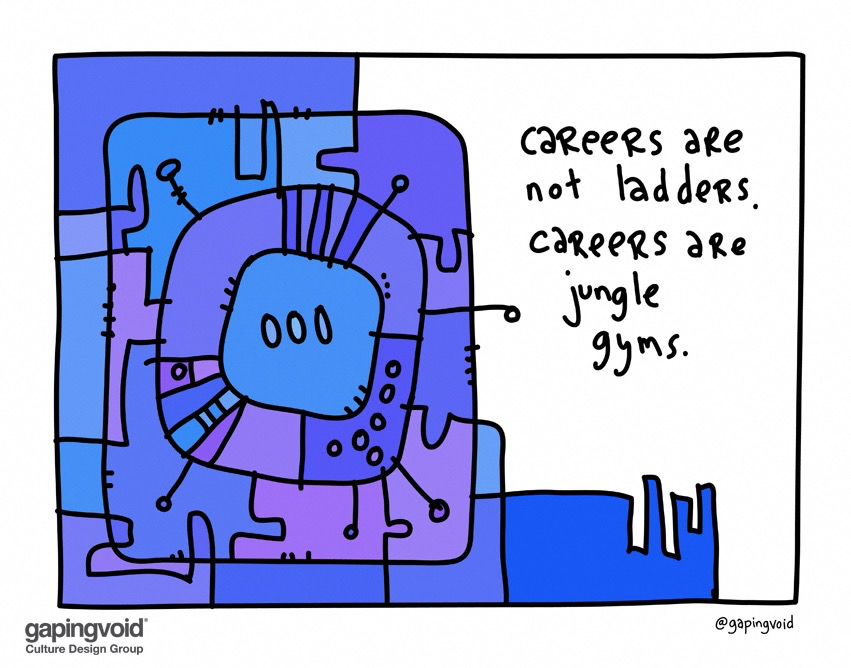 In reality very few aspects of human life have the tidy linear progression of a ladder, although the snakes on the board are both slippery and pretty direct. At times in my own life it has felt more like a random walk through the jungle rather than anything as purposeful as a gym. Yes at various stages there were plans and periods of linearity but often it was a matter of seizing an opportunity or simply doing what seemed right at the time. I remember when I joined IBM being advised that I had two choices. Firstly I could learn to play the political game, but I had not been born into IBM so that might be difficult, or I could do what I thought was right and rely on top cover from those who valued what I was doing. I chose the latter, but I had won the right over the years in consultancy, programming, business management and strategy. The originality valued by those who provided the top cover had been hard won. There were also several occasions where I came close to loosing my job, some closer than I thought when I look backwards, and that involved risk. But overall I think you do what you think is right, seize every opportunity for learning and knowledge acquisition and try and respect the integrity of other people involved in the process. I doubt anyone can manage that all of the time and I know I failed several times including a few events and interactions that can still trigger a sense of guilt and shame (and no I am not sharing them). But overall one needs a sense of direction, but not a specific goal if you want to remain adaptable to context. Goals should always be short or medium term in nature.

Of course that supports the wider teaching of complexity theory. One of the books I found useful when I was starting to formalise by thinking on the subject talked about agents having strategies and the interaction of those strategies resulting in emergent properties of the system that did not reflect as such the individual components. Now with a more developed theory of anthro-complexity, and a lot more reading, I can see aspects of agency in narrative as well as in identity patterns rather than individual agents per se, humans are not ants was a phrase I used a lot a few years ago when I was distinguishing human from other forms of complexity. I think one of the reasons many people working in the application of complexity sciences (including myself) find Daoism interesting is that it talks about living in harmony with the Dao, or way and focus on simple natural and spontaneous ‘effortless’ actions that accord with the three treasures of compassion, frugality and humility. Now I am a Catholic of sorts, not a Daoist, but this seems to correspond with much of the mendicant tradition within Catholicism. I make no claim to achieve all three, but neither do I confuse humility with acquisence in any view (a common mistake). Guiding principles on pathways are not goals of course, and compliance is not the same as coherence; it allows for contextual adaptation.

In my keynote on Friday at Agile Maine I opened by suggesting that there was ...

I should probably have watched out for today’s Gaping Void cartoon before mentioning humility in ...