I more or less fell into bed asleep last night after a meal, but woke up in the early hours and slept fitfully thereafter.  When the alarm sounded I was tempted simply to ignore it.  However if I was to walk, after an enforced absence following the landslip incident then it was now or never.  If I failed to get the 0915 ferry there were few risk free alternatives later.  I had been advised the day before not to wear the barefoot vibrams (one of which is pictured below) as the path was rugged and the ricks were sharp.  However my last walk here had convinced me that Kiwis are over cautious when it comes to tramping and I really didn't want to mess up the light weight walking shoes that were all I had for the flight.

I got to the ferry in good time but discovered that the landing was to be at Islington rather than Rangitoto Wharf due to sea conditions.  That rather buggered up my plan which was to head west and north for Mckenzie bay then climb to the crater rim (Rangitoto resulted from a volcano that erupted some 600 years ago) and return for the 1415 ferry.  There was not much I could do about it however, and the day was bright, windy and showery so all together I was happy enough.  A consultation of the map showed that I could climb to the crater then either make an extended trip to McKenzie adding some two and a half hours to the walk.  Otherwise I could cut down to Rangitoto Wharf from the top and head back if the distance seemed too long. I left it open for the moment after we landed and headed for the rim.  The problem with that ferry was that everyone else was heading in the same direction so it was rather like a ramblers outing.

The view on the way to the rim as I reached the top was spectacular as the panorama shot below shows.  I should say at this time that my Nikon 7000 is in for repair, so I was using the iPhone and the Coolpic.

The top reached I had to make a decision.  The trip to the top had been a lot faster than the map said, but to do the full round to Mckenzie would have meant I would have to exceed the map times for a longer distance than planned and my knee was not fully recovered.  Discretion took the better part of valour and I headed down the easy path to the Wharf and arrived in time.  I then faced the second choice of the day, either to take the direct path and possibly make the 1415, or take the more interesting looking coastal path and make the 1545 with ease.  I chose the later as can bee seen from the GTX trace on the map. 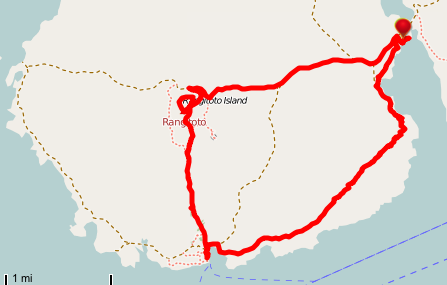 Now this path was at the start a delight.  The opening shot for this post gives you some idea of the delights.  I strode along and started to entertain thoughts of making the 1415.  THe distance of the road and coastal routes looked to be be the same and so far I could see no justice for the double time estimate on the way marks.   I had some difficulty half an hour in when I got mobbed by black back gulls protected their nesting sites but I managed to protect myself and avoid bites and five minutes later I was away. 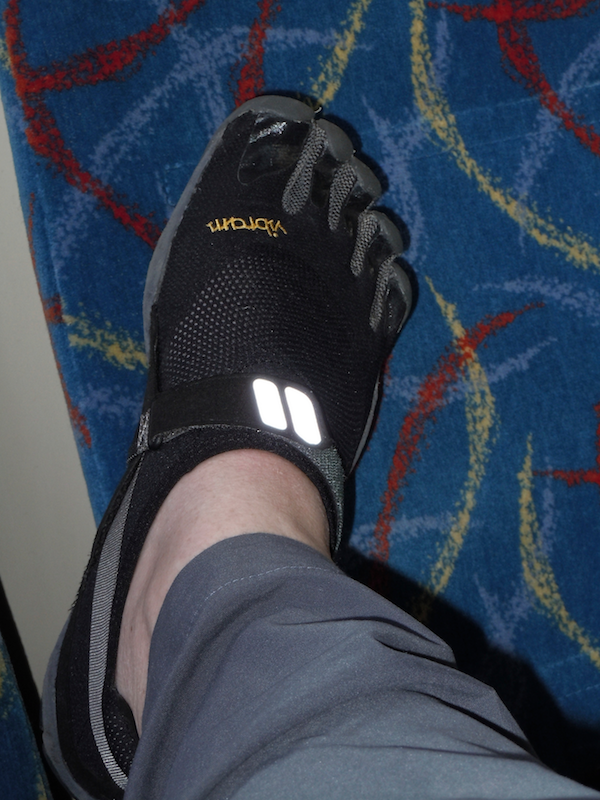 Then the path headed inland and narrowed.  It went from a smooth walking surface to one that ascended and descending what seemed endless lava flows.  Every step had to be taken with care – especially as I had no trekking poles.  With full walking boots, ideally with a steel shank I could have made good pace.  As it was I had to pick my way with care.  As the path became more difficult, and more beautiful, I had to pick it with extreme car which put pressure on the knee.  The net result was that I got the ferry on time, but with an inflamed knee and back pains.  But it was worth it.

The bare foot shoes stood up to it – as can be witnessed from the picture of my resting the knee on the ferry back.  Neurofen and a beer (in reverse order) handled that and I had time to shower, pack and fit in one more meeting before heading for the airport and the start of a flight where I land when I leave.  More on that tomorrow.

I will however return.  The original loop I planned is still to be done and Motutapu looks like an outstanding coastal walk without the volcanic rock.  It is separated from Rangitoto by a cause way so with planning it should be easy.  The name Rangitoto is interesting by the way.  Its literal meaning is bloody sky which would lead you to think it was a reference to origins in fire.  However it is derived from the phrase Te Ranig i totongia a Tamatekapua whih translates as the day the blood of Tamatekapua was shed a reference to a battle on the island.  I blame Peter and Julia for the fact I know pay attention to names!

Today saw the first course I have run specifically on the subject of resilience.  It ...

Travel voodoo & the healing power of a bath

It was a long day and night getting to Calgary from Auckland, not helped by ...