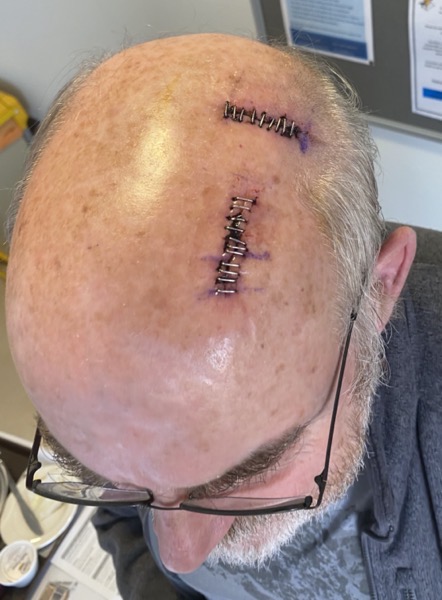 I can’t say that 2019 has been the best of years.  It started well with a sentimental weekend in Pembrokeshire with the family going round old haunts following an indulgent four days in Snowdonia which included Cnicht and Moelwyn Bach, then the Carneddau circuit, Snowden via the Rhyd Ddu Path meeting up with Welsh Euan in the evening and finally Elidir Mawr and Y Garn with Scottish Iwan.  Wales also won the Grand Slam.  I had further plans to celebrate my 65th Birthday year with for a trekking holiday in Georgia, attending Burning Man with daughter, cycling the length of Britain and getting past all  the summer ferries on the South West Coastal Path in order to be able to finish the long distance walk over winter.   None of those events happened.  Firstly the contacts we had for Burning Man didn’t work out, the Georgia trek was cancelled as only three people booked.  Then to cap it all on the 17th June I tore a calf muscle on the route east from the Lizard (day three of four) and limped painfully on for 8 miles before being forced to abandon the route.  This was especially galling as day four had been carefully calculated to match tides at two crossings,  Recovery took a long time and it was the 1st September before I could ride the bike again so the length of Britain ride had to be cancelled at considerable cost.   To make it worse I then tore the muscle again on the 13th September.  I was about to go walking with friends and agreed to shift some fertiliser to the back of the garden (up hill and ackward) and slipped.  This time I know what to do so was with the physio two hours later but didn’t get to ride again until the 20th October.

So all those plans failed but then it got worst.  We were aready caught up in completely unnecessary  legal case.  I still cannot comment on the case. beyond saying  that the parties came to a mutually agreeable settlement.  A few days later, however,  we were forced to file a  new lawsuit to enforce the settlement!  Our allegations in that suit are publicly available.  More to come.   In parallel with that an infection produced a prostrate cancer  scare and only after several blood and tests over six months was I finally cleared which added to the stress levels.

Not to mention that February saw me getting deported from Saudi Arabia  in what (I am now speaking British) was an educational experience.

The point I realised I had an issue was on the morning of the 24th of November.  That morning brain and hands would not connect to allow me to type.  I’d just got back from an extended trip to the US and  gone through a  busy couple of days with an opera on the 22d and a rugby match on the 23rd so I thought I was just tired.  I drove to North Wales via Bristol to manage a retreat and survived but was increasingly run down and the typing would not return.   It took me three hours to get an MoU in place, something that would have normally taken twenty minutes.  On the 28th I drove to Reading to give a three days masterclass and by now I would hardly write on the flip chart and was starting to slur words and loose my balance.   Something was evidently wrong so I phoned the Doctor on the 2nd and got a next day appointment; which was worrying: normally you wait a week so so.   The Doctor suspected a stroke and if I had phoned on the 24th I would have been straight into hospital.   He said the thought there was something odd about it which was prophetic.  But I was booked into hospital on the 5th and things moved at pace.  I had an ECG, several different scans including a critical CT one.   At the end of all that the Consultant said he thought I had experienced a stroke, prescribed aspirin etc and sent me home.  Fortunately I didn’t take any pills, planning to start the next day.  I was pretty depressed to be honest so daughter and I headed for the pub to eat  and to drown my sorrows. An hour after we got home the hospital phoned with orders to come in immediately.   The Radcliffe Hospital in Oxford is the specialty neurological hospital for the region, they had looked at the CT Scan and found that the left hemisphere of my brain was compressed to 65% by a brain bleed.

After that everything is a blur.  On arrival in Swindon I was under medical supervision until an ambulance could get me to Oxford.   I caused some stir on arrive as I walked onto the ward when (based on the CT Scan) they expected be to on my back.  Multiple tests on the 6th and I was scheduled for trepanning later that day.  They have a fancier name  for what is a 8,500 year old operation but what it means is having two burr holes being drilled in your skull, the dried blood flushed out and then you get the staples (see picture).  An Air Ambulance came in that afternoon with a more serious cases so I had to wait (without food still) for the following morning which worked out well.  That was a fair amount of fun chatting with the staff.  The Radcliffe has a young very bright staff and I had already given a few informal lectures on anthro-complexity  as they wanted to know what it was about,  That includied the anaesthetist who had also worked in Mongolia which we talked about the context of some SenseMaker® work.  The surgeon eventually asked her to put me under as we were talking too much!   She also told me I could have had the operation under local anaesthetic which  I would have loved but it was too late.

I woke up to discover I could suddenly think clearly again.  There had been two bleeds – an old one which I had lived through and the new one.  In effect  I had been progressively deteriorating for a couple of months, the loss of cognitive capacity had gradually crept up on me.   I had told I was hyper and looked five years younger and it is certainly how I felt.  A near instant recovery of facilities meant the problem is so much better than a stroke, although the downside is that, because I had surgery it may be longer before I can drive again.   Monday I was discharged and I have been resting since – I have watched a lot of television including all five series of Poldark which shows how bad things can get.   There are still oddities as my brain expands back to its original space but nothing that won’t fix itself by the end of the six weeks recovery period.  So I was lucky!

Release of the Evil Spirits

Trepanning is  the oldest surgical procedure in human history.  It was done originally with bone drills to remove evil spirits and also to create a third eye for Sharman.  It feels a but like that to me now.  The whole experience was humbling.  The hospital staff in Swindon and Oxford could not be faulted (although they did seem disappointed that the operation was very common), and, for my American friends, it cost me nothing and there was no rationing.  My family rallied round and were always there for me – and still are as I can’t drive. Cognitive Edge staff took over duties and their performance was above and beyond that I could have expected,   But above all else the response on social media and email was simply overwhelming.  I don’t have the words to express my thanks for the sentiment and volume of concern around the world.   To know that I am part of a movement (because it is not just me) was humbling and is contributing greatly to my recovery.  I am literally lost for words, but thank you all.

I’ll be back in action from the latter part of January and my first engagement will be in Malmo.

In 2002 I published Complex Acts of Knowing, the first major article to include Cynefin in ...

I finally decided on the theme for my traditional (well I’ve done it more than ...