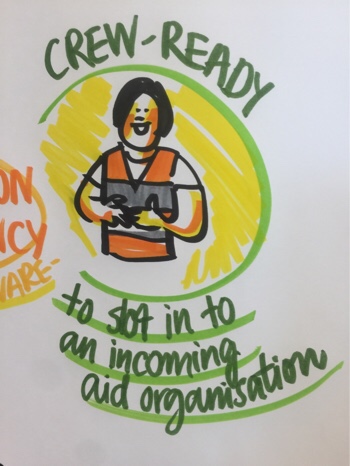 In yesterday’s post I illustrated the difference between a resilient and a robust system by contrasting a salt marsh with a sea wall. The Sea Wall is highly efficient, it creates a clear boundary but when it breaks the result is catastrophic. It can only survive as it is. I can add sluice gates that allow partial release of pressure (with consequences) but ultimately the structure is ordered, firm and survives by being what it is. The salt marsh on the other hand is constantly mutating and changing. Different tides change its nature with complex eco-systems developing in the constantly shifting margins. Critically even when it is saturated it doesn’t release the contained water it continued to hold it. We always know that it is a salt marsh, but its nature and boundaries change.

Some time ago (memory fades) I defined a resilient system as one that survives with continuity of identity over time. More recently I had amended that to one that survives with coherence of identity of time but I’m happy with either. There are underpinning concepts there which also require unpicking but like all good definitions (or frameworks for that matter) the definition can be understood of itself, but closer examination reveals deeper meaning. Taleb’s use of anti-fragile to describe a system that thrives due to failure to be a type of resilient system. I think he is wrong to make a claim that he has discovered something beyond robustness and resilience. The examples he gives have long been described in the literature within the wider category of resilience and to my mind a further division is not helpful. Part of my problem with Taleb (whose work I find very useful) aside from an ego that rejects criticism (or interprets any question as criticism) is that he seems caught up in the publisher driven need to claim something unique for each book rather than contributing to the field as a whole. I have a draft post on a recent set of exchanges with the great man with the title of “The fragility of reacting” that I will get out in the next few weeks but for the moment I want to make the point that surviving through failure is not unique even within resilience so if you are translating from one set of ideas to the other then you need to be aware of this.

The key distinction for me is in the above description – if a failure of the constraint (and yes this is all about constraints) results in a catastrophe then the constraint (and the system which emerges from it) is robust and in general engineered to some specification or is the highly stable long term outcome of a process (granite rocks for example). Any system that can survive failure without catastrophe is resilient and in general organic. Nature tends to resilience and redundancy, to effectiveness at the cost of efficiency. The issue for us in human systems, in our interactions with the social and ecological systems with which we interact is that we are capable of design. How we do that design is the subject of the coming Tasmania Retreat. As a reminder if you have been on any of the basic Cynefin training programmes then we have a special deal for you to include Train the Trainer for this retreat only.

One of the things I have been doing over the last year is to reflect on the way I, and others who I work with, have developed methods for complex issues and problems over the years. That approach links to the core statement and lesson of the Childrens’ Party Story namely that we manage the emergence of beneficial coherence within attractors, within boundaries, we only manage what we can manage, namely the nature and existence of the various constraints, the probes (designed to catalyse attractors) and the allocation and reallocation of resource to said constraints and attractors. What follows from that is the ability to map what constraints exist, or should exist (For the Snowdonia retreat the lack of social and ecological constraints on economics will be a theme). So we don’t design the outcome (per back-casting and the like) instead we manage in the here and now with fast feedback loops. To do this we need various ways to describe what we can manage and the range of options available. Constraint mapping is a key technique here (taught on Train the Trainer but not on Foundations), but we also need to identify key concepts such as scaffolding, a vital output of the Whistler retreat. Indeed, a typology of scaffolding types is now a work in progress and will hopefully be completed this year. Scaffolding is a key part of any design process as it creates what should be a temporary structure to allow something more resilient to emerge. I’ll post on that later. But we also have to understand on a much wider basis just what we to play with in terms of change, the cadance of the feedback loops to understand the emergence properties of change and our ability to correct and recover.

I’ll make a firm statement now that I don’t expect to change but I am willing to. A robust system can be designed in terms of end goals, a resilient system has to be designed in terms of what we don’t want to happen (a negative motivation but a strong one) and a direction of travel that minimises the risk of catastrophic failure, but is designed to induce early failure from which we can learn. With exaptive processes such failure can also be designed for innovation,

So in the Tasmania retreat, not only will we look at designing for resilience, but we will also examine the very process of design itself. A real change to get in on the ground floor. By way of a taster my in-text illustration indicates one of the most resilient forms of human organisation; a crew is robust, most teams are fragile. Ironically a crew arises from hard constraint …..

The opening picture is from a post retreat walk in the Whistler area. I forgot to charge the battery on the Nikon 810 so its only an iPhone picture – and I’m really fed up as the lighting conditions were ideal for 37mp! A part of the retreats, and the reason we use the mountain and sea locations, is the opportunity for these type of experiences and the aesthetics of invention.

Our first retreat of 2018 explored the general area of design and innovation. It took ...

In architecture a spandrel is the space between an arch and the vertical wall. It ...