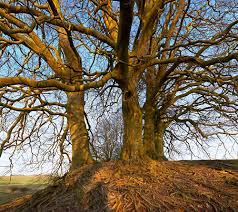 10: Trying to get to a single causal line of reasoning

The picture is from Avebury just around the corner from where I live.  Known locally as the Tolkein Tree it is a distinctive landmark on the walk around Avebury circle.  My own children spent many a happy hour playing amidst the exposed root systems and the trees also have their share of New Age visitations.  The three trees are not the Tolkein Tree, that honour probably belongs to the black pine  felled in Oxford last year.  My reason for starting with this picture is the root system itself.  It is intertwined, it has emerged over decades and it is intimately linked into the surrounding eco system. If one the trees were to fall down, that catastrophe should not be attributed to a single cause or causal pathway.

Not this simple truth is problematic for too much research and management practice which seeks more simplistic explanations than the simple truth provides.  If we take a closed manufacturing system then techniques like root cause analysis can be highly effective.  The problem comes where human motivation comes into play and/or the various interdependencies between elements of the system increase.  That gives us a real issue in things like software testing and medical research where attitude is a part of the issue.

Lets take one example close to my heart.   A critical part of my motivation in dealing with diabetes was the Newcastle research which showed that reversal was possible.  Having identified that people with stomach stapling operations reversed Type II Diabetes they replicated the phenomena with 750 calorie a day diets.  For those who stick with it (significant) they achieved reversal.   They have now secured funding for a longer term research programme in which large numbers of people will go through the same process over a longer period of time.  They will also do more work to see exactly what starvation does to the pancreas.   Limited sample and limited time were both valid criticisms of any attempt to claim a universal truth. So having got some evidence their next programme seeks to replicate that over longer periods with better and more extensive sampling.

When I contacted them with the intent of replicating the work I was told that the 750 calories was not necessary but they thought that dropping 1000 calories a day would have the same effect.   At the same time I was having various other conversations with people who were convinced that exercise was also a major factor.  It didn’t take me long to work out that exercise consumed calories and combining that with near starvation might be a good idea.   To achieve that I hired a dietician and also (critically) a physiotherapist.   The latter was important as I had already started to take exercise but found uphill and downhill sections difficult.  I was obese and consequently exercise was difficult.   Working with the physiotherapist, the constant feedback look from the dietician all made things a lot easier.  Keeping to the diet was not punishment as generally I was eating well every day.  Others on the original trial had to make do with specialist shakes and the like.  The motivation as I could walk longer, harder and higher was key to my overall success.  Also I knew enough about ritual and cognitive activation to know that creating rituals was the best way of changing patterns of behaviour that would be sustainable over time.   So I worked on those as well, and then developed a set of heuristics to make my day-to-day decision making easier.  More details via the diabetes category on this blog but the point is that I took an informed multi-disciplinary approach.   I didn’t reject medical advise (a few people have tried to suborn my experience to their own ideology) but I used it with other evidence based material.

Now I am not intending to argue from the individual to the particular, but I am arguing for more comprehensive testing over a broader range.  Given that the researchers are doing detailed medical and other tests it makes sense to look for more composite patterns.  So maybe the recruitment should not just be to two diets, but also to different regimes with different types of non-medical support.   Some with families willing to take on the same diet for example.  This is an urgent and major issue for all nations and we need to take an approach which is more integrative, looking at things in parallel while preserving the integrity of individual lines of enquiry.  This type of research is key in public health to allow us to combine biological data with statistics before creating crude guidelines.  So lets assume we accept that statins reduce the risk of heart attack; cool take them.  But we also know that Type II Diabetes is one side effect of statin prescription and we know one of the reasons for that is the way statins work on the pancreas.   Now if you have Type II then you are at increased risk of heart failure so guess what happens?   You get prescribed statins.   Each individual causal pathway creates a prescriptive guideline.  What is really needed is an artisan approach in which the multiple interactions between patient support groups and medical staff are taken into account.   Some of our Small Countires programmes will start to look at this, in particular how do we manage clusters in the tails of distributions.

The same applies in fault finding and prevention.   The sheer number of cases where human error is seen a major contributory factor should confirm a very simple truth; human attention is key.  So if we are aware of the possibility that something might be wrong then we are generally more able to spot faults. I’m argue that attention and attitude is probably the key issue in safety (and I can back that up with a recent project in Manufacturing).  Rigid processes habituate people into pattens where they do not pay attention, so more rules, regulations and prescriptive training are contra-indicated but too often mandated to deal with what is a complex issue.   Measuring attitude is more important than measuring complacence both in terms of actual safety but also in terms of management.  Attitude is a lead indicator, compliance a lag indicator.

Now the research for this type of complex understanding needs us to develop different methods for gathering data and gleaning meaning.   SenseMaker® is one part of that but we need a lot more.   Continuing with research methods that assume single causal changes, or (in a way worse) which knowingly restrict themselves to a single chain despite realising the wider issue, is problematic to say the least.  I could go on with other examples, but basically anything involving human motivation and attitude is a complex adaptive system.  Reducing it to controlled chains of casualty may produce neat and tidy recipes or people to blame, but it’s not enough.  Part of the work I plan to do with Bangor University and others next year in the application of complexity will seek to create a trans-disciplinary approach to understanding disposition and dispositional management.  That way lies hope.

9: Against essentialism, defining potential through action I fell in love with Philosophy as a subject ...

Deal with the system as a whole please

11: You can't reduce or aggregate a complex system and trying is wrong a priori Reductionism ...