Regular readers of this blog will know that Cynefin and its domains are going through a period of flux at the moment.  It coincides with a lot of teaching, but also with practice.  Its going to carry on for a month or so then I will consolidate the material.  For the moment all contributions and thoughts are much appreciated.

One of the sub-models I produced was the consensus/coherence way of understanding the complex domain.  The  “coherence” post there talked about different forms or types of coherence and if you track back from that one you will see the developing idea. 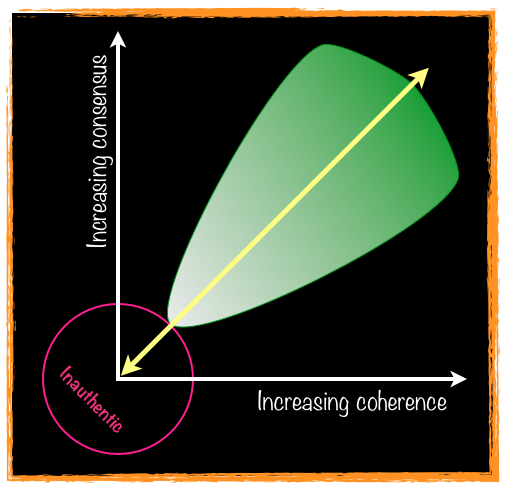 I’ve produced a minature of that version to the right.

One suggestion made (and if the person who came up with the idea would identify themselves I will acknowledge them) was to rotate the model through 45 degrees which would create a better visualisation.  I tried that out at the advanced class in Auckland today and it worked.  But during questions I also realised that I had the green area of acceptable behaviour wrong.  As you increase coherence and consensus the variation from the yellow line of authenticity should decrease not increase.  So I orientated it through 45 degrees and reversed the green bit at which point it was dangerously phallic!

That was easily solved, the point is that movement is a form of dampened oscillation.  When something has just emerged from disorder then the oscillation between coherence and consensus is high, but then it dampens over time.  So I replaced the green area with a green line as shown below.  I then also realised that the division of disorder into authentic and transitionary also needed to be shown so I varied the bottom to account for that.  The header shows this in part, the picture below elaborates.

So I offer the model below, more ideas welcome, its still a work in progress 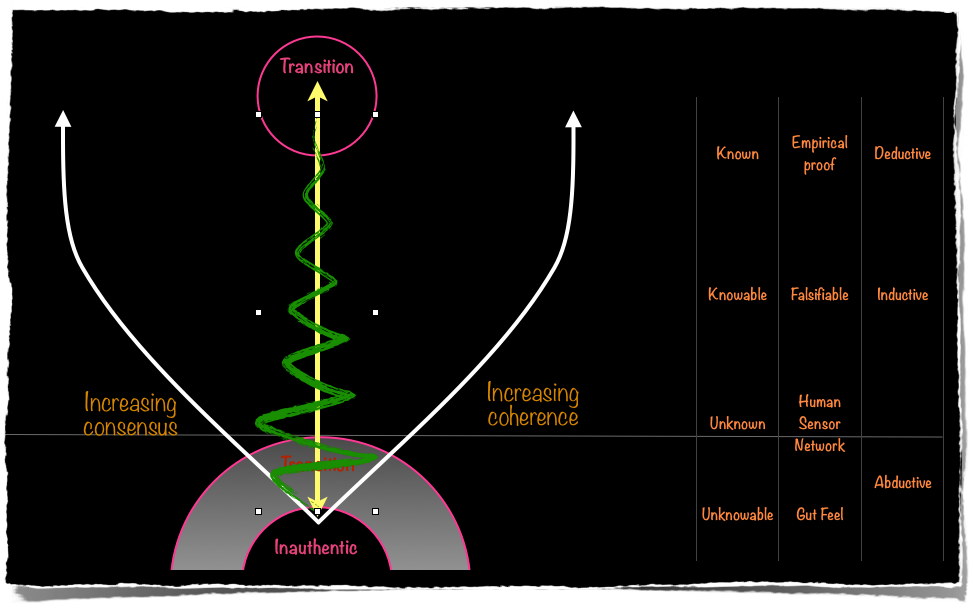 PS: observant readers will notice that posts are going up on different dates.  I’m in catch up mode so apologies.

A busy but brief visit to Melbourne came to and end today with a morning ...

Twice cooked pork is one of my favourite dishes in Singapore and it serves as ...