In this continued series on the Cynefin domain models we now come to Simple, which leave Complex and a more general overview of the cylinder overlapping of all four (thus including disorder) to go.  That you may get over the weekend or in a weeks time depending on internet access at the villa on the Tuscany/Umbria border where I will be holidaying with family next week.

Simple tool some effort to put together as give the overlapping nature, with step changes all the labels had to be reversed and the whole position v complex took a bit of manipulation to achieve. The labels and dimensions have some changes but not substantial ones.  Evidence based becomes self-evident but that is about it.  But the bottom left of the old version is now the extreme right of the new one with chaos a step below.  You might want to read the older entry now as I will not repeat much of the material from that here.

I've also used one of my favourite Gaping Void cartoons to illustrate that this is not a domain to be neglected.  In Cynefin dynamics things go to the domain to suffer entropy death as they are at the end of their life cycle, not requiring constant change.  However that end state may last decades and have high and sustained utility.  It is also a danger zone in which the trade off between standardisation and ossification is ever present.

Like all these domain models I am still working on the colour coding. However the coherent pathway occupies two not three subsections.  The nature of enforcement is key to this domain.  On entry it is all about trade-offs (a name change), accepting standardisation as a price to be paid for efficiency, consistency or so on.  As it progresses that moves from being a trade off to something which is self-evidently the right thing to do which means any sensible response will be pragmatic acceptance.

The problem hits when practice is taken for truth without questioning by authority.  That is the Zombie like enforcement which starts the red danger zone and the slide into chaos.   Cynics are your friend here as they provide early warning of a dangerous shift.  Informal networks finding work arounds, making the system work despite itself (gaming) follows and then traumatic failure.  The direction now is slightly different from the exit from chaos but is still multi-dimensional in nature.

So next up complexity (which is little changed, its the most developed and used to date) then some overall reflections.   As I say you may get this day by day after a couple of conference blogs and then with holiday observations.  Or you may have to wait a week! 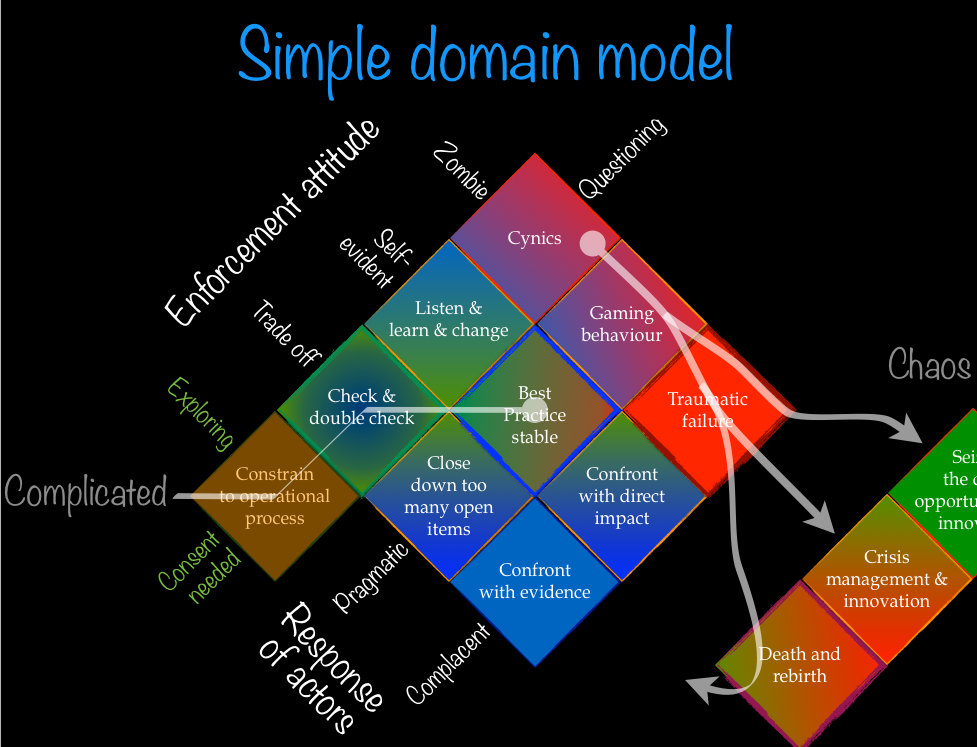 It is a truth universally acknowledged, that any iPod or Car Music collection will have ...