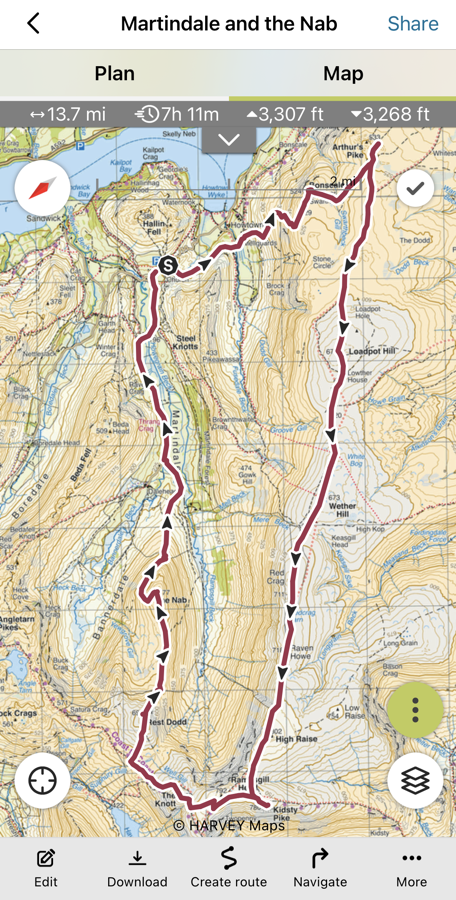 You see a lot of mountain shots in posts here, in part because I spent as much time as I can hiking and carting around a full frame Nikon camera (although today’s picture is from the iPhone.   I took it yesterday from the summit of The Nab, my tenth Wainwright coming to the end of a long day’s hike.  I had just come down the edge of the fell front and centre and managed to survive the transit of the peat hags shown.

Walking for me is a form of meditation especially when I am on my own which is more often the case than it is not.  It is not really an escape from reality, but a way of reflecting on it.  I will say now that we are not ignoring the situation in Europe at the moment and I hope to announce a series of initiatives shortly as, like COVID this is not a story that will have an end, although the beginning was all too clear.  Our goal to provide tools and methods to those engaged both in the Ukraine and dealing with refugees and the wider political context but to do that we have to assemble partners and influence decision makers – and that work is ongoing.  But this blog series is all about walking, or more specifically mountain walking/hiking, as a means of staying sane if nothing else.  Other people have different coping mechanisms but I head for the hills while, thanks to the miracles of modern technology, staying in touch.

As a warning if you are not especially interesting in walking, and the Lake District in particular you may want to skip the series, or skim the anecdotal material which will be a part of each post.

To set the context,  as some of you know I have been on a quest since September 2020 to climb all 214 Wainwrights in forty days or less.  That involves a lot of long walks and I need enough daylight so November to February are more or less unavailable for this quest, which is not to say that I don’t head for the hills anyway.  On October 6th last year I reached day 28 and 149 Wainwrights in all, but my plan to get to within a week of finishing was stymied when I slipped coming down Red Screes and damaged my knee.  I managed to get off OK, if slowly but had to abandon the rest of the week.  Due to neglect of my body prior to my reversal of Type II Diabetes (which also restored me to hill walking) I have zero cartilage under my knee caps and any twist of damage leaves me disabled for a couple of weeks.  Thanks to kinsinology tape, a good physio and a weekly strength and conditioning class I can walk for twelve hours plus without rest and in difficult terrain, but I go slowly heading downhill or over rough ground where I know any slip would put me out of action.  For those concerned I have a survival bag, emergency signal beacon and always enough food and drink for an overnight wait for mountain rescue if it comes to it.

So with the end of winter gloom I managed three days in the Western Fells in brilliant weather at the start of March, staying in local pubs.  Now as the month comes to an end I am settled into my favourite holiday accommodation for eleven days and I hope to complete the quest.  Two days so far of the eight days to finish.  The first was on Sunday with Iwan involved some difficult and trackless terrain but yesterday’s walk was in the main on good paths.  But two days of ten hours walking and I need a rest day so today has been email, conference calls and now, at the end of the day a blog post.  Overall I have now climbed 173 of the 214, walking over 368 miles with 106,298 feet of ascent (and descent) in some 290 hours over 33 days and expect to finish in 39 days on the first fell I ever climbed – Nab Scar – on a trip from University back in 1973.  The original plan was to finish on my 68th Birthday this coming 1st April but I now have a speaking engagement in Dublin that day so hopefully the last day will be the 29th or 30th but I only have a couple of days buffer stock left so the final day or two may have to wait for the end of April or May.  But I will report progress.

The map to the left gives you an idea of sort of routes you have to put together to fit everything into a restricted timetable.  Marshall’s book which gave me the inspiration for this gets it all done in 36 but I am a little old for that.  If it hadn’t been for really bad weather on Scafell Pike back in 2020 I would be completing in 38 days but that’s life.  There are very strict rules around this whole endeavour which I have imposed on myself.  In summary:

I could add to that the desirable quality of a pub at the end of a walk but that is not a condition.  In the main established tracks are used, but from time to time, to make the day’s quota one has to go off piste.  Sunday was one example of that and it took Iwan and I around an hour and a half to travel less that half a mile as the crow flies but it was down a near vertical and slippery hill side.  Walking alone is very different from walking with friends, or strangers but I’ll return to that in a future post.

So I’ve set the scene.  Tomorrow I will be up before 0600 to get myself sorted and onto the fells by 0800 as I’ve probably got a solid 9-10 hours of walking and over 4000 ft of climbing.   I may not post every day, but I will be posting thoughts arising from the walks, and about the nature of walking for mental as well as physical health.

It’s winter solstice and as I live in the heart of Neolithic England we are ...

In my last post on the value of walking, and my Wainwright quest in particular, ...