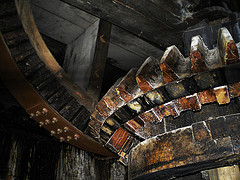 An odd sort of day today, the first of two in a small session discussing system thinking, complexity and the like with people from very different traditions.  A friend in the US had started the process trying to get a diverse group of people together to secure funding for something.  After a few phone calls I got frustrated and suggested that a few of should get together and talk about it.  Part of the attraction there was an excuse to get in Cambridge Mass and the MIT bookshop but also there are some real issues that needed discussion.  As things worked out we ended up in London not Boston and a few key players could not make it, but the participants were more than enough to motivate me to turn up.

I’m never fully sure what labels to apply here although I sometimes designate it as systems thinking v complexity but I no that isn’t the best way, neither is restricting systems thinking to systems dynamics.  I know there are some key differences between one dominant approach and one emergent and they can be characterised as:

Not in a small group I hoped that we might have a good debate, but that brought out another distinction between those prepared to defend a position and those who see that as being overly assertive.   I faced a challenge on that at the end but I am no longer prepared to play those games.   I come from a debating tradition and it has as much value and deserves as much respect as one based on dialogue.  Both show respect neither has a monopoly.   Neither is it a male/female thing although it can be in Norther European Culture.  So I’m more than happy to take on the end of the day round table attempt to put me in my place and I come out fighting (and did).

Either way lots of interesting things and the above three differences were articulated and not resolved.   I’m not sure its possible by the way.  I validate the first (along with backcasting and the like) as valid techniques in the complicated domain of Cynefin but not the complex one.  We started to see another difference emerge on interpretivism by experts and the descriptive capability of SenseMaker® but that was also interesting.  I decided to live with a few hours talking about how the world should be in a few decades time.   I find it interesting but think it has little utility but I know that for some it is very important.  They seem unable (my phrase they would describe it differently) to talk about the present other than in the context of a future ideal state.  I know they feel my unwillingness to let go of theoretical validation frustrating so we have some differences.

More tomorrow when we start some of the mapping (I accepted the idealised future stuff as the price of getting some focus on theory tomorrow).  More detailed discussions over dinner also indicated the utility of the session.   I really like these small groups of people from different perspectives.  Once you get through the initial horrors (and one needs to get real about this it will happen) a lot of value comes.   Hopefully tomorrow ….

I took the train to Cardiff yesterday to watch the Blues play Leinster.  We lost ...

After the cathartic moments last night we moved on this morning spending forty minutes discussing ...