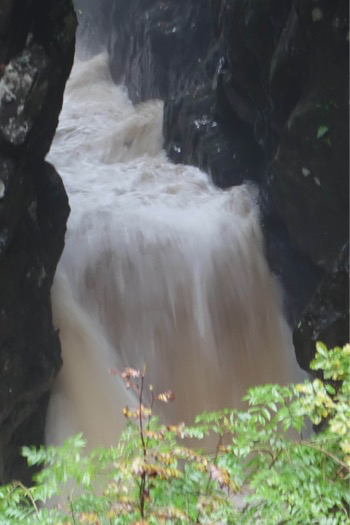 Today started early with a brisk walk in the rain to explore the area before getting a lift back to Glasgow and the train home. I really should have been better organised and spend a couple of days here and taken in a Munro or Corbett, but time did not permit and the rain was torrential, but it was a good walk. In the course of it I reflected on yesterday’s keynote, planned for half an hour that extended to over an hour with more for conversation. Probably the single most important point I attempted to get across was the need to act in the present to shift things in the right direction, rather than defining an ideal end state and trying to close the gap. Now this has been a long term theme of my work, and it remains one of its most important aspects.

In essence with any change programmes either a small scale one in your family or a major attempt to change attitudes with water use we are dealing (sic) with a flow, not a static condition that can be assessed, evaluated and determined. In a complex adaptive system we manage the evolutionary potential of the present, we remain open to emergent possibilities, when those opportunities emerge we size the day by taking actions that will nudge things in the right direction. Nothing stays the same, everything we do changes what is, and changes what the various plausible future states.

Shifting the attitude of multiple communities so they are aware of the implications of climate change or water issues for their immediate or generational needs. By generation needs I mean something that will impact on someone we know, which means grandchildren at the furthest remove. Anything more abstract may work for the activist but not for the masses. In effect we have to create an attitude in multiple communities that starts to initiate a phase shift in attitudes overall which then creates a new political reality that enables change. Dispositions reach a critical point at which a small catalytic event can then trigger major change. Think of the viral picture of drowned boy that changed attitudes to refugees in Europe, the self-immolation that triggered the Arab Spring. These are not causal events, they trigger a phase shift in a system disposed to massive change.

So changing the dispositions of a system is key, and that starts with how it is, not how you would like it to be.

I survived my first night in a bunk bed since 1978 relearning old skills: balancing ...

Laudato Si'is the latin title of the encyclical letter On Care for our Common Home ...