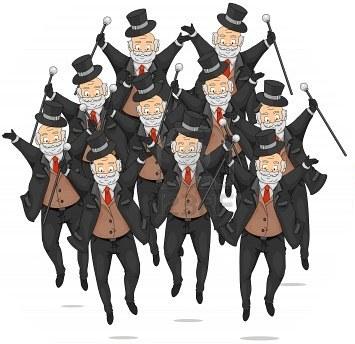 So we have a choice between the ten commandments or a reference to cuckoos. As a symbol of immorality and disorder it fits with Christmas as a time of misrule and sexual license. It also carries a sense of reversal, for that period a labourer might be a lord. With Ladies, drummers and pipers you get a real sense of a major party being set up. By the time the song is sung in full we will have 36 ladies, 30 lords, 22 pipers and 12 drummers! Some sources also suggest the extended impact of drugs (specifically the post 16th Century use of the ergot fungus) and alcohol.

So lets party. The Lords of Misrule; appointed by lot to preside over the Feast of Fools at Christmas/Saturnalia have a long history. For a temporary period servants became the masters, satire ruled the rulers and they had to show good humour. In some darker legends the Lord of Misrule had total license for a period but was then ritually sacrificed given a whole new take on feast, drink and be merry for tomorrow we die: licence has consequences in the sense of 1 Corinthians 15:32 but I may be stretching things a bit there. interestingly the practice was banned by Henry VIII, restored by Mary I and then banned again by Elizabeth I which says a lot. Mary always gets a bad press, but then she didn’t have Shakespeare to run her propaganda machine.

We could do with a little more of this in OD. Too few executives face up to the implications of their practice, they are insulated by multiple levels of management from the day to day reality of their decisions. Speaking truth unto power may be endorsed by the various mission and value statements they happily propagate but God help those who practice it. You can’t expect individuals to assume that level of risk. An executive who feels the need to tell people that failure is a learning experience is probably not to be trusted. It is mostly a Darwinian technique to eliminate the fatally naive early on in their career. Far, far too much of OD practice is about trying to get all individuals to exhibit desirable behaviours which is a thankless task that deserves to thanks as its fundamentally mistaken.

Interactions between people, communities, things and processes have a far more profound impact that an supposed innate qualities or competences of the individuals engaged. We are social creatures and over the years we have developed a range of practices to make certain types of behaviour more desirable, along with supporting narratives. The Lords of Misrule are one example of this in history but there are others. The formal role of Jester, able to say things that others could not is not just a medieval practice. I’ve seen in in modern organisations, allowing someone (as long as they wore the silly hat) to enter any meeting and ask any question of anyone without fear of punishment. Not the ritual act of self humiliation (the hat) that grants permission to humiliate for learning in turn. Another benefit is that the annual release of tension allows a more ordered state to continue thereafter. If you have ever been in Basel for one of the two annual festivals you will know what I mean: for two days the Swiss are suddenly (and scarily) not Swiss ….

Now I am not suggesting that will work all the time, or even at all. The point I am making is that systems need to be designed to allow dissent to surface without allocation of blame. Further that those in power need to experience the impact of the exercise of power in their own realities. There are whole range of approaches and techniques that work there. Our own use of ritual dissent and also a variant of MassSense (more on that in the new year) would be examples. The use of archetypes referenced in an earlier post in this series (no I won’t link go read them) is another. Designing in the capability for seeing things through another’s eyes, to be exposed to criticism, to reality are all key aspects of OD work but are sadly neglected.

From this point in the series continuity gets rather difficult. The various known versions of ...

We are probably still in the party theme section of the carol and destined to ...