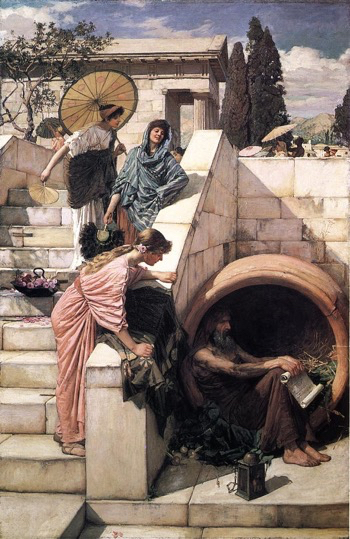 So in this final post on the 3Cs of research in organisations I’m returning to the Cynics. I might have been better starting with this image and saving Cynical Dreamer for the end but it is too difficult to unstitch that now. Remember I am using cynic more in the philosophical sense of the word that the modern pejorative label. Remember in that first post I pointed out that for the cynics the purpose of live was to live in virtue in agreement with nature, rejecting conventional desire. It is that theme I take forward in this final post, although it will not be my final word on the subject.

I’m also going to try and rehabilitate the idea of the curmudgeon, shifting it from the negative connotation of a crusty ill-tempered and surely old man eager to “shake his fist and spout disagreeable opinions” to a valuable asset and a label to be treasured if you have earned it. Yes, like Socrates there is always the danger of hemlock on the horizon but that is a price worth paying for at least some members of the community. And society needs its cynics as do organisations.

I found a rather nice web site on How to Become a Curmudgeon which takes a more positive view and is full of good advice as well as some warnings. I’m using that site as the basis of this first draft of the curmudgeon’s manifesto.

The seventh is all my own, the other six developed from the referenced site. If anyone knows who wrote that by the way I want to meet them! Interestingly while I was writing this series I picked up on an interesting post about the potential failure of string theory as a scientific theory. Lovers of the Big Bang Theory will now realise that Sheldon’s move may have been prescient in Series 7. Now I am not competent to make a judgement on that, but the post the split between rationalism and empiricism which has overtones of that between idealism and realism in the humanities. I’ve never either of the two sets of alternatives as incompatible by the way, it is a matter of context. Human systems in particular are not susceptible to the research methods of Newtonian Physics or the nonsense of double blind trials and the like. But the empirical findings of science act as constraints and provide guidance within those systems.

That has been the theme of this series of posts and a lot of the twelve days of Christmas ones. I’ve got a lot more work to do on this and I’ve just accepted an invitation from John Seeley-Brown and Ann Pendleton-Jullian to present on this at the New York Library in April so I have a deadline! Given the previous three weeks will see me trekking in Nepal with daughter I should be refreshed by the time I get there. I’ll also run it out at the forthcoming training programmes in the Yukon and New York.

For those who were emotionally deprived in childhood by not being read the Pooh stories ...

An article in the Washington Post caught my attention at the end of last year. ...