The context of decision making 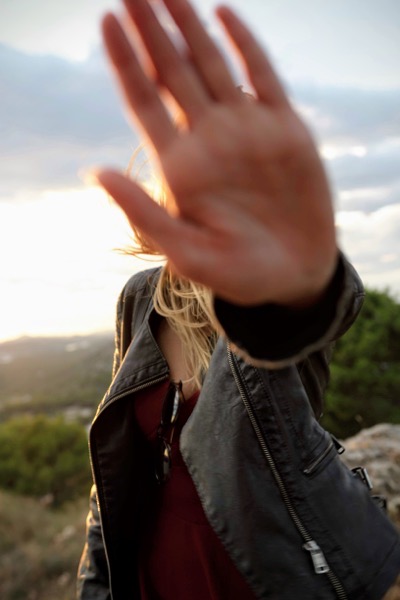 This is a follow-up to my earlier post which used the metaphor of navigation to emphasise the importance of context for decision-making.  I then summarised the three frameworks that anchor the various Cynefin methods and tools, linking to the relevant blogs and a recent keynote at KM world which summarised all three.  I said there that context should always come before and other questions such as authority & consent.  But we can’t separate our perspective on the future from our ability to assess the current context so this is all some form of entanglement of situational assessment, scenario generation and decision-making at various levels of scalability.  Each will have a different emphasis and time scale.  I am also using ‘scenario’ in a very generic sense – not just carrying out a forces and factors analysis and generating unbelievable stories.  In a sense of we look at the work of Seth and Clark and their ideas about the role of micro-hallucinations in decision making then we are always engaged in projecting future states and testing them for coherence.

One general argument from the Cynefin eco-system of naturalisation sense-making is that situational assessment has to be divorced as far as possible from any determination of future actions.  Humans by their nature generally assess a situation based on their preference for action.  Another key position is that dichotomies, especially Manichæian dichotomies are, more or less without exception, a bad idea.  Unfortunately, social media and most large consultancies tend to two-column tables with past sin vilified by exaggeration on the left, and future virtue idealised on the right.  In fact, very few decision-making practices that have emerged from human evolution have no utility.  There is also a generation North Atlantic assumption that decision-making is about decision-makers as individuals with supposed leadership qualities that can be either identified and/or trained.  I’m using North Atlantic here as a shorthand for Northern Europe and North America which is preferable to talking about the West and East.

There is also an issue with the assumption that the nature of decision-making should always be formal and explicit in nature.  I remember once when I was doing some work with Nato and had a session with the then Director General George Robertson.  I’d been looking at the nature of strategic decision-making in Brussels which was actually pretty effective.  The formal meeting would comprise much argument and posturing and would end inconclusively. All parties would then meet in smaller groups over coffee or meals and talk about the issue from which a consensus position would emerge that would be presented as a novel at the next formal meeting.  The process allowed the formal statement of positions to be made to set the wider context.   It is also something you are taught in negotiation, namely, get all the commodities on the table and find their relative value to the parties before you start to dicker or haggle.  Two of my favourite words, by the way, dicker being of US origin and liked to ten hides, used as a unit of trade.

Now in the Jason Yip post which started this series, he suggests that decision by unilateral authority tends to poor quality decisions with little buy-in, while a decision by consensus simply takes too long.  He proposes that decision by consent is the best compromise between those. Now as a general principle I’d agree with that but it’s not that easy.  For example, the authority may not be formal, but may still be there.  I’ve had to learn that over the years (and I still make mistakes).  You don’t have to exercise authority to have it, people may not want to dissent but they take a passive-aggressive position of simply doing nothing on the basis the problem may just go away.  I have both sinned, and been sinned against in that respect over the years.  Consent cannot just be verbal, it has to translate into action.  So we need to add a dimension between the ostensive and the real, between apparent and real consent to the mix.

And we don’t stop there, next up is time and timeliness.  In some contexts, the absolute authority will gain rapid consensus and consent, in others one or other or neither.  Jason makes the point that reversibility is a factor – if you can step back and reverse something then its safe-to-fail, if you can’t then you need to hold the decision as long as possible – he talks about the “last responsible moment” from the Poppendieck book Implementing Lean Software Development.  A concept which I like.  There is also a clear rule in the EU Field Guide about taking decisive decisions in a crisis not to resolve the problem, but to create sufficient stability to allow new options and possibilities to emerge.  Time, of course, is linked to consequence, and there its not just about what we do, its also about what we don’t do.  A sin of omission is as mortal as one of commission after all.

To all of that, we can add the preferred decision styles of the various actors and some of that is habitual, and some cognitive diversity.  I have a form of dyslexia and really can’t see why it is a problem for people if I suddenly make a connection to something that for them seems unrelated to the problem at hand, while for me it may provide a novel solution.  Some people can’t take a debate without feeling personally attacked.  Often a decision-maker (or makers) are unaware of the various alternatives 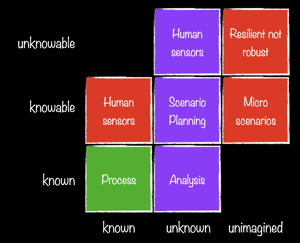 As I’ve been writing this an older model – over thirty years old came to mind which involved two overlapping two-by-two matrices (thanks to Gary for reminding me of it).  It was originally inspired by an allergic reaction against Johari windows and I’ve reproduced it to the right and have stayed faithful to the somewhat garish style and font.  To be clear I now think it’s wrong, but it might be useful so I started to explore it a little and have put up a couple of new versions on social media.  I’m going to finalise that over the next week and will publish it here.  I’m also, in this series, going to look at the wider ecology of decision making including the difference between distributed and delegated decision making which also involves a shift away from individuals and the confusion of emergent with causal properties.  I’ll leave that one hanging without further explanation for the moment.

The overall point here, and indirectly the reason for the two photos I’ve used is that we need to start to think about people acting collectively through process, not idealised behavioural characteristics of individuals or leaders, I had an exchange on that subject with Steve Denning in Warsaw earlier this year and realised I needed more explicit in my criticism of that approach.  Some things we just need to say stop, and they often verge on abuse.

I may also tackle the shibboleths of single, double and triple-loop learning which I need to do at some stage and I need to flesh out my opening phrase “entanglement of situational assessment, scenario generation and decision-making at various levels of scalability”.  I hope to get all of that done before I start my Christmas series which, this year, is going to focus on metaphors.

The banner photo of a party is cropped from an original by Mario Purisic, opening picture of the ‘handoff’ is  by Philipp Wüthrich both on Unsplash

So it's early morning here in Dallas and I’m still in part on UK time. ...

Over the last year or so I’ve been reviewing some of the original knowledge management ...