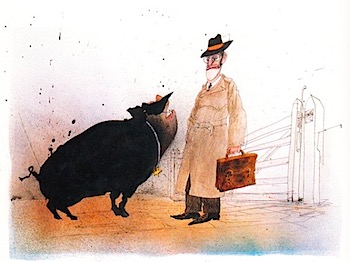 The most chilling aspect of Animal Farm comes right at the end: “The creatures outside looked from pig to man, and from man to pig, and from pig to man again; but already it was impossible to say which was which.” It stands as a warning to anyone who accepts a temporary compromise on the basis of necessity. It came to me this morning after I posted on the need for theory yesterday. In that post I used SAFe as an illustration of a method, which if taken as stated, cannot handle complexity a priori. That reminded my that one of the most frequent defences from people I respect is that they know its not really coherent but (i) they will make it work anyway in practice by simply ignoring a lot of it and (ii) its a way to get the C level buy into Agile.

Now I criticised the first of those yesterday, now I want to handle the second. The thrust of my concern should be clear, compromise all to easily falls into conformity with the result that the revolution is lost and the rebels betrayed. Equally a purist attitude to the revolution results in expulsion, exile and death. It’s all there in Animal Farm and I really must work on taking the Agile Manifesto and playing with what Squealer would have done if it had ever been painted on the barn wall.

So what is the balance between purity and compromise? To some extend I think the answer lies in my argument from yesterday. If what you do is coherent with the theory you are propounding then its probably OK, if it largely contradicts it but you think you will be able to change things over time then it almost certainly is not. Now I have spent most of life trying to get new ideas into conservative organisations and I’ve had my share of success and failure. A range of strategies are available:

Now there are others, but becoming enthralled to Mr Whymper’s academy of accreditation and training is not the solution.

I couldn’t have found a better image for today’s post which is about the ...

I recently heard that Complex Acts of Knowing had been assessed as a classic ...