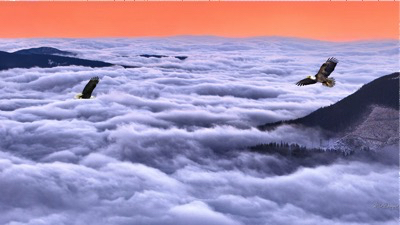 Most people who have walked in the mountains will have experienced a temperature inversion at some stage. You suddenly discover yourself standing above a sea of cloud with the odd peak visible but the vast majority of the landscape hidden. All is quiet, all mysterious the opposite of Frost’s wonderfully evocative line The line-storm clouds fly tattered and swift. Such moments are precious, but they also involve hazard, in deed after taking a deep breath we might cry out Oh, come forth into the storm and rout, And be my love in the rain. Maybe a little over metaphysical, but I rarely think of the natural world without a line from Robert Frost coming to mind. Those are from A Line-Storm Song for those not familiar with his work. We don’t have the pictured eagle’s ability to explore the space but we have to commit, and always it seems safer to stay on solid ground that to plunge down into the cloud bound slopes with their unseen and unseeable hazards. That point of solidity in a field of what otherwise seems threatening and dangerous is a metaphor for the role of disorder in Cynefin.

Now I really wish I had started writing this blog during by IBM days as I would then have a full record of the evolution of my thinking here. The domain was always associated with the idea of uncertainty and also a linked realisation that two by two matrices were de facto categorisation frameworks. As such there was a natural tendency for humans to place things in the categories based on a partial data scan simply because they seemed to fit. By this time I was less into knowledge management, more into complexity and sense-making. I was also starting the realise the impact of inattentional blindness best illustrated by this famous reference from Drew, Vo & Wolfe (Psychol Sci. Sep 2013; 24(9): 1848–1853)

What about expert searchers who have spent years honing their ability to detect small abnormalities in specific types of image? We asked 24 radiologists to perform a familiar lung nodule detection task. A gorilla, 48 times larger than the average nodule, was inserted in the last case. 83% of radiologists did not see the gorilla. Eye-tracking t that the majority of the those who missed the gorilla looked directly at the location of the gorilla. Even expert searchers, operating in their domain of expertise, are vulnerable to inattentional blindness

So at a workshop in Warwick University, with Professors Boisot and Merali amongst others I first drew the current form of Cynefin with five domains, but not yet the catastrophic fold, that came later when I was subject to friendly criticism (well it didn’t feel friendly at the time) from Boisot and Spender as a punishment for receiving an award for originality at the Academy. My idea then, and it hasn’t changed since, is to recognise that the power of Cynefin is to allow people to distinguish between different ontological states, or different types of system and change their decision behaviour accordingly. That is, and was, a revolutionary idea. Prior to this work most approaches assumed a single ontology, approaches such as situational leadership hinted at differences but did not make the leap to state that the systems themselves were different. If we have different ontologies then there must, de facto be some type of phase shift or change between those states and from that point the modern manifestation of Cynefin was born.

The most simple definition of disorder in Cynefin is the state of not knowing which domain you are in. As such it is sometimes confused with chaos but that is a false match. In disorder you are not uncomfortable, although you should be! Instead the have the sort of false confidence which comes with the clear sky of my opening metaphor. In the domain of disorder people feel comfortable, they make decisions based on the habituated patterns of their past decision making, avoiding failure; sometimes repeating success. So for someone who has spent several years in a bureaucratic role all failure is a failure to confirm to process or the need for a new process. Experts tend to complain they need more time and resource to use their analytical skills. The bureaucrats assume they are in the obvious domain, the expert that their are in the complicated domain. Chaos of course always attracts fascists, they want to be the one to impose order and complexity tends to attract those who like multi-perspective conversations. All in all disorder is the state of assuming you are in the domain in which you feel most comfortable, so at best you have a 25% chance of being right! Another way of saying this is the following well known quote:

It’s mostly attributed to Anaïs Nin but she herself references it to the Talmud so if I am to believe quote investigator the attribution should be Rabbi Shemuel ben Nachmani, as quoted in the Talmudic tractate Berakhot (55b.)

Another, more advanced use of disorder is an entry point, to assume up front that you are in a disordered state and then seek to explore options to exit. The four points method for Cynefin construction takes this as a starting point. We also have the use of disorder as a phase shift mechanism between non-adjacent domains – namely complicated-chaos and ordered-complex transitions, both of which are more hazardous than attempted to move between a horizontal or vertical boundary. I’ll address those transitions in my final post (for the moment) on the domain of disorder tomorrow.

The quote is attributed elsewhere but I think that is the original. A goal of Cynefin is to see things as they are, or at least as they are perceived by people other than ourselves and those we feel comfortable with. More on that tomorrow.

I’m out to Milan tomorrow and I am starting to feel like a Typhoid Mary ...

I made the point yesterday that the disordered domain within Cynefin is one of false ...