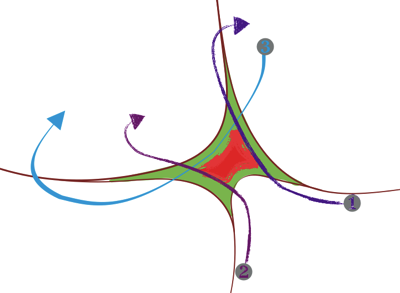 I made the point yesterday that the disordered domain within Cynefin is one of false confidence, assuming you know how to act without first making an ontological assessment. It is the opposite of chaos in terms of the individual response as to the decision maker nothing seems to be other than as expected. That aspect of disorder is in effect the sub-domain of inauthentic disorder coloured in red on the illustration. But there is also the use of disorder in terms of dynamic transition between domains, authentic disorder and coloured green. I keep thinking about changing the authentic word but I haven’t found anything better so it stands for the moment. In this final post (for the moment) on disorder I want to look at those transitions.

Upfront transitions between directly adjacent domains do not need to use disorder in other than one set of circumstances more fully described in the first disordered dynamic below and that is the lowest risk, mostly easily managed anyway. To move between Complex and Complicated you increase the constraints to see if you get repetition and/or predictability; if so the transition is achieved, if not try again. Relaxing constraints will shift from Complicated to Complex. Complicated to Obvious and back again is simply a question of the level of enforcement and the degree of flexibility afforded to those with competence. Complex to Chaotic is forced innovation, Ordered to Chaotic is a catastrophic failure induced by complacency.

The shift through disorder is needed for non-adjacent domains. I’ve identified three here and have deliberately not invaded Complex to Obvious as (at the moment) I can’t think of any legitimate need for that dynamic. All movements through authentic disorder always carry a danger, so the trajectory needs to be controlled and have sufficient momentum to prevent falling into the red centre. Someone once suggested that disorder was like an open cast mine. Trucks driving around the edge in danger of falling in. So what are the three?

Now there is more to come on disorder. It may make sense to have more than two subdomains (my first two examples open this up). I also need to continue the work I am doing on containers and coupling as a new approach to constraint and also to problem definition. I ran the first ever exercise on that in Milan earlier today. But for the moment its time to move on from disorder.

2 responses to “The domain of disorder (iii)”

Most people who have walked in the mountains will have experienced a temperature inversion at ...

Most readers will have seen this 1937 picture before. It is used to illustrate the ...