The idea is you break the chains Guys, not rejoice in ignorance

There is a peculiar populist product of our post-modern age which argues that chaos is the 'archetypal state of everything' and that any attempt to create any type of structure is simply a sense-making activity or an abstraction overlaid on the unknowable.  It's a sort of view of Plato's allegory of the Cave.  The allegory appears in The Republic and Socrates describes a group of people who have been chained in a cave facing a blank wall.  All they can see are the shadows of real people and activity cast by a fire on that wall.  Their knowledge is confined to the shadows to which they ascribe form.

Now the key point that Plato seeks to make here (and elsewhere, Phaedo from memory) is that the role of philosopher is to break those chains and generally to enlighten the prisoners.  This is achieved through knowledge.   Aristotle took this further and laid the foundations for modern science.  The problem, as Plato points out in The Republic, is that turning to escape they are blinded by the fire.

In its populist form this ends up with multiple variants of all views are valid, its OK to make contradictory statements because its all about learning, anything that works for you is OK and so on.  I satirise some of this in my Children's Party story with the reference to not worrying about your house burning down as it was socially constructed anyway.  I should add that while I disagree with people like Rorty and others I find a lot of value in their writing and I'm really talking about the populist product not the considered philosophy here.

Now the idea that chaos is a natural state at other than a quantum level (and that is open) is bad science.  In Biology and Chemistry chaos never exists for long before constraints and structure appear, complexity is more the natural order of things and humans have this added ability to create order.  We are also able to create a constrained space within which random or chaotic conditions pertain for a context.  This is the Wisdom of Crowds or Distributed Cognition function.  The populist, and ill informed view of physics tends to forget the granularity of the different disciplines.

The real problem however lies in the realms of decision making and ethics.  If everything is of its nature chaotic then there is no way of determining what is right and what is wrong, evidence can be dismissed by the magicians and water diviners of chaos who can exempt themselves from any evidence based approach or for that matter proper research or citation.  We get a lot of stream of consciousness type stuff here.  As I say its not just a knowledge issue, its also an ethical one.  I'm afraid I can't live with a philosophy that says the abuse of children is simply a matter of cultural relativism, or whose logic allows that conclusion.

Yes we need to be careful of scientism, but that does not mean we have to reject science.  Something that Mary Midgely expresses so well in Science and Poetry.  Accepting that we don't know things perfectly does not mean that they cannot be known, or for that matter are not known somewhere.  I made some comments on this in my Thinking about coherence post back in August.

Some people seem caught in a false dichotomy, they despise order in the form of Scientific Management, and posit Chaos or Relativism (which I think is what they really mean) as an alternative.  The wonderful thing about complex adaptive systems theory is that it reconciles this from an either/or to a both/and.  Three types of system naturally exist, we should not privilege one, to do so is to diminish not only understanding but intellect.

I love this 2008 tryptych by Kombo Chapfika entitled Plato's Cave, in part because it (to me) portrays the prisoners breaking free of their chains, something that knowledge can achieve.  We don't need to be restrained by the chains of confusion that the chaos merchants portray.  Down that path lies the Tea Party and Creationism as well as more apparently laudable beliefs. 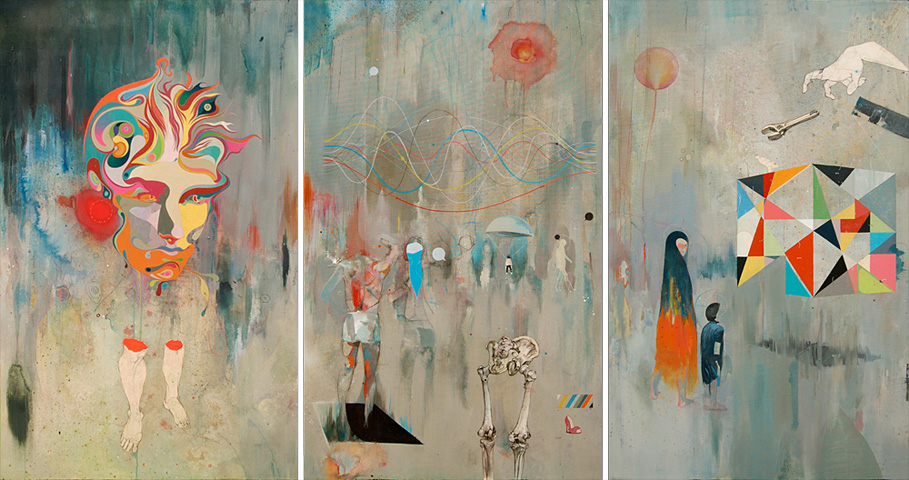 knitting “up the ravell’d sleave of care”

Just in case anyone is worried I'm not planning the death of a King, but ...

A person through Portlock

Various things came together this weekend.  I had arranged a meeting with the owner of ...