Up to North Wales today for a series of meetings on SenseMaker® development and the start of an exciting new project on governance of which more in a few weeks time.   Now my view at the moment is that if I have a meeting in Bangor I am going to find times for the hills and today was no exception.  I got away later than expected and wasted time in Betwys trying to find a holster for the new camera without success.  In consequence I got to the Ogwen Valley after lunch and without the means to safely carry the new camera, so I reverted to the small Sony.

My plan was to ascend Y Garn II from Lynn Ogwen bu the direct route and then take in as much of the ridge above the Nant Ffrancon valley as I had time for.   I hoped to add in the extension to Elidir Fawr but as I set off I thought I would have to sacrifice that.   Elidir Fawn is an odd mountain, it just makes 3000 feet but in the all the years I have been walking and climbing here I had never visited it.  It stands on its own above the slate mines of Llanberis and when we came over as a family there were always what seemed more attractive walks.

It was one of those hazy mazy days that you get in the hills where you want to be a landscape painter rather than a photographer.   You can get a sense of this from this picture (which I rather like and really really wish I had had the Nikon 600 to take it with). 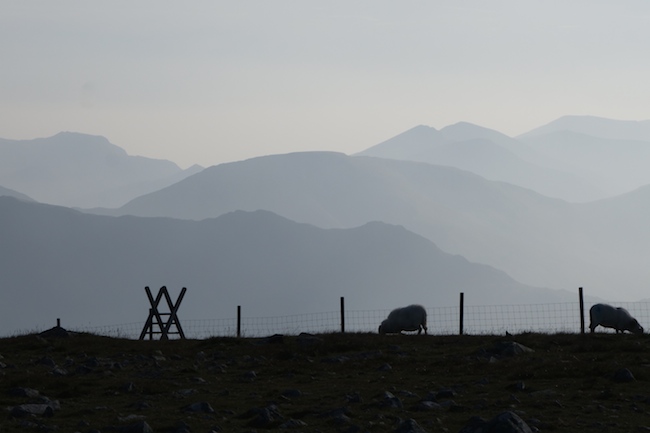 A day for feeling the presence of the mountains without requiring undue clarity in either physical or mental pictures.

I made the 2000 near vertical feet up Y Garn in good time and set off up the ridge bypassing the summit of Foel goch as Elidor Fawn loomed and promised much.   It was more than worth the effort with some of the best views in Snowdonia, a place to camp overnight for sunset and sunrise pictures alike.   The long rocky summit ridge rivals the Glyders for walking interest and supposed them for views.  Elated I returned over Bwlch y Marchlyn to the summit of Mynudd Perfedd and realised I had to make some choices.

The easiest option would be to continue to Carnedd y Filiast and then descend to the valley and the back road back the car.  That would be safe and if I ended up walking in the dark it would be on a road not a mountain track.  But I had not climbed Foel-goch which left an empty feeling in my heart and the weather was so good that I took a too hell with it I have got a torch attitude.  So I completed the ridge then retraced by steps but this time including the sharp accent to Foel Coch and the longer ascent to a point just below the summit of Y Garn that would allow me to retrace my steps.

As I walked I remembered the first time I had come here at the age of 16.  It was a wet day and I was Youth Hosteling so I set off up the Devil's kitchen planning a short walk.  I was wearing the yellow oilskin cape and sou-wester that I used in those pre-high tech days and my old Zenith E camera (my first SLR) was protected from the elements as a result.  At the top of the Kitchen the weather was from the east so I turned right to have it behind me and made the first traverse descending to Nant Francon through the quarry at the end of a brilliant days walking.  I also got one of the best shots of Tryfan that day which I must extract in digital form from my transparencies at some stage.  Places evoke memories and increase your sense of belonging in a place like this.

To cut a long story short I made it back to the car just before a torch would have been necessary on what is rated as a hard/severe walk in the guide within the time specified and feeling good.   Now after a shower its to a meal with the team and then I need to work out how to persuade them to engage in a dawn ascent on Friday ….

Today was one of those days that occasionally hit you when you travel a lot. ...

From the malarial swamps of Darien

It would be too easy to comment on the Scottish referendum tomorrow, or even late ...