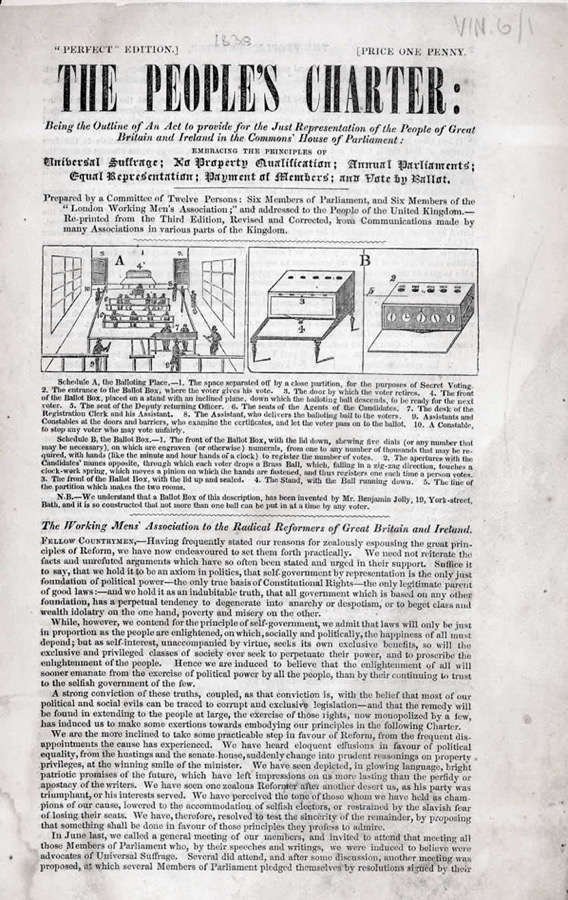 For the last two weekends, I’ve been walking the moors above Merthyr Tydfil.  It is a landscape formed by geology and people over the ages.  There are multiple Bronze Age burial mounts on most summits and the whole area is dotted with the ruins of stone build sheepfolds and small substance farms long since abandoned.   The reservoirs needed to drive the waterwheels that powered the industrial revolution are still all physically there, if in the main drained of water.  But the leats created to feed them are still there and could easily to resurrected.  All the slopes are littered with quarries and sinkholes.  The latter arising from collapsed passages and caverns in the water eroding limestone under Millstone Grit caps.  Many of the tracks are former mine railways and there are massive lime kilns that fed the agricultural, and then industrial needs of the area.  Boundary stones lie hidden in heather or stand, stark and alone on hilltops to designate who owned what.  You are on the open moor, the sound of larks dominates the space, but within plain sight are the post-industrial dwellings associated with now abandoned mines, ironworks and so on.  They exist cheek by jowl and if you know your Welsh history and literature then you will know the importance of this proximity.  On Sunday after chapel, or at the end of a shift, it was always possible, within an hour or less to ascend to the hills and moorland that surround and create the famous Valleys of the industrialised south.

The role of this area in the early industrial revolution is profound. We walked past Pitwellt Pond which was a source of power for the Dowlas  Works in their heyday.  We then walked up the stream to the sluice gate on a leat which was used to divert water captured over the whole of the moor into said Pond.  Having two enthusiasts (Chris and Paul) with us what they didn’t know as we walked around these sites, now simply a part of the landscape frequented more by the sound of larks and the odd call of a cuckoo than the noise of the industry was researched and sent via email or social media overnight.  We came across the remnants of a winding drum towards the end of the walk, the latter part of which had taken us along an old quarry railway line.  Later that evening it had been identified and a 1919 map showing its role in a tramway dropping down to the Brecon and Merthyr Railway had been sent around the group (see right). 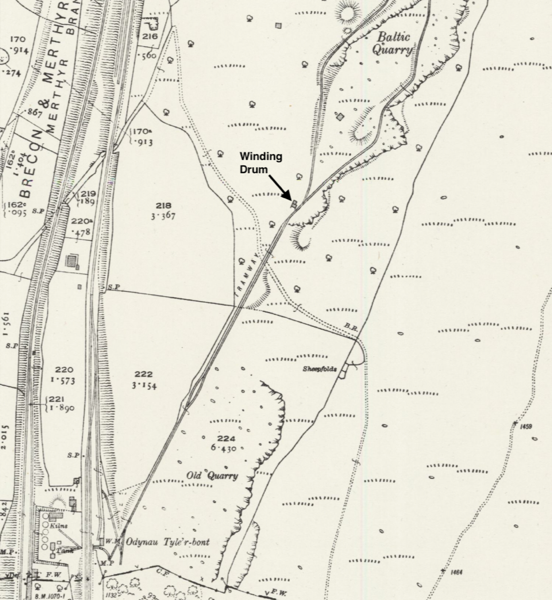 The boundary stone had been linked to an obituary to the landowner from the website of the National Library of Wales.  This is not a spectacular landscape of mountains, ridges and valleys, but it is a landscape of its own rare beauty.  The streams have but the mudstone surface into steep gullies with the flat sheets of Millstone Grit providing resistance to erosion at their base.  On the way up we met and talked with a farmer, still hale and looking after his sheep in his late seventies although none of his children will follow in his footstep; it’s a hard life and the rewards are not those of mammon.  The land here is redolent of the rich varieties of human interactions over the centuries.  Its fecundity has been cyclical in nature and you have to ask  (Chris did) if the waterways could yet again, be a source of power in an age no longer mediated by the coal that underlies the hills and whose residue is now seen in the greened slopes that in my youth were harsh slag heaps.

The industrial aspects are fascinating but there is also a profound political history set in the landscape.  The banner picture shows me framed in the mouth of the Chartists Cave.  The arch is formed by Millstone Grit and the gave is formed by eroded limestone.  It is challenging to find, large as it is you only discover it when you are on the verge of falling into it.  Its human use goes back to the Bronze Age or before but in the more recent past, it was used to store homemade weapons by the Chartist Movement, as well as being a secure place to meet. The 1839 Newport March saw some protestors arrested and in the attempt to have them freed the Army was deployed to open fire on the crowd killing and injuring several.  The leaders were condemned to be hung, drawn and quartered (that barbaric English punishment for ‘treason’) but were later, reportedly after the intervention of a very young Queen Victoria, commuted to transportation for life to the penal colony of Port Arthur in Tasmania.  According to the oral history of my family, two of those transported were relatives and I’ve made the pilgrimage to their common grave on the Isle of the Dead.

The People’s Charter was a campaign for very basic civil rights and o its six clauses, five are now commonplace and universally accepted. although it took the best part of a  century for those rights to be won.  The first charter was signed by 1.3 million working people at a time when the total population was under 13 million but the Parliament of the time refused to listen to their peaceful petition.  By 1842  the second petition had over three million signatures but was again ignored by Parliament. Marches, strikes and the odd riot finally drove basic reform.  Freedom then, as now, is hard-won and regrettably hard-fought.  Merthyr Common stands adjacent to more popular hills, the circular walk of the main summits starts from Neuadd Reservoir just up the road from the Red Cow Inn (good beer good basic food) at Pontsticill.  The Brecon Mountain Railway Terminus sees many a tourist who remains blissfully unaware and engaged with the history that lies a short climb to the east.

We’ve walked it informed not just by the map, but by 18th/19th Century tithe maps, books on geology and history.  To be a part of that history, to see your place in it is part and parcel of what it means to be human.  It is the Cynefin concept, the place of your multiple belongings.  To walk the mountains for physical pleasure alone is all well and good, but to see the patterns of evolution in the landscapes is to see so much more.

And for those interested – here are  my walking companions Paul, Chris & Brenda  (by a sluice gate) and the paths we took (the linear one was just Paul and I  – although ‘path’ is a misnomer.  Mostly it was wading through bog and heather. 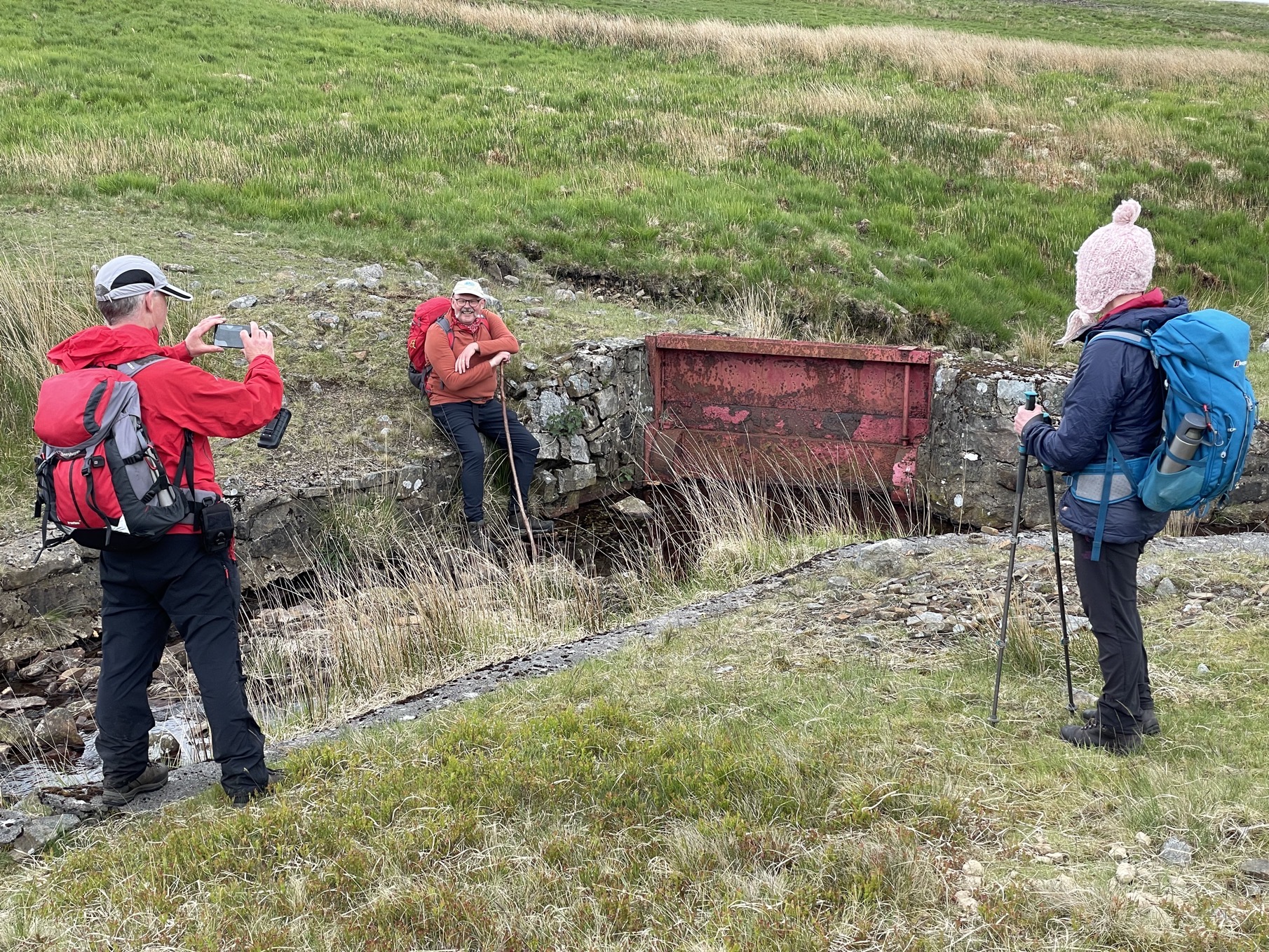 In my last post on the value of walking, and my Wainwright quest in particular, ...

I wrote about the significance of HTLGI in my Christmas Blog series on sacred places ...