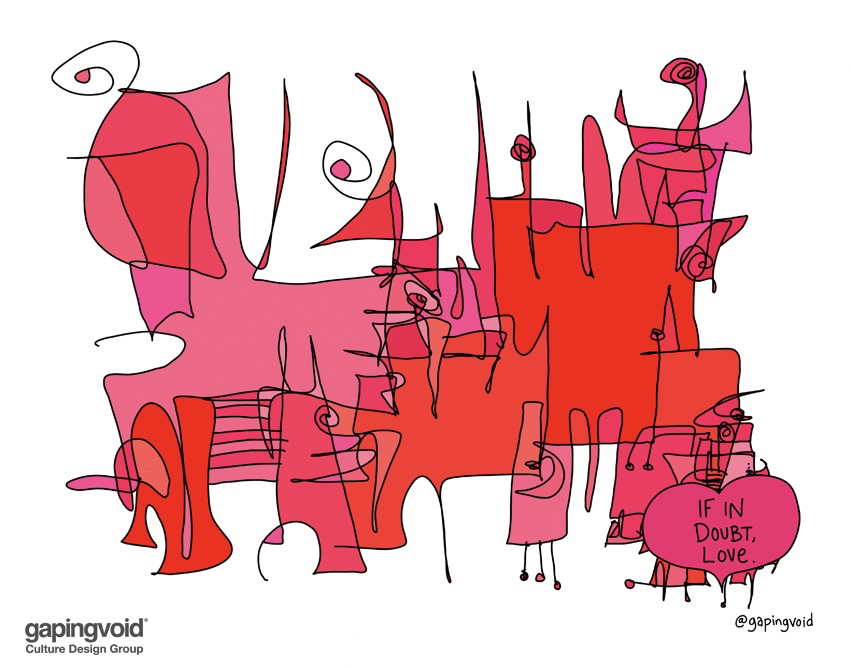 Love is one of those words which has so many meanings in differencing contexts that any exposition on the subject has to start with definitions. The greeks distinguished kinship, romantic desire, friendship and divine love. The development of the ideas of courtly love in the middle ages creates a literary fiction that has had multiple consequences in modern entertainment. One of the first essays I wrote at University was on the aesthetics of love and I wish I had kept a copy as I was very naive in those days and I have recall some original insights. It got an A, but with a comment that next time would I please focus on the question. At one level love is a profound concept, a sense of obligation and commitment to something that lies beyond self-interest. At another it is trivialised as a biological urge in the crude linear materialism of the neo-Darwinists.

The Gaping Void email takes about personal interaction, but I want to take a different perspective. I want to look at the ability of our species to show altruism outside of a kinship group, to sacrifice not just for a child, but for an idea. Something that is both noble and ignoble, but distinguishes us, or rather should distinguish us from the crude linear causality in which any quality is meant to have a specific evolutionary purpose. It links in with our developing project on meaning and identity. We have a need and ability to see something greater than our own immediate interests. A sense of the other, a sense of the holy (which I am not using in a purely religious way), a sense of transcendence.

In some ways this builds on my post of yesterday when I bewailed to diminution of judgement. The new Aristotelians would argue that we need to train people from a young age to exercise virtue which of itself gives rise to sound judgement. We live through and create meaning through the abstract, not because it is separate from the concrete, but because it allows us to engage with reality in a more inventive and meaningful way. Whatever the application the insight is sound; if in doubt, love.

I’ll leave readers to get the reference in the title …

One of the deeply negative aspects of the knowledge management period of a decade or ...

I’ve been teaching a masterclass her in India to a mixed group and took the ...