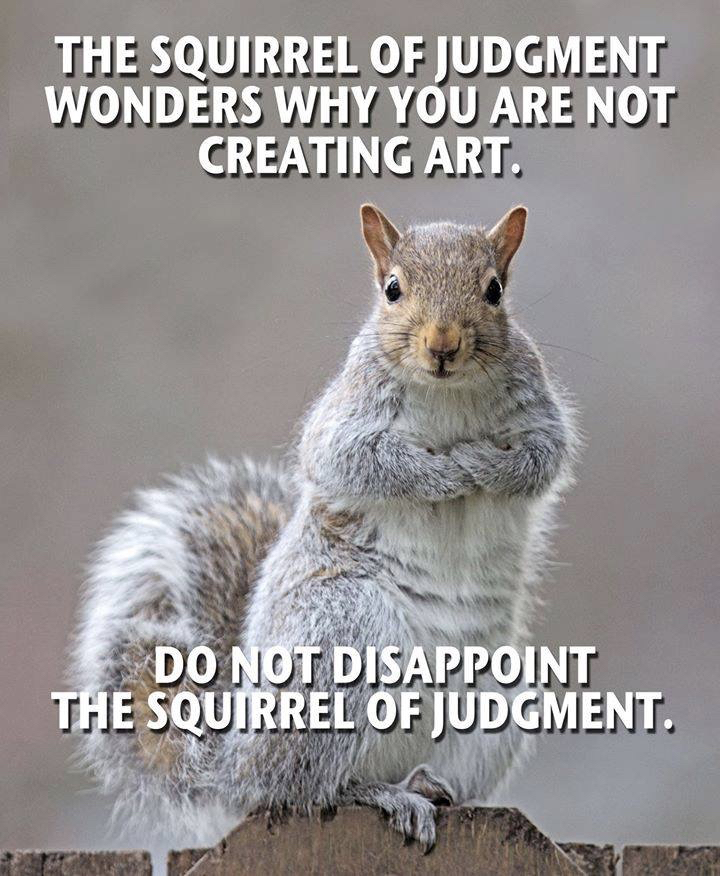 Sometimes one of those viral images on Facebook is just too good not to promote and I love this one. It popped up when I was working in New York on the role of art in social change but even without that it would have caught my attention. A brief google search shows no clear origin although there might be a link to the addition of a happy squirrel card to the Tarot deck. I have thought it might be linked to William James and pragmatism. He saw pragmatism as a method of “‘method for settling metaphysical disputes that might otherwise be interminable” and the one he addresses in that paper involves a human witness, a squirrel and a tree. If anyone knows please tell me! I can’t find an occurrence before October 2016 so I think its recent.

It does allow me to address the importance of art and aesthetics in meaning making. Some of this links to the importance of abstraction/art to human language and innovation. By shifting to a level of abstraction we can make novel and unusual connections between things. We all have our personal preferences. I use different types of music in background when I am writing articles and the type of music influences the writing style. The ability of opera to transcend the mundane provides not only an escape from the humdrum, but a place, or space, where I can think in a different way. Poetry triggers different linguistic forms which in turn allows new concepts. The simple act of drawing a framework (such as Cynefin) and talking about it has on several occasions produced new ideas and ways of working.

I could go on, but the need for abstraction in humans may have had accidental origins but it has major evolutionary advantage. If we reduce education to the acquisition of STEM capability without associated education in the humanities and the arts is foolish, ironically it will also reduce inventiveness and originality in the STEM skills. Why train kids to code? By the time they grow up most of that work will be done by AI systems. My headmaster taught us how to use punch card machines on the same evidence as people are now arguing for coding skills. But the physical environment and art are critical to cognitive development in the formative years, especially under two where personally I would ban all computers and limit television.

Without art we are dumbed down brutes so lets respect the squirrel, but ideally go red not grey ….

7 responses to “The Squirrel of Judgement”

I was sat in the lounge at Changi airport today between flights having briefly entered ...

Integration and an alarmist implication