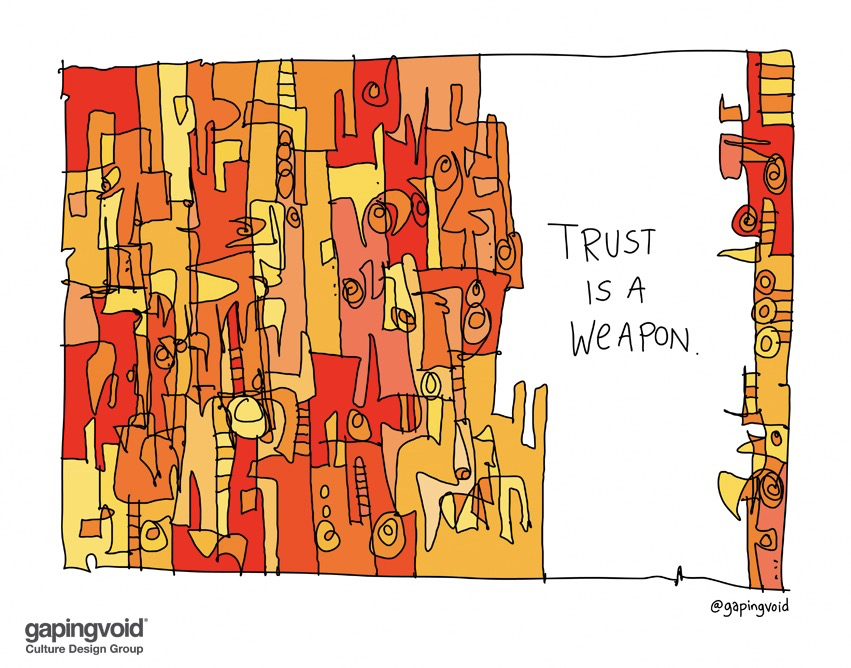 A weapon is defined by the Oxford English Dictionary either as A thing designed or used for inflicting bodily harm or physical damage or as A means of gaining an advantage or defending oneself in a conflict or contest. The Cambridge Dictionary (I want to be balanced here) defines trust as: to believe that someone is good and honest and will not harm you, or that something is safe and reliable. So there is a degree of ambiguity in this cartoon, what does it mean for culture to be a weapon, or can/should culture be weaponised?

If I am speaking I define culture as the way we do things around here that we all understand but we can’t really articulate it when I am speaking. In an academic article I might take a different approach but that is still a good way of thinking about it. Culture is something that evolves over time, as does trust, and neither can be engineered, defined, enforced or mandated. A deeply imbedded culture creates a trust in the sense of predictability and confidence that is clearly a source of strength (I baulk a bit at weapon as it implies some hard to another). I was fortunate to grow up in a family where I knew that more or less whatever I did there was somewhere to which I could return and be accepted. That gave me confidence that I think I would not have had if I had feared rejection based on a tight moral prescription – and I tested the boundaries a few times when I was young. A community in which trust is simply a part of the way we are is one which huge resilience and capability.

In a medical or professional confidence that trust may come from the process of knowledge acquisition, the apprentice model of learning that links experience over time with theoretical learning and moderated practice. I don’t need to know someone if I know they are qualified and I retain trust in that qualification. But now we come to a modern problem; the over dependence on professional judgement and the over confidence of professionals which has often resulted in a breakdown of trust which is not easily repaired, to the detriment of society as a whole.

Trust is won over long periods of time but can be lost in seconds.

The biggest negative use of the trust word is when it is mandated. I remember being told in IBM that I was expected to trust my colleagues. In fact they didn’t mean that, they meant I had to give the appearance of trusting people while remaining politically astute. The verbal form was more important than reality. An issue with corporate values, idealised models of behaviour, competence frameworks and many other examples of tokenism that bedevil the modern practice of HR and OD.

If trust is there you don’t need to talk about it. If trust is absent then you need to act in such a way as to allow trust to rebuild. Trust is not a program that you can write, it is an emergent property of multiple small interactions over time. It cannot be engineered. It is not the gun, but the  esprit de corps that sustains communities over time.

PS: Using the daily feed from Gaping Void as a stimulus may just work out although I’m making sure I get some time to think before writing! I’m hoping Hugh doesn’t realise I am doing this or things may become challenging.

2 responses to “The trust word”

I’m half thinking of using the daily Gaping Void download to stimulate my posts this ...

A light touch on the tiller

So its day five of the Gaping Void blog month and today’s cartoon brings together ...