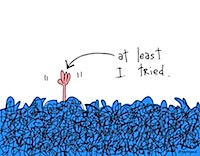 I’m late, possibly too late, in completing an article on exaptation in human systems. The final, final deadline was Wednesday and with a bit of luck I may make Sunday. At that time I will have to throw myself on the mercy of the editors. It is an important article in terms of the development of my thinking and I’ll be posting elements from it over the next week or so. In particular some insights from Constructor Theory in physics which I had the opportunity to spend time on at the recent Hay Festival. It will include some of the explanations behind the importance of high abstraction metadata which is a key element of SenseMaker®.

Writing an article can be done from a pure theory basis, but it can also use cases. My article with Mary Boone for the HBR started with a story and I am thinking of starting this article with my painful primary school memory as an undiagnosed dyslectic. Cases or stories can be used to set context, to pull the reader into the article before you hit with the concepts. The dyslectic story is an interesting one for exaptation, back in the 60’s no one knew about dyslexia and every word I misspelt in the weekly test earned me a stroke across the hand with an ink (or possibly blood) stained ruler. I have mild dyslexia which makes spelling difficult to say the least. Readers of this blog will know that if the spell checker doesn’t pick something up they I physically don’t see it. Kind individuals let me know and give me a chance to correct. The upside is the strong correlation between dyslexia and innovation. I often get frustrated that other people simply do not see what for me is an obvious connection between apparently unconnected things. I do that with concepts all the time, but I know that specialists in the relevant subjects find it difficult to see connections that I find self-evident. Equally I find the discipline they can follow hard or impossible, just as using words and letters in the right sequence can be problematic. Swings and Roundabouts as they say. The point of that case if I use it, is that making novel connections between apparently unconnected things is not easy of itself and needs us to find ways to disconnect ordinary perceptions to open up new possibilities. More on that in the article when I complete it.

So back to cases and their use and abuse. Most popular management books however abuse them, often they are no more than sung together third party cases in which aspects of those cases are used to support an often incoherent or inconsistent set of conclusions. You can end up drowning in cases despite your best intentions: see the Gaping Void cartoon which opens this post. It is one reason why it doesn’t take long to read most management books, skipping cases to real content or conclusions leaves maybe 10% of the text to read rather than skim. So what is the role of cases in writing? Well for a start they have great power to explain things as do metaphors. My preference is for the latter as a metaphor never gives you something you think you can copy but instead gives you a different way of thinking. But I use cases and will continue to do so. But they fall into two categories:

Keeping that distinction clear in your mind is key and the second is of course scientific method. The problem is that far too many management books confuse the two, using illustrations to prove a recipe (maybe also a theory) without seeking to validate the recipe by consciously applying it in practice. This failure is all too common. It was one of my criticisms of a recent book on organisations without management. Interestingly on twitter and other social media exchanges a lot of people seemed not to understand the difference. They tended to take the view that the book in question expounded an ideology they shared and the cases validated said ideology and the simplistic recipe book approach being advocated by the author. I’ve always found it ironic that contradictory management theories nearly always use cases from the same blue chip companies. Further the cases are in the main the result of self-reported success or interviews by a researcher with someone whose career was depending on the success of the projects in question. Researchers interviewing Chief Knowledge Officers get a very different perspective than field ethnography with the subjects of those knowledge programmes. We selectively report whatever our intent, and it is all to easy to simply pick up those aspects of a case which support something we want to believe.

So use cases by all means for their explanatory power, but if they didn’t arise from the application of your theory then don’t claim validation of your method. Also remember that theory can be validated from other sources than cases such as cognitive science or complexity theory. Given the capacity of humans to see the world the way they want to a limited number of cases may have less value than insight from scientific knowledge with a stronger claim to validity. In fact I would argue that the case based approach will only work in an ordered system. In a complex one the number of interactions and changes means that we have to apply theory rather than attempt to repeat practice. So its simple, what worked (the cases), do you know whey they worked (the science). If you have the latter you can create coherent cases of your own without following a recipe.

Yesterday I talked about the use of mass input to create micro-scenarios about the ...

One morning, upon awakening from agitated dreams, Gregor Samsa found himself, in his bed, ...