Twelvetide 19:02 A place of pilgrimage 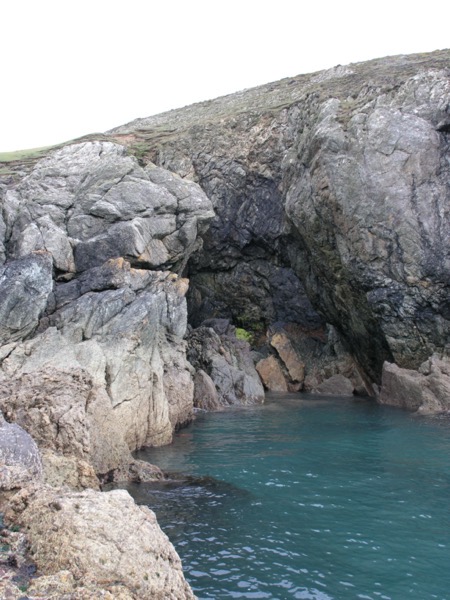 I have vague memories of early holidays.  I know, because I have been told, that the first was in Tenby.  I also have vague memories of a guest house in Rhosneigr on the west coast of Anglesey.: insisting in dressing before returning from the beach which included putting on a tie, and  of a truly disastrous pudding of bananas in custard where I think I caused a scene.  But summer holidays really settled for me when we started an annual three week trip to Porth Colmon on the Llyn Peninsula, a habit that continued until I reached sixteen when we ventured a Swiss walking holiday in Saas-Almagell.  A holiday extended by several days in Montreux while the car was repaired.  The beach at Porth Colmon was perfect for swimming, canoeing and sailing and we practiced all three.  When we first went them we had a pram dinghy called Blenny, after the small fish and a two seater canoe called Tarka, after the book.  Most days were spent on the water with my Nan occupying a favour and sheltered place in the rocks dispensing tea and sandwiches.  We variously stayed at the Pink Cottage, if it was available ,or one of two caravan sites in the area if it was not and we always had three weeks.  We made friends with other children went every year and I still remember feeling quilty when we arrived and unbacked our new pride and joy a small sailing one designer called Dabchick, after the bird.   It was a six inch deep frame covered top and botton with varnished making ply and I personally made the mast including internal channels for the various halliards.  With a jib and a mainsail  it was a real boat!  As we were unpacking it another brother-sister combo ran over to say they now had a canoe as well, named Salar (different book same author) expecting we could team up.    My parents graduated to a GP14 (called Aderyn, welsh for bird) which allowed us to take trips per for mackerel as well as sail.  All four of those boats (and the Fireball which followed) were built in our garage at home mainly by my father but with me as an apprentice.  These were sexist days, boys helped fathers in the garage, daughters were meant to help in the kitchen.  I learnt in later years that in Saas-Almagell my sister had been told not to ask for expensive Kuchen as money was tight, but the men of the household had to be provided for.

I listened to the live radio coverage of the Moon Landing in the caravan and was terrified and unable to sleep in a tent just outside said caravan after reading The Hound of the Baskervilles by the flight of a torch.   There was a whole ritual every year of going to the local lending library where we each had six tickets and were made to choose books that we could both read to last the period.  Longer trips were take with and without adults by boat to a remote cove to swim, light fires and feast.   My sister and I, with Tarka, aped the Swallows and Amazons and drew our own maps creating our own names in the Log of the Tarka, completed at the end of each day.  We were bound by a no more than 100 yards from the shore rule which to be fair demonstrated considerable trust by my parents.   One day we abused that by keeping to the rule but disappearing round the headland and out of site.   My defence (as the eldest I was blamed) that I knew about the dangerous tide race and knew how to avoid it just made matters worse.  I still wince when I remember my return to the beach.  We had two beaches: the Sandy Beach and the Rocky Beach.   The latter was for evening walks and stormy days.   Boats were collectively run up the beach on inflated rollers with all the families working together.  The other sailing boats  were an Albatross, an Enterprise and a Wayfarer with the odd visitor, but those were there every year.   One year a winter storm created a massive bank of seaweed and we had to dig and maintain passage ways.  There was always something new, the sea is ever changing.

It was not not just Orth Colman.  There are many memories of the whole peninsula.  We used to swap between north and south coasts to get the better weather, involving a half hour drive to Aberdaron famous these days as the parish of R.S.Thomas.   But for us it had an outstanding bakery, a surfing beach and was the source of boat trips to Bardsey Island, the Island of 20,000 saints, burial pace of Merlin and the end point for the North Wales Pilgrims Way.  Overconfident on one trip I jumped on the ferry boat, missed and landed in the sea in wellington boots and pretty solid clothing (it was cold).  My father was never forgiven for not getting a picture – he was laughing too much.  It was also the location of my parents Honeymoon and the boarding house they stayed is still there today.  We used to walk up to the headland and the Lands End of Wales and watch the clattering of choughs with their red bills and legs from the old WWII gun emplacements.  St Mary’s well (inset picture) is a fresh water spring that goes directly into the sea and is where my sister and I scattered our parent’s ashes.  For me it has always been a place of healing.  Somewhere I can return to at need and at will.  The whole of the coast is a delight to walk and in my memory the sun mostly shone, or there was a storm (which was as good if not better).

The ritual of a single annual point, a developing history creates a point of pilgrimage.

Both pictures are mine, the banner picture os of Porth Colmon approaching from the west taken in my round wales at 60 walk

all boats made y

I finally decided on the theme for my traditional (well I’ve done it more than ...

Twelvetide 19:03 and so to the land of the eagles

While my the first hill was Moel Fammau, my first mountain was Yr Wyddfa, the name ...