The crane in this picture was used in the recovery programme from Pearl Harbour, its located in the Navy Yard in Bremerton and I took it on the ferry back to Seattle after an enjoyable presentation yesterday morning.  There is a sense of history, and of seriousness when you work in military environments and this base is the largest naval establishment in the US.

I'd got the 0600 ferry out by the skin of my teeth without the opportunity to grab a coffee before leaving.  The stuff on the boat itself was not attractive so it was a real pleasure to meet my host April as I came down the landing jetty and to see her holding a large Americano out to me!  The whole journey was complete before dawn and the character of passengers, both those discharged and those loading early in the morning is always interesting on any ferry.   Some had evidently traveled a fair distance even to get the ferry and snatched 50 minutes sleep while they could.  A few people in navel fatigues read books and I think I was probably the solitary visitor.

The setup for the event was a good one.  Instead of turning up to present to a subject in a designated time slot I got to sit and listen to reports from their various change programmes.   They were of course enjoined to limit information given that I was a foreign national but the reports of small programmes trying to make a big difference – and succeeding – were an inspiration. 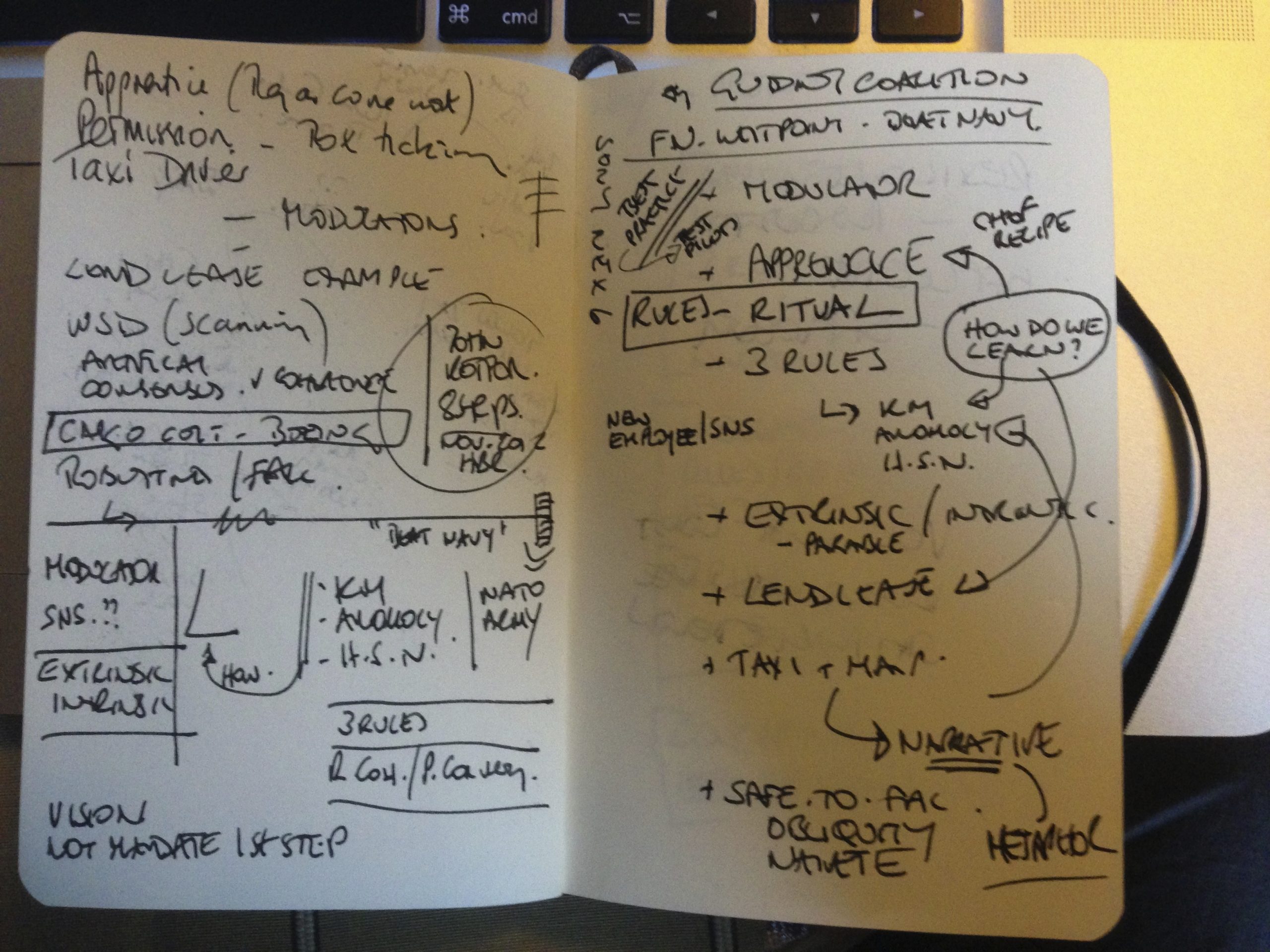 My job was to pick up on the themes and present.  So say between a Naval Captain and a civilian head of service I was occupied in a frenzy of note taking, less on what was being said, but on what it suggested I should talk about.  I've loaded the first notes on the right to give readers an idea of the process.  A moleskin notebook and a Mont Blanc pen work best in part because they force a certain discipline on what could otherwise get out of hand.

In the last ten minutes before I stood up I had to work out how to open.  That was easy a reference to American Football being interesting to an Anthropologist not a sports fan handled the foreign national issue and the “beat navy' inscription on the West Point stadium notepad was a gift to get people laughing.  After that it got more serious and I used the three original rules of knowledge management to hand a series of observations around.  In that ten minutes I had also flipped the page and written out a summary of what I wanted to cover (see left). 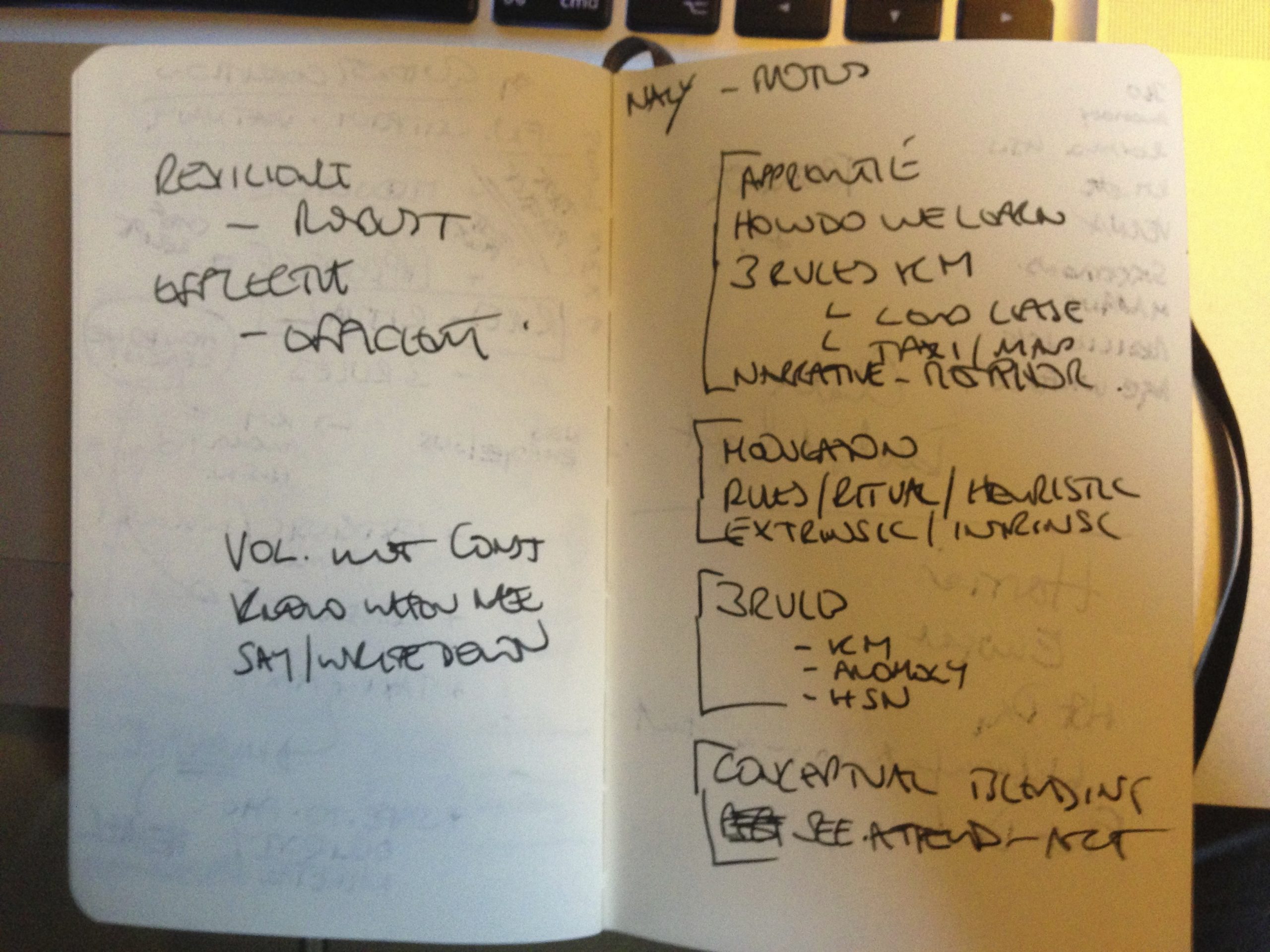 Now I love this style of speaking, it reminds me of the impromptu debating on which I grew up.  OK there is a fair level of stress in the preparation period.  Structure doesn't really come until just before you step onto the platform.  Also even with a structure you don't follow it.   After I started with the three rules (Volunteer not conscript, Only know what we know when we need to know it & know more than we can say, say more than we can write down) I realised that all my points could fit within that so I adjusted on the fly.  That is a lot easier to do than you might think.  The secret is to use teaching stories to give you thinking time.  There are some basic teaching stories and metaphors that I can tell (and entertain) at one level, while I thinking at another while flicking around the respondents in the crowd.  Respondents by the way are people you pick out in the first five minutes then use them to monitor how things are going down.

The main points concluded I pulled up one slide – the complexity sub-domain model of Cynefin and talked through it with an emphasis on the need for elders/managers to determine strategies to protect mavericks and disrupt entrainment.   I'm going to make some alterations based on that my the way as the framework is developing well and getting traction.  It all worked well and I got a standing ovation which was nice if unexpected.

I often think that conference organisers should think more about this sort of format.   If you have a good keynote they should be able to handle ad hoc work of this nature – if they can't they should not be keynotes.  It would allow cases to be presented then commented on rather than the normal procession of slides.  It might also satisfy those who have a problem with keynote presentation styles (although I know in some cases and suspect in others that some of the most voluble of the protesters are so because they failed to make the grade).

A walk around the park by the ferry terminal with April was a good wind down and then the afternoon saw a senior meeting in Boeing which also used the complex sub-domain model.  Its getting more traction and automatic mapping is something I will work on this week.  More on that meeting in 2013, the outcome is going to be interesting.

Stoned to death by cornflakes

As most people know the meaning of the word Cynefin  does not really translate directly ...

I'd hoped to publish the first draft of the complicated sub-domain today but I can't ...