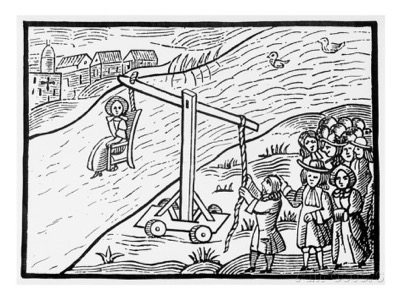 It is interesting to see old habits manifest in modern clothing. Back in the 17th Century it was easy to blame witches for any ill that befell communities. The ducking stool meant that the only way of proving your innocence was to drown. These days we seem to be applying the same technique with a series of scape goats who seem to be blamed for multitudinous sins regardless of logic and in defiance of reason. The need to blame someone is often an excuse not to change yourself. If only this evil person or thing was removed then all the problems of the life the universe and everything would go away.

Fundamental attribution error also comes into play. The belief that someone behaved intentionally in the event of any adverse at come and should be blamed for it. The Cows milk was sour; lets burn the old woman up in the cottage as she owns a black cat. One example of this surfaced on Facebook today from my good friend Euan. I say my good friend with some trepidation because towards the end of our exchange he said he was gradually losing the will to live… But never take on a philosopher with imprecise or ambiguous use of language.

So what was the cause of it, and who (or whom) was the modern day witch? Euan quoted from The Unconscious Civilisation by John Ralston Saul with a statement to the effect that the quote resonated.

Our elite is primarily and increasingly managerial. A managerial elite manages. A crisis, unfortunately, requires thought. Thought is not a management function. Because the managerial elites are now so large and have such a dominant effect on our education system, we actually teach most people to manage not to think. Not only do we not want thought, we punish it as unprofessional.

I took issue with the sentence “Thought is not a management function.” To me this is arrant nonsense and the confusion of managerialism with management. John is a polemicist so in context he was probably talking about the instrumental managerialist approach which has come to dominate a technocratic and neoliberal orthodoxy. With that I can agree, but the idea that it does not involve thought is foolish. You can make the case it lacks ethics and sustainability but not that it lacks thought. Also I know and have known (as does Euan and he said as much) many managers who think and do so to good effect. Not only that I know many managers who are ethical and care for their employees. Management is a key skill in a modern society, it should not be demonised. We also need to avoid these throw away condemnations that have to be explained away if challenged. It is all to easy to rush with the herd to the banks of the river.

The weather forecast today did not bode well: rain/Sleet at low level and heavy snow ...

Yesterday I argued that the confusion of managerialism with management was in effect a modern ...