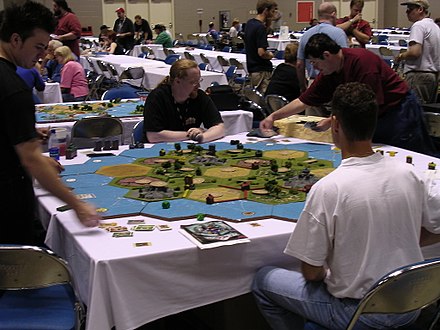 I’ve never really been a player of games.  I dabbled in chess when young and the family rituals on wet days on summer holidays involved Monopoly, Buccaneer, Sum-it, and the like.  To be honest, I was more interested in reading, debating, sailing, or walking. When computer games came along I was briefly enthralled by Space Invaders and from time to time threw an axe at a dwarf on the mainframe terminal when I should have been coding but I never could get excited by the activity.  In more recent days I’ve got interested in Settlers of Catan (illustrated left) in which a part of the game is to create the board and I am looking at ways to incorporate that into our planned development of facilitation kits for the rich set of methods we have developed over the years. But games have always had an adult purpose from political simulation to war games and that activity I have always enjoyed and also developed one game technique Anthro-simulation which involves human games masters controlling an eco-system where whatever you do, you fail.  You can tell I watched too much Star Trek when young!  Games provide a safe learning environment.

Anthro-simulation works by creating parallel teams in an open space who are presented with a current situation for which they have to complete a situational assessment and come up with a next steps action plan.  Each work area is miked up so the games masters can hear the conversations.  This is done for two reasons (i) to monitor how the decisions are being made for analysis and (ii) to allow the game masters to feed disruptive data in real-time to each group.  When a halt is called the teams are sent away for an hour and when they come back they discover that whatever they did turns out to be a disaster.  This is easily done, just pick up a weak signal that they missed and extrapolate it.  This is repeated three times and they all start to realise they are doomed.  Because it is happening in parallel to other teams this is not personal and by the end of the process, the amount of data being scanned before a decision increases significantly.  Failure engenders more learning than success.  Thought out the process all team members journal their experience as do the observers of each time into a SenseMaker® database.  That creates a narrative learning environment of simulation failures that can be used as a knowledge repository.

Linked to the idea of games is the displacement of confession into fictional story forms including the use of archetypes.  Archetypal story forms historically have been used to distribute learning of failure within the need to admit personal.  I’ve often quoted the stories of the Mullah Nasrudin, the wise fool.  In societies familiar with such stories if you do something foolish you create a story about how the Mullah did it, and it then spreads without attribution of blame.  In a lessons learned environment it is a powerful and easy-to-use technique, and more ethical than exhorting people to be open about failure as they have nothing to fear: a Darwinian technique to eliminated the fatally naive early on in their careers!  I was talking yesterday about resurrecting an old project designed to gather medical stories around the general theme of the day I know I first killed someone  Not an easy topic but the reality is that regret and hindsight often point to something you could have done differently.  By displacing those stories onto archetypal characters we effectively allowed people to use an actual experience, a synthesis of experiences, or just a just-so story to convey learning to the current and following generations.  People always get this wrong, they think lessons learned is a drains up search for the truth.  It isn’t, it is about creating learning and that can come from fiction as much as from fact.

So how does all of this link to our theme of post-crisis recovery?  Well first and foremost is that the trauma of the crisis will have generated multiple learning opportunities and those will fade over time.  So in our four-stage Assess-Adapt-Exapt-Transcend we need at the end to focus on learning and preparation for the next crisis., and also ritualise that learning as a means of understanding that we have moved on.  The initiation of a highly visible and mass engagement learning process is a way of signaling the end of a crisis and the need to move on.

So what are the key elements here?  Well I can think of seven, readers may think of more

As you see the process of managing and exiting from a crisis is also a process of creating a sense-making infra-structure that will sustain the organisation into the future.  Never miss the opportunities presented by a good crisis.

Banner picture is of the Lewis Chessmen in the British Museum released to under a Creative Commons Attribution-NonCommercial-ShareAlike 4.0 International (CC BY-NC-SA 4.0) license.

Opening photograph is of people playing “Settlers of Catan” use licensed under the Creative Commons Attribution 2.5 Generic license.

Transcend I: cadence and control

This is the first of two posts that deal with existing from a crisis, the ...

I’ve always been fond of wolves, something that is probably due to a childhood spent ...