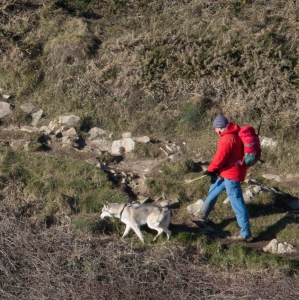 For those not familiar with the term it describes the various changes that take place in an eco system when the dominant predator changes.   The reintroduction of wolves to Yellowstone for example reduced the number of deer but also changed the behaviour of the deer, meaning that they avoided areas where predation was possible.  So the valleys and gorges repopulated with plants that had previously been eaten; bird life and diversity went up.     Coyotes killed by Wolves meant more small mammals and so on.  But then the rivers themselves changed as the banks were stabilised by recovering vegetation.   Less soil erosion, more stable flow patterns and so on.  I got all of that from a rather delightful small film that is more than worth the five minutes it will take you to load it and play it.

I was reminded of the story while on a 14 mile walk with Chris and his dog from Aberthaw Power Station to Ogmore Point today.  The dog in question was a husky whose one gaol and purpose in life was to drag Chris along at high speed (pictured).  Huskies are pretty close to wolves hence the memory jog, not to mention the fact that I like working dogs as they have a purpose and tend not to fawn or (as is the case with lap dogs) just be yelping and yapping pest.  The only time she even showed an interest in me was when I dropped some macadamia nuts at lunch time.  The rest of the time with the leash and taunt strapped around Chris’s waist she in effect pulled at pace.  Husky assistance is now up there with wind assistance in the category of cheating!

Now I am increasingly using dominant predator theory as a metaphor in describing different strategies that can be adopted in organisations.  Basically when the ecology shifts there is a niche for a new predator then, as the new ecology stabilises that predator impacts on everything else.  So in the 1980’s you survived in IT by feeding off what IBM left behind, then it was Microsoft and so on.  So during times of uncertainty you have a chance to make dramatic changes; during times of certainty you work with what is.   It is another very simple aspect of managing to context not to the idea.

It applies to organisations as a whole, but also within an organisation.   Re-engineering exercises often removed what they thought were superfluous levels of management.  In practice they removed the wolves, deer grew, vegetation suffered and the rivers changed.  It links in with a point I made recently about having to take more responsibility for the unintended consequences of any action (which includes inaction) in a complex domain.   You cannot be expected to forecast the particular consequence, but you know with absolute certainty that there will be some so you prepare for it.  Few things go according to plan and even back up plans have little utility if they are focused on forecast outcomes rather than creating system resilience.  So the more you engineer the more you risk damaging a key aspect of the ecology and the more likely are the unintended consequences.

Day two of the ETHOS event and we are starting to focus on applications both ...

Another walk today, this time with Iwan from Ogmore Point to Porthcawl.  I had originally ...